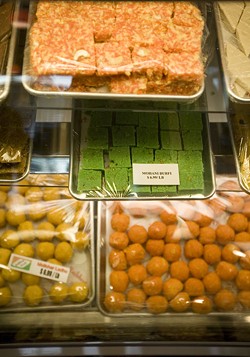 When I lived in Cairo, finding brown sugar to make Toll House cookies -- or any cookie -- became a quest and a standing joke among my European friends who could not understand why I would not make do with turbinado sugar. But molasses -- an ingredient of brown sugar -- is necessary for the correct taste profile of cookies.

Finding the sweets of childhood, or those special sweets that mark a holiday or a festival, is a common desire among ex-pats universally. What Southerner wouldn't want to find a Moon Pie in Mombassa? What Indian ex-pat wouldn't want bundi ladoo in Charlotte? The good news is that partners (and neighbors) Lakshmi Sarathy, a native of Southern India, and Prarthana Singh, from Napal, have brought the world of Indian sweets to the University area.

Last September, Sarathy and Singh opened a franchise of the New York-based Rajbhog Sweets & Snacks: Rajbhog Indian Food Market and Café. In addition to Indian sweets, Sarathy says she wanted to add "one-stop shopping," so she developed a grocery section as well. This section of the shop has an extensive freezer area and sells fresh Indian vegetables on Thursdays and Sundays. "They sell out quickly," she notes.

Sarathy cheerfully volunteers that opening this 50-seat store last September may not have been the best timing given the economic climate, but the Indian population of the Charlotte region has been growing over the past decade. She estimates that 14,000 Indian ex-pats live in Charlotte and 53,000 live in the area between Columbia and Greensboro. Rajbhog is the exclusive sweet shop in this region.

Rajbhog (loosely translated as an offering to a king) has as many as 60 varieties of milk-based confections, or mithai, tantalizingly displayed, at eye level for children, in glass cases. One customer, who drove from Columbia for mithai, studied the possibilities, then finally ordered a pound of bundi ladoo, a popular sweet the size of a ping pong ball soaked in a sugar syrup. Ladoo is commonly eaten during the religious celebration of Diwali, the Festival of Lights. In India, mithai is not eaten as a dessert, but savored more like a chocolate truffle. They are consumed at various times of the day as well as with afternoon tea. These sweets are the primary ingredients of social rituals: Traditionally, they're given as a gift from the bride to her husband's family.

In India, each community is known for a special mithai -- thousands of variations are available. Most are made with milk and ghee (clarified butter). Sometimes the milk is boiled until thick enough to be stretched. Other items are made with a flour, like chickpea, which is flavored with cardamom and nuts. In Rajbhog's display case are a rainbow of treats: green, yellow, orange, pink and white. Some shimmer with silver. Edible (albeit controversial) silver, known as varakh, is used to decorate the Bengali "king of the sweets." Rajbhog's mithai selection changes seasonally and all are made in New York by the parent company and sold by the pound.

The menu at Rajbhog also offers snacks (chaats) and fast food -- Indian street food -- from a variety of regions in Indian. Chaats, unlike many American one-note fast food items, have an Indian sensibility of balance: crisp to soft, tart to sweet, creamy to spicy. One of the best chaats at Rajbhog is the puri. This is a plate of fried spheres, slightly larger than golf balls, packed with a mix of cubed potatoes and onions sprinkled with bite-you-back chilies and spices, and then filled with yogurt, tamarind and mint sauces. The trick is to pop the entire orb into your mouth: You may go through napkins like a 5-year-old with his first sloppy joe.

Rajbhog is modestly priced -- even the grocery section. Lunch dishes cost less than $5 while most chaats are under $4. The highest price point is a two-meat dinner special with roti, rice, and a sweet for $9.99. Customers order at the counter, but food is delivered to the crowded tables. Customers pick up boxes of sweets or pints of ice cream on the way out.

Rajbhog's menu works hard to keep it simple with the usual suspects -- crispy samosas, a whole amalgam of chaats, a serviceable chicken tikka, lamb and chicken curries as well as a vast vegetarian selection -- all designed to evoke the vibrant universe of Indian street food.