Creators of lifestyle apparel company strive to make a difference

Aren't Millenials the worst? An entire generation of coddled, flaky, unambitious meme-crazy hipsters content to rest on the laurels of their useless degrees and blame the economy for their self-inflicted sorrows?

At least, that's what a barrage of widely-circulated newspaper and magazine articles in recent years would have you believe. It was this flood of negative publicity that pushed Calvin Cleveland and five of his colleagues to take it upon themselves to contribute toward the remaking of the Gen Y image.

"I was reading all these articles that were coming out and calling my generation out for not being hard enough workers, or for being under-qualified to work, but they weren't addressing the positive traits we have," says Cleveland. "I wanted to create a debate, to be able to back up my thought that you can't categorize us all under one umbrella. There are plenty of young people who are very ambitious but walked out of college and into an economic nightmare, realizing all the work you did in school doesn't necessarily guarantee what you thought it did. So, we have to think outside the box."

In a matter of months, the clothing company Figure of Speech (F.O.S) was born. 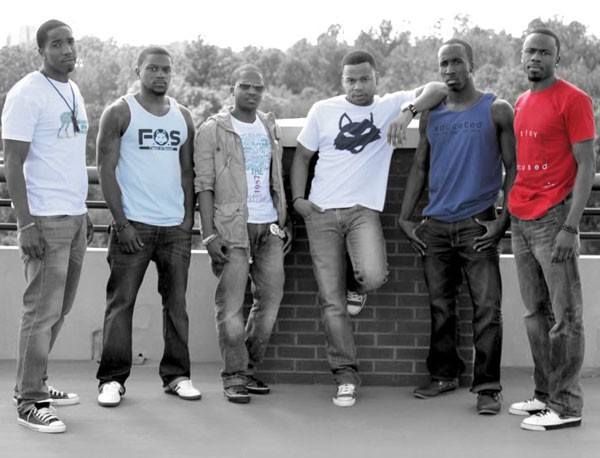 Conceived by members of UNC Charlotte's Kappa Alpha Phi and Alpha Phi Alpha fraternities, F.O.S is a lifestyle apparel company that strives to make a community impact. Each member contributes their educational background to the brand, covering everything from marketing to graphic design to Cleveland's own MBA.

"We factored all of our respected majors into the equation and it turned out that we all brought a different and important piece of the puzzle to launching the line," says Cleveland.

All six of the young men hold full-time jobs outside of their involvement with F.O.S; Cleveland has a position at Bank of America. "More than ever before our generation understands that fulfillment may not come through a desk job at a big company, that you don't have to go corporate to become you want to be. So we do three things at once to try and figure it out. If you focus on your hobbies enough, you can get the results you want, and F.O.S is a prime example."

Since launching the line in September 2011, F.O.S. has been successful at tapping into the market it aims to connect with. Its Greek tees and Element tees are the brand's best-selling items, and the recently launched fall line includes cardigans, hoodies, crewnecks, sweaters and henley tees.

Cleveland names "positive conversation" to be the brand's ultimate goal, with hopes of producing encouraging thoughts amongst them and their friends. "It is no secret that we often become a product of our own environment. It's essential that our environment consist of goal-oriented dream chasers, willing to plow through any obstacles in their way."

The company is committed to giving back to the community and has participated in multiple philanthropic events, even hosting its own all-star basketball game at UNCC to collect money and school supplies to give back to local Charlotte classrooms.

"We want to ride this out until we touch every single young person," says Cleveland. "We want positivity to be the fad."