To be young, broke and health-conscious

Despite a bad rep, Millennials are more often than not Generation Gluten-free 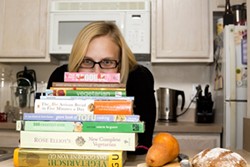 Self-entitled narcissists or open-minded do-gooders? Much ink has been spilled dissecting my generation, the approximately 80 million student-loan afflicted, social-media savvy youths known as Millennials. Pop culture pokes fun at our preference for all things cage- and gluten-free (see Portlandia's pilot episode or, really, any Portlandia episode), and the general consensus is that we're lazy, arrogant and emotionally stunted.

Conveniently left out of the conversation is the civic-minded approach spurring everything from our attitudes to employment to our culinary habits. One study, from business advisory firm AlixPartners, found that despite netting an average of less than $20,000 a year, 58 percent of Millennials surveyed said they are willing to pay more for natural/organic products. It's a pattern of consumption I see taking place every day; we eschew the cheap for the consciousness alleviating.

So why is a generation known for being saddled with stagnating pay foregoing the ramen in favor of the locally sourced stir-fry? The reasons range from increasing awareness of food industry practices to pride in supporting community growers. Here, CL gives three perspectives on being young, broke and health-conscious.

"Until about six years ago, I had the typical college diet — a lot of fast food and I loved a good bloody steak every now and then. At first, it was the whole animal rights idea that prompted my vegetarianism. I dropped the processed stuff and learned to cook for myself with the help of vegetarian cookbooks. At first, I was doing it on the fly; I'd find a recipe and go from there. It can be a little expensive at times; you have to set your priorities. Now, I basically plan a weekly couple of meals with the same ingredients. One of my favorite places is Home Economist. They offer bulk selection, so I can stock up on lentils or rice for cheap. Normally during the summer, I'll go to the farmers markets for all the fresh fruits and veggies. There's one by the airport a lot of people don't know about; it's open on Sundays, and you can get a bag of mangoes or something like that for about a dollar."

A.S.: "We're students so we can't buy all organic, but we try to follow the 'Dirty Dozen' list. It's this list of 12 fruits and vegetables that you should absolutely buy organic if you can. We don't have a lot of fancy things; we don't even have smartphones. We'd rather spend our money on eating healthy and supporting local businesses."

N.S.: "We go to restaurants about once a week. It's expensive and what restaurants sell you might be tasty, but it's not too good for you. I like really bad food that tastes awesome, but after you eat it you feel like crap. I've had so many of those meals that I know the consequences so we try not to do it that often. Three documentaries influenced me a lot on the way I eat; Simply Raw; Fat, Sick and Nearly Dead; and Food, Inc. Our generation has so much access to information about the food we eat that it's harder than ever to ignore the facts."

"I cooked a lot at college, which was an advantage over my friends. Most of their meals consisted of ramen or mac 'n' cheese, which I definitely ate my fair share of. One of my college roommates didn't cook much, but when she did cook she would buy all organic and local produce at fancy stores and would just forget about it. It would go bad quickly and she ended up probably wasting half of her food, so I ended up eating some of it. I try and buy organic when I can. I want to start trying to buy more in season because I've realized it is cheaper. I try to be conscious about the ethics of my dairy and my meat. I have friends who have chickens and when they lay eggs they'll bring me some, which is cool. Where we live [Eastway area] I can't go to the stores closest to us and get, like, ethically raised meat. The location of those kinds of stores is definitely in wealthier parts of town. A few years ago, everyone bought into the green thing. It's a fad in a way, and a privilege. But I've seen people in lower income communities becoming interested in growing their own food. I think it's a great way to feel part of a community."

*Disclosure: Walsh is one of the writer's roommates.