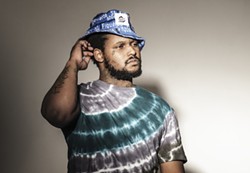 Growing up in L.A.'s drug and gang heyday, it was easy for Quincy Hanley to find himself in that culture. It was as simple as joining a friend on a walk to the park to join the 52 Hoover Crips, and it didn't take a lot of effort to make as much as $80 a pill selling Oxycontin. That was years before the man now known as Schoolboy Q's major-label debut, February's Oxymoron, would reach No. 1 on the Billboard charts. Back then, it seemed like everything except life came easy.

Known as Hoover Spank in those days, Hanley earned the nickname "Schoolboy" while successfully juggling a 3.3 GPA, playing high school football and hanging with the gang. But, as he explains in "Yay Yay," the promotional single from Oxymoron, "Had pistols in my hands / had pockets full of Ox... / I'm a drug dealing n---- cause them grades ain't get me paid."

Q, who will perform at Amos' Southend on April 26, is months into a world tour and plays a pretty defined role in the Top Dawg Entertainment crew.

If Kendrick Lamar is the front man, Ab-Soul is the mad scientist and Jay Rock is the OG, Q is the glue. His personality is what draws many in. If this were Animal House, he'd be John Belushi — the funny guy who doesn't have to seek attention but steals every scene.

Calling him the heir to the TDE throne wouldn't be totally true, but there's no question he's right behind Lamar. The real oxymoron of the Schoolboy Q story is how a lovable former Crip pulled off a No. 1 album and how he is now poised to break the bank, thanks to what most 27-year-olds don't have — patience.

Schoolboy Q has released two previous albums with TDE — Setbacks in 2011 and Habits & Contradictions in 2012. But Lamar's success with his 2012 album, good kid, m.A.A.d city, took TDE's Black Hippy crew to another echelon. The shelf-life of Lamar's platinum-selling album meant the rest of the crew would have more eyes on them. It also meant they'd have to wait their turn.

"He's the reason why I took so long," Q told Peter Rosenberg and Cipha Sounds during an extended sit-down on their podcast, Juan Epstein. "If it were up to Interscope [the major label], my album would've been out summer of 2013."

Don't get it twisted, there's no bitterness.

That bond made the wait easy. It also gave him time to perfect Oxymoron following Lamar's blueprint. Q spent all of 2013 trying to find four tracks that fit the album, hoping to take his album to the level of his comrade. Q's longtime fans understood a couple things ­­— he wasn't going to rush anything and they shouldn't expect a mixtape.

"Big, Pac, the greats, when you talk about greats, they never dropped mixtapes," Q said in that podcast interview. "They all focused on one project. Whether it took two years, one year, one month, five months, you put all that effort into one project. [Rappers] talking about, 'we working' because they did three songs in one night. This ain't '96 with Pac. It's too much shit going on with music now."

What the time on the sideline allowed Q to do is study. Understanding the process of creating classic music meant calling in musicians for live instrumentation or sitting in with engineers to sweat every detail.

Fans who've been along for the ride since the beginning of his career can hear a tangible difference between his early albums and Oxymoron.

What Q brings on the record is as hard as Jay Rock, but sometimes as groovy and conscious as Lamar. It's West Coast street stories, fluctuating between N.W.A. abrasiveness and lines as smooth as a pimp.

Now, those songs find themselves skillfully intertwined with harder tracks that reflect on a life lived with conflicting interests. It's customary for an artist to lay out their life story on their debut, but Q still isn't holding any punches three albums in.

Songs like "Hoover Street" and "Break the Bank" paint vivid pictures of his upbringing and what drove him to music, while "Prescription/Oxymoron" is a glimpse at his internal struggles with selling drugs and self-medicating. But, if there was still any lingering confusion, the first voice you hear on Oxymoron, Schoolboy's daughter, Joy, clears that up. "Fuck rap, my daddy a gangster," she says.

That's all she had to say.