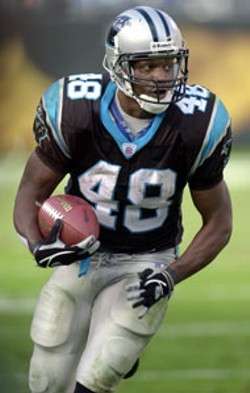 AUGUST 18 - WEDNESDAY
No longer "Grateful," The Dead -- former Grateful Dead members Mickey Hart, Bill Kreutzmann, Phil Lesh and Bob Weir, along with keyboardist Jeff Chimenti and two new guitarists, Warren Haynes and Jimmy Herring -- will perform at Verizon Wireless Amphitheatre at 6pm (doors open at 4:30pm -- the parking lot, of course, is half the fun at a Dead show). Tickets for the show are $39 and $49, available at the gate, by calling 704-522-6500, and online at www.ticketmaster.com. See our story in this issue. (Davis)

The Last Five Years closes CP Summer Theatre's season in a familiar way. Susan Roberts Knowlson and Patrick Ratchford are in luv again -- as they were in Music Man and Oklahoma! -- and once again, things have gone so wrong. Kathy, an actress aspiring to stardom, and her lover recount the development and dissolution of their romance. But one of them gets it backwards, which implies Knowlson and Ratchford will meet somewhere in the middle as they always do in musicals. Performances are at 8pm through Saturday night with a 2:30pm matinee this Sunday ending the run. Tickets are $15 at the Elizabeth Avenue box office where you can call between 11am and 3pm at 704-330-6534. (Tannenbaum)

AUGUST 19 - THURSDAY
Jake Delhomme, Kris Jenkins and the rest of the NFC Champion Carolina Panthers will take on the New York Giants at 8pm at Bank of America Stadium in their first home game (albeit preseason) since last year's last-second Super Bowl defeat at the hands of the New England Patriots. Tickets for the game are $29-$335, available by going to www.ticketmaster.com or by calling 704-522-6500. (Davis)

Off-Tryon Theatre Company unearths a vintage Kathy Najimy-Mo Gaffney concoction, The Kathy and Mo Show, through August 28, delegating Jennifer Quigley and Amanda Liles to execute the excavation. The zaniness of the duo's imagination and the feminist edge of their social commentary may not be as fresh as they once were, but there's still plenty of kick and bite left in this time capsule. Performances at 3143 Cullman Avenue begin at 8pm with tickets priced at $15 ($12 for students and seniors). Pay-what-you-can night is August 25. Call 704-375-2826. (Tannenbaum)

AUGUST 20 - FRIDAY
Dubbed Carlota n' Rock 2004 after Queen Charlotte, this is the city's first festival dedicated to Latin rock. The hope is that in a year or two the festival will eventually attract major international Latin bands that play rock in Spanish, while also giving a platform for local bands to promote their music in the region. Three local bands take the stage tonight for the inaugural event: Bakalao Star (ska and funk), La Marea (tropical rhythms, Latin rock) and La Rúa (Latin rock). The festival begins at 10pm at Skandalo's on Independence Blvd. Tickets are $10 in advance at all Don Pedro restaurants, or $12 at the door. For more information, e-mail larua@larua.net, go to www.larua.net, or call 704-535-3080. (Schacht)

AUGUST 21 - SATURDAY
He travels from town to town, playing (mostly) solo sets to small but appreciative crowds who hear in his husky baritone, oblique-yet-world-worn lyrics and passionate guitar playing that elusive confluence of words, music and meaning that most singer-songwriters seek in vain. And Richard Buckner does this nine months of the year. This has been Buckner's life for most of the last decade, and you can hear why for yourself tonight when he hits the Evening Muse stage for the 10pm show, armed only with guitar, some effects pedals, a loop sampler and one of the more emotive voices you're likely to hear. Tickets are $12. The Lindsey Horne Band opens. For more information, go to www.theeveningmuse.com, or 704-376-3737. (Schacht)

Soak up the sun and enjoy free live music for a noble cause at the 1st annual Lake Wylie Jam, from 12-7pm on the beach at Long Cove Marina and Yacht Club. The continuous entertainment includes five bands, a Panthers' Top Cats appearance, food, prizes, giveaways and a semi-famous songwriter and recording studio pioneer, Buzz Cason, who'll be on hand to play and sign copies of his new book. All proceeds go to Paramedics for Children. Go to www.lakewyliejam.com for more information.

AUGUST 25 - WEDNESDAY
Singer/songwriter John Mayer is a little breathy for my liking, but his ease on the acoustic and electric guitars and songwriting prowess deserve credit. Mayer layers his sometimes raspy and often whispered singing over folk-rock and blues numbers that usually evolve into singalongs. He has the gift of connecting with an audience, which has contributed to his meteoric rise. His "chicks dig me" persona also hides the fact the cat can play serious blues. Maroon 5 and DJ Logic are also on the bill, at Verizon Wireless Amphitheatre at 7pm. Tickets are $32-$42. Details: 704-522-6500. (Shukla)