From Bhutan to Charlotte with the King of Spicy 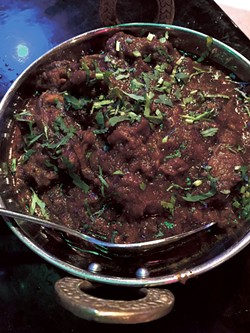 In Charlotte's supercharged culinary outposts of chicken tikka masala and dosas, is there room for a humble entertainment spot offering Nepalese and Indian dishes, live music or DJs, and a flank of billiard tables? That is the question posed by King of Spicy which recently opened in East Charlotte.

Entrepreneur Durga Dhimal, from the tiny Himalayan nation of Bhutan, but who lived in the Bhutanese refugee camps in Nepal, and his partners opted to create this Nepalese, Indian and Indo-Chinese (Hakka) hybrid. Dishes in Nepal, and Bhutan, for that matter, are heavily influenced by Chinese, Indian and Tibetan cuisines, only hotter.

Dhimal maintains this penchant for heat. The dishes are not Carolina Reaper hot, but spicy enough to make brows perspire. Customers may order a preferred heat level: either American (mild, medium, and hot) or Indian (mild, medium and hot). Our server advised us that American medium is equivalent to Indian mild.

A plate of steamed mellow momos is the friendliest entrée to Nepalese cuisine. Resembling Chinese dumplings or Japanese gyoza, these white flour dough delicacies — either vegetarian or chicken — are served with King's "special" zesty dipping sauce. Another regional specialty is the thukpa, the Himalayan love child of Japanese ramen and Chinese hot and sour, guaranteed to warm your bones — if and when winter actually arrives.

King's lengthy menu is rounded out with tandoor dishes and regional specialties from Hyderabad such as biryani, dosas from southern India, and chicken Manchurian from the Indo-Chinese section of the menu. All the usual suspects are here. But if you ask your server for menu suggestions, you might come away with chicken tikka or other ubiquitous Indian dishes rather than those from the Himalayas.

The kitchen's take on samosas, the perfect Indian street food, is simple, yet satisfying. After the audible crunch of the crust, the interior is butter-soft becoming immediately invigorated when dipped into either a suitably spicy mint or sweet tamarind chutney.

Main courses are generous, to say the least, and sharable. Although we had hoped for yak (none available here), we opted instead for the goat curry. "There are bones," the server warned. Good. We are all about bones since they deliver a hidden flavor that boneless meats cannot imbue. The curry is lush and dark with a heady aroma of sautéed onions, garlic, fenugreek, star anise, garam masala and ginger wafting from the serving bowl.

The heat sears the lips first, but the garlicy naan calms it down. So does a generous gulp of a delicious mango lassi.

For those not liking heat, the dishes here are not as nuanced, relying more on fire than subtlety. However, King of Spicy is definitely a spot for those who carry those "just-in-case" mini bottles of Tabasco. You just won't need it here.