Welcome to the 1950s world of CMS health education

Maya was three months old when her father ran out on her mother a few weeks before her parents were to be married. Maya, who asked that we not use her real name, is now 17 and a student at a Charlotte public high school. She has never seen her father, but says it doesn't matter. "My mom and I have a really good relationship. She's always been there for me," Maya says. "She's honest with me and gives me good advice. We just get along great. ... I hope I can pay her back some way when I'm on my own." 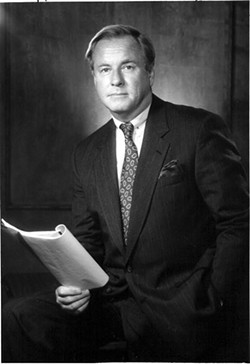 When Maya was in the eighth grade, her health teacher told the class that marriage was the only circumstance in which anyone should have sex and that "merely living together" was not acceptable because one of the two parties could just up and leave at any time. The impression Maya was left with was that "my mom had messed up her life by having me, and that the way we lived, just the two of us, was a terrible thing."

Unlike some students, Maya had enough self-esteem to shrug off the teacher's opinions. "I talked to my mom about it and I finally decided that if they didn't know any better than that, why should I pay attention to the rest of what they had to say (about sex education)?"

Josh, another high school student in Charlotte, is 18 years old. Like Maya, he asked us not to use his real name, fearing repercussions from school officials. As a young gay man, Josh considers the sex education he got in Charlotte Mecklenburg Schools "irrelevant at best"; at worst, he says, it was "a rough ride."

"The teachers always talked about how being in a marriage was the only acceptable way to be when you were ready to have sex," Josh says. "And they never mentioned being gay or lesbian. One boy brought it up one time but the teacher wouldn't talk about it. Here we were, in the sex education part of health class, and the way I am wasn't even something they would talk about, like I didn't exist."

Josh's parents sought counseling for him, but it didn't help much. "I probably thought about it too much and it got pretty depressing," he says. It took Josh a couple of years -- "and really supportive parents" -- for him to accept himself "the way God made me."

Maya and Josh were alienated by their public school sex education experiences because CMS follows North Carolina state guidelines mandating local school systems to teach an abstinence-based curriculum, as opposed to a broader curriculum termed "comprehensive." In Charlotte schools, abstinence is taught as the "best and only 100-percent effective" way to avoid pregnancy and sexually transmitted diseases (STDs). Monogamous, heterosexual marriage is touted as the only acceptable situation in which two people should have sex.

On the other hand, discussion of the various types of birth control, which begins in eighth grade, is fairly thorough, offering descriptions of each method and prominently showing the respective method's effectiveness and failure rates. Still, according to CMS Health Educator Merry Angela Gallo, students are not told where they can get free condoms. (One place, ironically, is the Mecklenburg County Health Department.) Actually providing birth control in schools is completely off the radar.

Changes to the way sex education is taught in North Carolina public schools came about as part of the 1994 national conservative shift in government. Newt Gingrich-led Republicans pushed for a sex-ed regime change in congress, and North Carolina was ahead of the curve. Thanks to Concord politician Robin Hayes, the legislature in Raleigh mandated that schools teach an abstinence-based curriculum. (See our sidebar for more on how the government got involved in what kids are taught about sex.)

The Charlotte Mecklenburg Schools' health education curriculum is called FLEBHS (pronounced flee-bus), short for Family Living, Ethical Behavior and Human Sexuality. It was developed in 1995 by a consortium of local educators, clergy, medical authorities and parents after conservative groups pressured then-Superintendent John Murphy for a strong emphasis on abstinence. Sex education is only part of the health curriculum, but as is the case in the rest of the country, sex has been the most studied and sensitive part.

CMS lesson plans for FLEBHS teachers repeat the "abstinence is the best and only 100-percent effective" mantra through all grade levels, a viewpoint not too many parents would disagree with, no matter what their political leanings are. But the lessons also evince a persistently conservative bias that places sex in a social and moral context that brings to mind the fantasy world of 1950s sitcoms. In Father Knows Best, after all, everyone went to church, drove safely, combed their hair and never, ever acknowledged the existence of divorce, single parenthood, gay men or lesbians.