Blowing smoke with the founder of Stoned Media Group

Six young people sit in a dark room looking at a projection screen depicting a chock-full itinerary for a weeklong business trip.

At first glance, it seems like any other meeting at any other media startup. The group discusses which tablets and technology they need to bring, the importance of not leaving chargers behind and how they plan to all launch their Snapchat accounts during the trip.

However, a closer look shows how Stoned Media Group isn't quite like other startups. Bongs sit conspicuously on desks and side tables throughout the office. Copies of the company's 2016 calendar lie about, featuring a cover photo of a Kardashian-esque woman posing in nothing but platform heels with a bong covering her crotch. And every once in a while, the conversation veers.

"I just want you to bring back enough edibles for me to have one every day for the rest of my life," says Rebecca Hourselt, operations manager of the company. "I do love those gummies, but I am not going to complain about a chocolate bar."

At Stoned Media Group, this is a normal concern.

"I have anxiety, don't judge me," Hourselt says, laughing, when asked if she's serious.

The trip these folks are planning isn't just any business trip, it's a trip to Denver to cover the weeklong goings-on surrounding 4/20, the stoner's holiday. Employees — who all wear multiple hats each that range from reporter to video editor to marketing rep — will be visiting a cannabis oil extraction facility and meeting with a company that produces THC-infused soda, among other adventures.

Stoned Media Group (SMG) is a Charlotte-based company that oversees a collection of cannabis-related websites ranging from Stoned Girls, a site full of photo galleries featuring naked women smoking weed, to High Finance Report, a weekly video featuring reporting on the week's latest pot-related news (cannabusiness, as they call it). 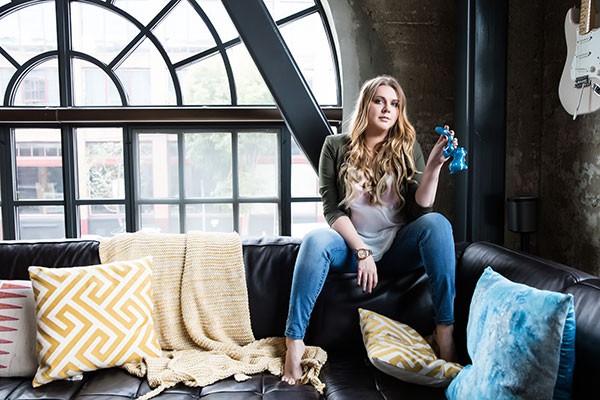 Breeanna Whitehead founded SMG in September 2014 with the help of an outside investor. She has made all the decisions from then on out, and has expanded the Stoned Media brand to five websites, with a new podcast and localized cannabis news coverage around the country coming soon.

Whitehead said that running her own company has been rewarding, but mixing the adult world with the cannabis world was a struggle.

In the beginning, Whitehead had trouble convincing respectable brands to connect with Stoned Media.

"You know who carried me at first? Drunken Stepfather and Celeb Jihad were the only two brands. Those were the only people that would fuck with us and that's where I had to spend all my money for a while. We came out like, 'We are these people, hear us roar, you will except us.' Then it was like, 'Oh shit. We have to compromise, we have to make some concessions.' I had a crazy awesome budget and I couldn't spend my money. My money was no good."

Whitehead and her small staff worked on legitimizing her safe-for-work brands, removing cross advertisements between her brands and making other concessions while all the time working at and sharpening their own skills at things like video production and site design until they gained the attention of others in the field. 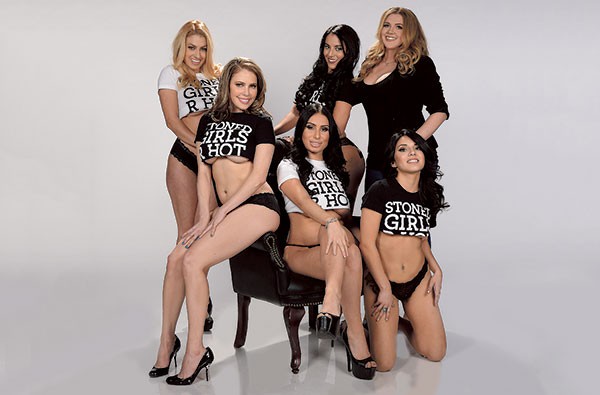 "We've done 18-hour days for three weeks straight before to launch a new brand or new project or because a site goes down," she said.

Whitehead expects a strong work ethic out of her staff, too, although they may not be dealing with the same things as someone in the corporate world.

"They have deadlines, if they don't get shit done, they have to stay late," she said. "But also, some days we smoke pot, some days we spend looking at naked girls. Some days I have to yell at people because we don't have enough vagina in a shot. A lot of times we take a step back and go, 'That's a weird sentence. Other people don't say that at work.'"

Hoursvelt signed on with SMG just a week after it began with the launch of its flagship site, Stoned Girls. She met Bree as a bartender in Charlotte, and likes to say that she's always worked for Bree in that respect. When asked for Hoursvelt's job title, Whitehead (who clearly hates job titles) called her a number of things, including her right hand, her go-to, her life partner and then, finally, her operations manager.

"At the end of the day, if I'm confident in nothing else in life, I know that Bree is going to be successful," Hoursvelt said. "So to be able to be along for that ride, I consider to be a great compliment and great opportunity that I wouldn't want to pass up for anything."

Hoursvelt, like everyone working in the SMG offices that Creative Loafing spoke to, is very proud of what the company has been able to accomplish in such short time.

"We are very good at what we do," she said. "I think that, especially being headquartered in North Carolina — which is apparently time-traveling back to where civil rights don't exist anymore — I think we have to be very good at what we do. Because of where we are located, and because of the legality issues with the adult industry and the cannabis industry, we did face some challenges, and it's quite impressive where we've come to."

For Kanesha Newsome, who came on with the company in February 2015, Whitehead's reluctance to limit her employees to a single job title is indicative of how the company works, and it's why she now enjoys her job far more than her past corporate gigs. 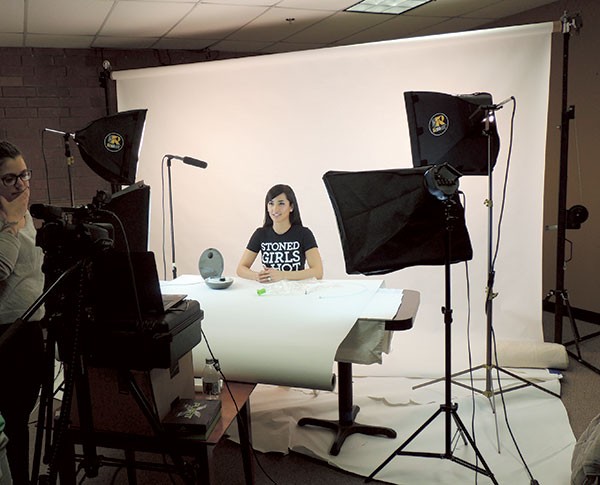 "Since it is a start-up company, you get assigned multiple projects. I'm originally a graphic designer but I do a lot of marketing here, I do a lot of writing," Newsome said. "In corporate, you have that role and you do that thing. If you do marketing, that's all you're going to do is marketing, you're never going to branch out. Here, I can always go to Bree and be like, 'Hey, I want to learn how to do more IT stuff,' and she will hand me a project and be like, 'Ok, here's your chance.' That's something that's different that I really like."

It's not just the full-time staff that's learning new things. Erinne Korado, a model who has hosted High Finance Report and product reviews on video for the past six weeks, said it's been an experience unlike any other in her career.

"I have not done anything like this before," Korado said. "I've done a lot of modeling before but as far as something where you're speaking and being recorded instead of just a motionless picture, it is different."

For example, during a recent HFR taping, the repeated use of the word "courier" in a story about cannabis delivery services in states where the drug is legalized led to an extensive discussion about pronunciation and a few slip-ups by Korado, but she took it in stride.

Korado said that beyond the skills she's learning, she's also proud to be the face of a company that reports on pot news. Although she doesn't smoke marijuana herself, she believes strongly in legalizing marijuana and is happy to be reporting on stories that could help lead to better understanding of the issues at play in regards to its legalization.

As one would imagine, Korado's desire to advocate for the federal legalization of weed is shared among much of the full-time staff at SMG. In fact, it's an agenda Whitehead would like to focus more on pushing in the coming year.

Although she calls the Stoned Girls site her "child" and says she would be "really, really sad" if anything were to happen to it, she is under no illusions about why the site exists; as a sort of funding source for her "more legitimate" media sites that she hopes can help push toward change. 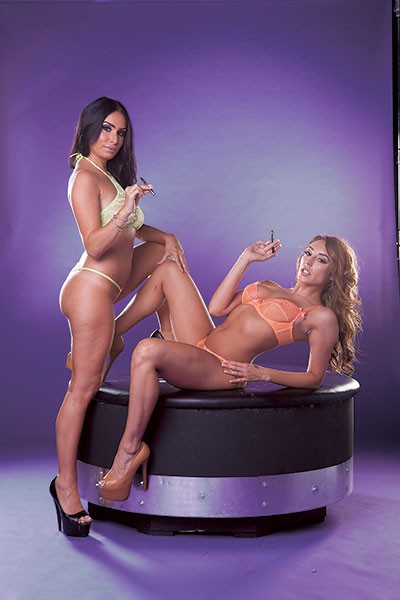 "[Stoned Girls] is not art. It's not art at all. For me — and I sound so cold when I say this — but it is a means to an end," Whitehead said. "We're not geniuses, we didn't create the idea of hot girls being naked next to something."

She says she had to focus on the capitalist approach before she could focus on the activist approach, but she's ready to make a push toward advocating for legalization, not only for its medicinal and social use, but for its use in the manufacturing field as well.

"Legalization has to happen. It has to for a sustainable economy," Whitehead said. "We're missing out on so much. I am big into climate change and one big passion for me is that marijuana and hemp cultivation could really change a lot. We have a very short window to change what the fuck is happening to our planet. So legalization and also the cultivation and larger biodiversity plan of hemp and marijuana is going to change a lot about the serious consequences we're facing right now. The amount of plastics that we produce now that we could be producing in a completely different way with hemp is something we have to think about, And it could bring a lot of manufacturing jobs back to America, where we're losing that now."

She says she'd like to begin publishing more op-eds and focusing coverage on politicians who are staunchly for or against the legalization of marijuana.

"We have a stage, we should use it," Whitehead said.

Speaking over the phone from Denver just before heading out to visit Love's Oven cannabis bakery on the Monday before 4/20, Whitehead said a blizzard that struck the city over the weekend put a bit of a damper on the trip.

Most events were cancelled or postponed, including a large rally expected to bring out as many as 100,000 people featuring live performances by Lil' Wayne and Wiz Khalifa.

The Stoned Media Group was undeterred, however, and continued to trudge through the snowstorm like the intrepid content creators they've become.

"On the marketing and networking side, we haven't done as much because we haven't been able to attend events with vendors. The snow was just too much," Whitehead said. "But we're still getting a lot of content and good interviews. It's been successful."

Must be the sativa.

The Stoned Media Group consists of five websites. Get to know them before wandering onto the wrong one at work.

High Finance Report — Erinne Korado covers the financial aspects of cannabis-related news. Clothes stay on. "I like it because it gives some legitimacy to all this novelty that we have going on," says SMG founder Breeanna Whitehead. SFW

Naked Weed Report – Sort of like High Finance Report with boobs. A model walks on screen wearing clothes, and by the time she's done reading you the week's cannabis news, she's naked! And you might even have learned something while she was stripping. NSFW

Stoned Insider — An aggregated news site that SMG will be developing throughout the coming months to be its home for exclusive content. "We want it to be a little bit more hard-hitting with the stories we get and profiles we do, just going a little bit deeper," Whitehead says. SFW

StonedTube — An aggregation of all weed-related videos from around the web. From how-to videos instructing how to roll a joint or do smoke tricks to music videos by your favorite always-high artist. SFW, but with a clearly-labeled NSFW section