Looking back at an impromptu Manhattan gig 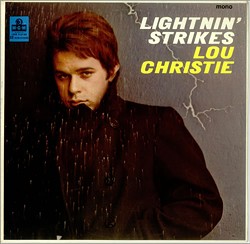 Although it may say something deeply disturbing about me, ever since I was little, I liked guys with high voices. Frankie Valli may have been the first man I heard suddenly shoot up into a wonderfully-startling falsetto, allowing me to intuitively understand that walking like a man and singing like a woman were not paradoxical at all.

Roy Orbison used to shoot up to the sky, too, using that gorgeous sound to seduce a woman he loved or describe desperately how nothing in the world could comfort him now that he'd lost her. Brian Wilson softy cried out to that gorgeous creature on the beach. Del Shannon shrieked to show how frightened he was, how his loneliness had made him almost crazy.

And then there was another unsung guy, named Lou Christie. His skyscraping notes were different. Even to a 5-year old, they sounded like sex. He may have looked liked an angel, but when he sang about fooling around in a car with the rain pouring down — even as a kid I knew his next move was not to turn the wipers on. He sounded like a guy who was desperate to have sex and then take right off for confession.

When I met him in 1987, I wasn't so poetic. We talked a bit and I told him how he'd warped my young mind. Then, I got to sing with him. It wasn't on Shindig! It was behind the Museum of Natural History in Manhattan. My friend Matthew and I, both trying to make our ways as writers in New York (which meant we were temps), decided to take advantage of the March cold-snap and play hooky. We were just standing around, smokings cigarettes, reveling in our freedom, when a familiar-looking guy started walking toward us.

He had a shag hairdo that was as multicolored and bizarre as some Baskin Robbins summer sherbet. But even with the heavier build, the leather jacket and the rainbow hair, I recognized the guy. I started to have a Proustian flashback that almost made me sink to my knees like a penitent. I probably should've had a rosary with me, too.

Christie was one of those guys who made a bigger impact on my childhood than any religious service. I forgot to breathe for a second. Then I called his name. Right there on Central Park West. After all, he was "Lou!" before another singer with the same name came into my life and got me all messed up with images of drag queens, speed freaks and loners living in SROs.

Christie (one guy, at least, keeping that name in good stead) came walking over. I introduced myself and he immediately took my hand, warmly, which made his rooster-like, rainbow-colored hair shake and shimmer in the early spring sunlight.

I told him how much I loved his anomalous, weird-sounding records, although in a slightly more prosaic fashion. Lou beamed. At this point, my shy friend, Matthew, stubbed out his cigarette and came over to say hello. Lou said he had just done a series of dates with that other icon of greaser cool, Lesley Gore.

Then, he asked a fateful question. "What's your favorite song of mine, Peter?"

I loved so many, since I first heard Lou wail "Two Faces Have I," a song, whose title, Bruce, uh, appropriated, when he cut the sorrowful masterpiece, Tunnel Of Love, about the dissolution of his first marriage.

But I knew it had to be one tune. One song only — "Lightnin' Strikes." Before I could rhapsodize about it — its gorgeous melody, great dynamics, it's trying-to-but-can't-quite-cum guitar solo, Lou just broke into it. Right there. On Columbus Avenue.

Suddenly it was 1966. And Mr. Christie sounded great. Plus, there was no way in the world I was gonna miss being his back-up singer. I mean, how many chances do you get to sing behind one of your heroes?

As Christie crooned, I got into position. Matthew joined me. As Lou sang, "If I see lips begging to be kissed," Matt and I shouted "Stop!" And when it came time for the chorus, we both got all girly and did the best falsettos we could muster, without having warmed up.

I kept thinking, "You don't have to die to go to heaven."

The whole thing must've gone on for three minutes. For me, it took in a lifetime. All the girls I'd loved, school, movies, great defeats, losing my virginity, my first confession, an infinite assault of images from my childhood.

Eventually, I figured out we were done. Mostly because about 20 people had gathered around us and were clapping. Who needed drugs or cigs? I had just sung back-up with Lou Christie.

With the timing of a pro, Lou shook my hand, patted Matthew's shoulder and waved to the assembled. While the applause grew louder, the man bopped off uptown, his shimmering, colorful conk shining and shaking in the March sun.

The crowd made some kind remarks and slowly dispersed. I looked at Matthew, in a state of catatonic happiness. He smiled slowly, sagely. "Now," said Matt. "Aren't you glad I made you take today off?"

I was still too high, too stirred, too ready to cry, to speak, so I just nodded. In my mind, that nod said everything. Matthew suggested we needed to come down and that we should go get a drink.

You know what? I didn't argue.