Sinners & Saints Are "Making It" in Charlotte 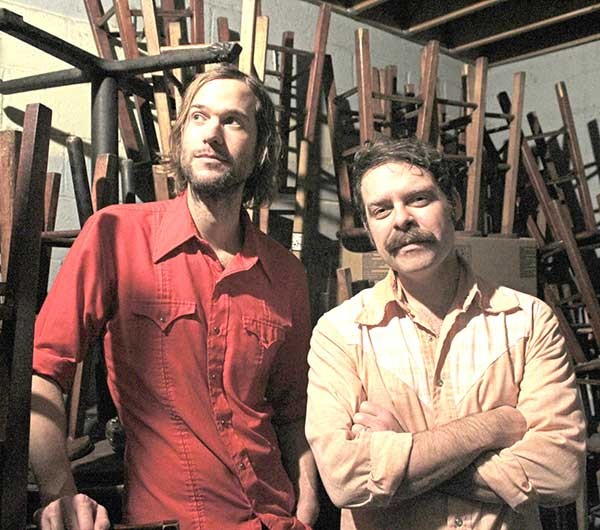 When their host, who was tripping on acid, started playing punk rock records on a turntable with no needle, Perry Fowler and Mark Baran knew they were in for a long night.

"But the guy was into it," Baran adds. "He was rocking out."

Fowler and Baran aren't exactly the "rocking out" types. They do play rollicking and sweetly sorrowful folk and country tunes as Sinners & Saints, and their second album, On the Other Side, which comes out March 10, takes their original songs in a more pronounced classic honky-tonk and country direction. Sinners & Saints play regularly in their hometown of Charlotte, but on March 14 they will set out on their most extensive tour to date, which takes them to places they've never played before — Texas, Oklahoma, Kansas, Minnesota, Iowa, Wisconsin, Illinois and Indiana. Upon their return to the Queen City, the two will throw an album release party at the Neighborhood Theatre on April 15.

Right now, Fowler, 39, and Baran, 35, are sitting in a quiet and comfortable room at Petra's, the Plaza Midwood bar Fowler manages and co-owns with three other partners (see sidebar). The warm, dimly lit room is a gallery off to the side of the performance space, lined with bold and colorful abstract paintings. It seems a universe away from that bizarre, acid-fueled night in Virginia Beach, where Fowler and Baran performed what they consider their worst gig ever in a rundown bar.

"Virginia Beach is a weird town anyway," says Fowler, who plays acoustic guitar, sings, and writes most of Sinners & Saints' songs. "It's part touristy, part Hollywood. There are a lot of people just strung out everywhere."

After playing their set, the duo discovered the bar owner wanted to renege on their guaranteed fee. By the time Fowler and Baran had haggled to get paid the full amount, it was 2:30 a.m. and they were focused on getting some sleep. Luckily, they had met a record label representative earlier in the evening who had offered to put them up for the night. The rep was at the gig to see another band on the bill, but also expressed interest in Sinners & Saints. Good fortune seemed to be shining on Fowler and Baran.

"Then we found out that (the label rep) had dropped acid earlier in the evening," Fowler remembers. "By the time 3 o'clock in the morning rolled around, he was on another planet. And we were going home with him."

At their host's house, the situation turned surreal.

"The guy wouldn't shut up and he wouldn't turn the music down," says Baran, who plays upright bass and sings harmonies. "He was doing coke and taking shots of vodka left and right."

"Then he started inviting prostitutes over," says Fowler, shaking his head. "We just wanted to find a quiet place to sleep."

The Virginia Beach escapade is an anomaly in Sinners & Saints' decidedly non-rock 'n' roll lifestyle. Both men are married, in their mid-30s, and hold down day jobs. Fowler is devoted to running Petra's and Baran is a freelance graphic designer. Despite this, they say, some people assume the duo are the kind of rambling, hard-partying traveling act depicted in vintage MTV videos.

Touring is "kind of boring," Fowler says. "You're in a van just driving until you get to the gig. Once you're there, you sit around and wait until you play. You play for 30 or 45 minutes, and when it's over, you go to bed because you have to get up in the morning and do it all over again."

"But that 30 to 45 minutes makes it all worthwhile," Baran adds.

"And we've met some of our best friends touring and playing shows," Fowler says. "You form an instant camaraderie and kinship with musicians who are doing what you're doing. You become instant buds."

The tightest of those friendships is the bond between Fowler and Baran. It began in early 2011, when Baran, who had played with the Americana outfit Buck Mountain Stranglers, the straight-ahead rock band Red Letter Blue and progressive rockers Mulaxul, went to Snug Harbor to see Fowler do a solo performance.

"I'll never forget that night because Perry's songs really hit me," Baran remembers. "His lyrics are deep, but they're easy to understand." Fowler can write catchy hooks with the best of them, Baran says, but his words connect on an emotional level. Right then, Baran knew he wanted to make music with Fowler. After the show he asked Fowler if he ever considered playing with a bassist.

"I went home and told my wife that I'd found my musical soul mate," Baran says.

For Fowler, Baran's interest in teaming up couldn't have come at a better time. He was getting burned out playing solo, and was considering taking an extended break from performing. Those thoughts faded fast, Fowler says, because he felt a partnership with Baran would be a rejuvenating shot in the arm. Fowler's only concern was about his own musicianship.

"I'm not a guitar god. I don't jam or play intricate fingerstyle," Fowler says. He figured Baran was out of his league. But his misgiving was put to rest when the two men sang together. Right off the bat, their harmonies attained the uncanny closeness usually reserved for fraternal or "blood" harmonies. As I noted in a Creative Loafing review of the duo's 2014 debut album Love and Misery, Fowler and Baran's "close-yet-distinct harmonies echo the Louvin Brothers', coupling soaring sweetness with the twist of a pocket knife."

"There's something about certain voices that, when combined, create something altogether different than what the two voices could ever do on their own," Baran says. "There are only so many times when you're singing with another person and you give yourself chills. I felt that with us."

Taking their name from the title of one of Fowler's solo albums, Sinners & Saints experimented with the addition of a fiddler, the Buck Mountain Stranglers' Chad Shores, who played on the band's first EP, Stupid Little Songs. Soon after the EP's 2012 release, Fowler and Baran decided to keep Sinners & Saints a stripped-down duo.

"Traveling, decisions and keeping track of schedules — it's all a lot easier with two people," Baran says. 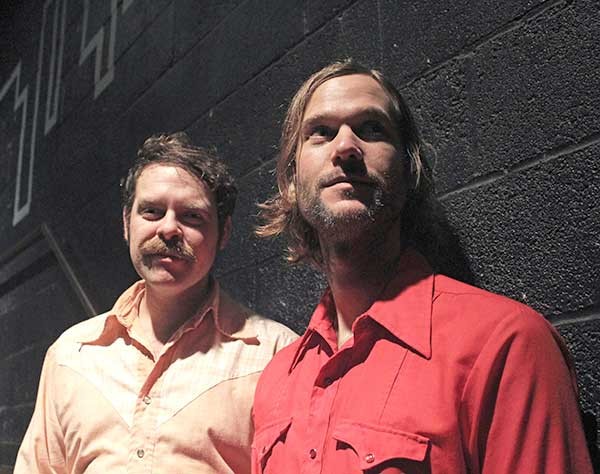 Touring and traveling is a subject that comes up often with Fowler and Baran. It's even the subject of "Music Man," a song on the new album. Over a gently rolling dosey-doe of bass, banjo and guitar, the duo's joyous harmonies intone, "Make 'em cry, make 'em dance, like they're the only ones who came to your show."

Sinners & Saints are serious about reaching out and welcoming new audiences. "I never wanted us to be local heroes," Fowler says. "I don't want to be just a Charlotte band. I want to go where the music takes us."

Next month, the band's music takes them across the Mississippi and through the Midwest. And the April, the tour will take the duo further afield than they've gone before. But they're careful not to just stop in for a visit and never return.

"You can't just go play a place once and mark it off your list," Fowler says.

"You have to plan to go back within a year," adds Baran.

At a time when the duo is working to increase their fanbase, On the Other Side turns Sinners & Saints' sound from mainly folk-based to more of a traditional roadhouse honky-tonk style associated with Merle Haggard and the slice-of-life storytelling of Don Gibson.

"Country may be the best description of us I've heard," Baran says. "We get classified as Americana a lot, but nobody really knows what that means."

Fowler doesn't mind being classified as country, but he feels there's a stigma attached to the genre, due to the sounds coming from contemporary Nashville acts. "The stuff now isn't even country," Fowler says. He sees it as a bad mishmash of R&B, hip-hop, and rock, with a soup·çon of country flavoring. "It's what publicists, disc jockeys and the Country Music Awards decided to call country."

With nary a pickup truck, a girl in cut-offs, a six-pack of brew or a party in sight, On the Other Side is a world away from bro-country. "I don't even think there's a dirt road in all our songs."

What the new album does best is tell tales of love slipping away and protagonists accepting their lot with down-home fatalism. But Fowler says the songs are really about happiness — the struggle to find it, or the willingness to embrace it when it's revealed.

"The pain and loss you go through define who you are," Fowler says. "Without those, you don't have any stories to write."

Within the wheelhouse of looking for love, Fowler turns some country music tropes on their heads. "Old Bones" is a breakup song that adds a forlorn hound dog to a traditional love triangle. The story is simple, says Fowler. "This couple gets a house together. Then they get a dog. The woman leaves. It's down to the man and the dog. And they're both miserable.

"But then the woman comes back," he adds, "because she misses the dog."

The jaunty tune ends with a loud and sustained canine howl, courtesy of Baran's dog Monk.

"Promise Land" is another song that tweaks expectations. As Fowler and Baran's entwined vocals roll to the sway of New Orleans zydeco, the lyrics may be telling the story of a couple separated by a journey — or they may be words celebrating immigrants and refugees on the move. Fowler is comfortable with either interpretation.

"Immigration wasn't on my mind at all when I wrote that song, but I'm not opposed to it being seen that way," he says. "My wife is Mexican. She's first generation, so her parents are immigrants." The topic gets him going. "I think we have to be careful how we label people," he says. "How can a person be illegal? They're alive and they're doing what's best for their families and themselves."

On the Other Side also includes two of Baran's songs. One is an untitled bonus track that's a whirlpooling classical-guitar instrumental dedicated to Baran's father who passed away two years ago. And "Ready to Go" is a sweet-tempered yet restless waltz written when Baran was on his lunch break at a shitty job. "The song is about wanting to move to the next step smoothly, wishing for things to happen," he says.

"When we formed the band," Baran continues, "both Perry and I wanted to take Sinners & Saints somewhere. We wanted to accomplish something, and I think we have. We're putting out albums. We're making good music."

That's where the album title, On the Other Side, comes in. "There's the idea that if you just keep working at something, eventually you're going to get to the other side," Fowler says. "But who knows what the other side is? Maybe there is no other side."

"Setting goals is important, but idea of 'making it' — that talk really bugs me," Fowler continues. "There is no 'made it.' You're making it. We're making it right now. We're still a band, we're still putting out records and we're still traveling. That's all you can hope for."

It's still early in the evening, but Petra's is starting to fill up. Where we're seated, music from the bar and the hum of conversation can be heard.

"Somebody asked me the other day what I was most proud of," Fowler continues. "I think it's this: Mark and I have been playing together for six years. We're been in weird and stressful situations, we've spent a lot of time together, and we're still friends. The fact that we still like to be around each other is a pretty big accomplishment."