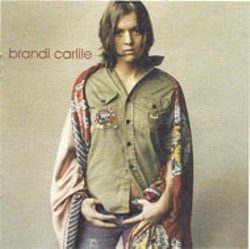 Brandi Carlile
Brandi Carlile
Red Inc/Columbia Records
When I saw the name Brandi (with an "i") and the cover image of a pretty girl in a Boy Scout shirt with just a tease of belly showing, I was skeptical. At best, the Indian-print blanket draped over her shoulders suggested Brandi might be a fake hippie; at worst, I figured her marketing team was positioning her as a grittier Jessica — or maybe Ashlee. Imagine my surprise, then, when I popped the CD into my car stereo and a husky voice — the likes of which I haven't heard from such a young singer since Maria McKee crooned "Don't Toss Us Away" — came out of the speakers. From the powerful, strings-drenched opener, "Follow," to the Simon & Garfunkel-like acoustic finger-picking of "Closer to You" to the bitter folk-pop of "Someday Never Comes," the first six songs are stunners. She has some growing to do in the lyrics department, but Carlile's warm, mature voice and wistful melodies compensate, propping up songs of love and yearning. The disc peters out toward the end, and the final four tracks — one penned by her band mates— seem like so much filler. But I haven't stopped playing those first six songs.

Frank Black
Honeycomb
Narada Records
Honeycomb's twang won't surprise those who know Frank Black beyond his role in the Pixies. For the past eight years he's been backed by the Catholics, working the intersection of rock, rockabilly and Bakersfield country. But Honeycomb is a different animal, with a quiet, understated Memphis soul vibe. "Today I felt my heart slide right into my belly, so I puked it up with liquor," he sings in the opening of "Another Velvet Nightmare." In this song, Black channels a bit of Tom Waits' barroom stagger. In the first single, "I Burn Today," he plies the spirit of Buffalo Springfield. But neither track is indicative of the album's tone. For that, you'd have to look to the piano-driven tunes "Go Find Your Saint," which has a bit of Nick Lowe's lyrical sneer, or "Selkie Bride," whose sulky pop-soul is given a classic Black melody, seductive and surreal. Honeycomb may prove one of his most enduring discs yet.

Stina Nordenstam
The World Is Saved
V2 Records
It's uncanny how some music seems to be sown directly from the artist's home soil, more reflective of national or regional character than any patriotic anthem could ever hope to be. The Kinks clearly hail from London. Tucson is Calexico's home. The Grateful Dead were from the Bay Area. Jeez, you don't say! Stina Nordenstam is from Sweden, which would be obvious even if you'd never encountered her name but just happened to hear anything from her sixth record; The World Is Saved feels more organically Swedish than anything by ABBA. Utilizing sparse instrumentation more in keeping with indie chamber or lounge jazz than typical Europop, Nordenstam's songs float past like winter snow drifts, ethereal and haunting. The arrangements — whether acoustic or processed (the latter recalling Beth Orton's work) — offer clean lines and precise structure, elements you'd expect from Swedish design. Unfortunately, Nordenstam's odd phrasing (think Bjork mailing it in) and deal-breaking voice — a breathy child's whisper suggesting either supreme indifference or jaded Euro-ennui — make the music suffer from a paucity of emotion. Too bad, because that's pretty essential to the songs' themes of infidelity, loneliness, murder and other human conflict. Then again, emotional reserve is another national stereotype Swedes can't seem to shake.

Prefuse 73
Read the Books EP
Warp Records
The Books' impressionistic glitch can sound like a babbling brook, a computer with heartburn or the remnants of a party heard from down the hall after you've already begged off to sleep. Prefuse 73? They often sound like that same party, as heard from the epicenter. Now, Scott Herren has added beats and instrumentation to various Books tracks. A simple enough task, you'd think, but consider: how do you remix the sound of real life? Answer: anyway you can. As a listening exercise, check out "Pagina Seis" and "Pagina Ocho," which take their impetus from The Books' "The Lemon of Pink" — formerly remixed on Prefuse's Surrounded by Silence as "Pagina Dos." It's said that everyone reads a Book differently. Consider this EP a peek into Herren's own particular literacy.