Private military companies turn a profit in war on terror 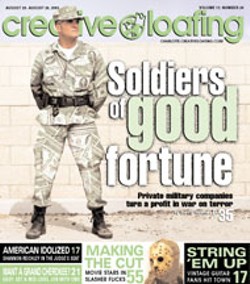 At a remote tactical training camp in a North Carolina swamp, six US sailors are gearing up for their part in the war on terrorism. Dressed in camouflage on a January afternoon, they wear protective masks and carry nine-millimeter Berettas that fire non-lethal bullets filled with colored soap. Their mission: recapture a ship -- actually a three-story-high model constructed of gray steel cargo containers -- from armed hijackers.

The men approach the front of the vessel in formation, weapons drawn, then silently walk the length of the ship. Suddenly, as they turn the corner, two "terrorists" spring out from behind a plywood barricade and storm the sailors, guns blazing. The trainees, who have instinctively crowded together, prove easy pickings: Though they outnumber their enemy 3-to-1, every one of them gets hit. They return from the ambush with heads hung, covered in pink dye.

"You had people hiding behind their teammates!" barks their instructor, Tony Torres, a compact man with freckles and salt-and-pepper hair. "That's as shameful a thing as I can think of. That's fucked up. That's just fucked up." When approaching a "bad guy," Torres reminds them, a unit must move aggressively, fanning out to divert the terrorists' attention. "You guys need to get your shit together," he scolds. "There's not a lot of cover in this structure. The only thing to do is move toward your threat."

The men listen attentively. They know that Torres, a Navy vet, honed his skills during nine years in the service, performing search-and-rescue operations and providing nuclear-weapons security. But Torres no longer works for the military. These days he's an employee of Blackwater USA, a private company that contracts with the US armed forces to train soldiers and guard government buildings around the world.

Every day, the Navy sends chartered buses full of trainees 25 miles from Naval Station Norfolk, the world's largest naval base, to the company's 5,200-acre facility in Moyock, NC. Last fall, Blackwater signed a $35.7 million contract with the Pentagon to train more than 10,000 sailors from Virginia, Texas, and California each year in "force protection." Other contracts are so secret, says Blackwater president Gary Jackson, that he can't tell one federal agency about the business he's doing with another.

As the US military wages the war on terrorism, it is increasingly relying on for-profit companies like Blackwater to do work normally performed by soldiers. Defense contractors now do more than simply build airplanes -- they maintain those planes on the battlefield and even fly them in some of the world's most troubled conflict zones. Private military companies supply bodyguards for the president of Afghanistan, construct detention camps to hold suspected terrorists at Guantanamo Bay, and pilot armed reconnaissance planes and helicopter gunships to eradicate coca crops in Colombia. They operate the intelligence and communications systems at the US Northern Command in Colorado, which is responsible for coordinating a response to any attack on the United States. And licensed by the State Department, they are contracting with foreign governments, training soldiers and reorganizing militaries in Nigeria, Bulgaria, Taiwan, and Equatorial Guinea.

This year, private military companies also played a key role preparing for the invasion of Iraq. They supply essential support to military bases throughout the Persian Gulf, from operating mess halls to furnishing security. They provide armed guards at a US Army base in Qatar, and they use live ammunition to train soldiers at Camp Doha in Kuwait, where a contractor, whose company ran a computer system that tracks soldiers in the field, was killed by terrorists last January. They also maintain an array of weapons systems vital to the invasion, including the B-2 bomber, F-117 stealth fighter, Apache helicopter, KC-10 refueling tanker, U-2 reconnaissance plane, and the unmanned Global Hawk reconnaissance unit.

In the war against Saddam Hussein, the military planned to use as many as 20,000 private contractors in the Persian Gulf. That's one civilian for every 10 soldiers -- a 10-fold increase over the first Gulf War.

Indeed, the Bush administration's push to privatize war is swiftly turning the military-industrial complex of old into something even more far-reaching: a complex of military industries that do everything but fire weapons. For-profit military companies now enjoy an estimated $100 billion in business worldwide each year, with much of the money going to Fortune 500 firms like Halliburton, DynCorp, Lockheed Martin, and Raytheon. Secretary of the Army Thomas White, a former vice chairman of Enron, "has really put a mark on the wall for getting government employees out of certain functions in the military," says retired Colonel Tom Sweeney, professor of strategic logistics at the US Army War College. "It allows you to focus your manpower on the battlefield kinds of missions."

Private military companies, for their part, are focusing much of their manpower on Capitol Hill. Many are staffed with retired military officers who are well connected at the Pentagon -- putting them in a prime position to influence government policy and drive more business to their firms. In one instance, private contractors successfully pressured the government to lift a ban on American companies providing military assistance to Equatorial Guinea, a West African nation accused of brutal human-rights violations. Because they operate with little oversight, using contractors also enables the military to skirt troop limits imposed by Congress and to carry out clandestine operations without committing US troops or attracting public attention.