The gang gets oiled up for a racy summer season!

Start your engines! As part of our annual guide to all things summer, CL is taking you on a cruise, NASCAR way, to meet a few of the more desirable guys and gals on the boulevard of broken rotors.

Racing, of course, is synonymous with Charlotte. Just check out the sights and sounds during Speed Street this week. Or drive by that massive speedway in Concord — it's a veritable shrine/castle to Carolina royalty. And it only gets bigger and gaudier each year. In fact, racing rakes in more fan bucks annually than any other sport.

With drivers who look as hot in bathing suits as these NASCAR newbies do, it's not difficult to understand why racing is such a hot ticket. So, buckle up and prepare to meet the lovely ladies and studly men of Creative Loafing's 2012 Summer Guide: The NASCAR Swimsuit issue.

Grant Enfinger is a strange and wonderful juxtaposition. A tornado of driving fury, he's also one of the most laid-back individuals you'll meet. Originally from sweet home Fairhope, Ala., Grant studied marketing at the University of South Alabama in Mobile. He says even though he always had a deep-seated desire to race, his parents "weren't about to let me get out of Alabama without a degree." He started racing go-karts at a young age, finished 4th in the Arca series last year, and now primarily races trucks and the occasional late-model car for BRG Motor Sports.

Although Grant says he rarely has time for anything other than racing activities, you might find him in the summer occasionally wielding a fishing pole, catching a sporting event or eating vanilla ice cream. "I used to love to get ice cream with my grandfather in the summer ... we are really close," he says.

When I ask Grant if it's true that all racecar drivers are "fearless," he admits to one major phobia: He's terrified of heights. "Watching the races from atop the trailer took awhile," he says. So we assume skydiving is not in his future.

"Hell no!" he says. With laid-back grace, of course.

For more info on Grant's world, go to www.grantenfinger.com. 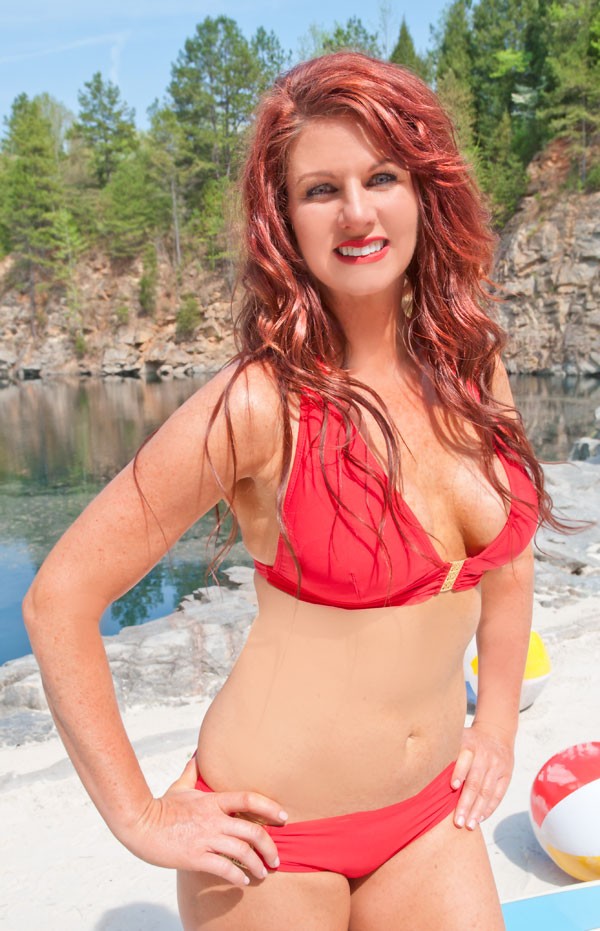 Born and raised in Kansas City, Jennifer Jo Cobb had one of those girly moms who coaxed her daughter into dance classes and frilly dresses. But Cobb yearned to be in the garage with her dad, tinkering on cars. She committed to becoming a racecar driver at 8 and started amateur racing in her early teens. Her first Arca race was in 2002 and she became, as she says, "hooked on the big stuff." In 2010, Cobb had her first full season, and she now owns her own race team and currently holds the highest point standing for a woman since 1949.

But the girly stuff paid off: Cobb also owns an online boutique and once was an alternate NFL cheerleader for the Kansas City Chiefs.

And like all nice rich people who've fallen on good times, Cobb is a philanthropist. Last year, she started Driven2Honor; its mission is to empower female soldiers and veterans.

When she's not behind the wheel in the summertime, you'll find Cobb at the lake with her favorite frozen treat: a margarita.

So is it true that racecar drivers are fearless adrenaline junkies? Says Cobb: "I was on Anderson Cooper in 2010 and Sanjay Gupta asked me that same question. I used to be afraid of failure, but then I failed miserably in business a few years ago and survived, so I'm over that now." She's also a racer grrl in an industry not known for its preponderance of grrls. Now, that's justly fearless.

Check out Cobb's online boutique at www.driverboutique.com; for info on her philanthropic venture, go to www.driven2honor.org.

Widely known as the First Twins of NASCAR, Angela and Amber Cope may look alike, but they have their own eccentric personalities, thank you very much. Hailing from a small town in Washington state, they've been in Charlotte for eight of their 28 years. They grew up racing go-karts, traveling across the Northwest, and eventually moving behind the wheels of more powerful vehicles. Their current team, SR2 Motor Sports, has them taking turns in the driver's seat.

But do these two pretty blondes get flack for competing in a world of big, bad racer boys? "We have been racing against men and winning our entire lives," Angela boasts. "We train with a trainer seven days a week." What do they think of people who say racing isn't a sport? "I don't really care what people think of it," says Amber. "It's something that we're passionate about. I don't consider golf a sport, but I'm sure I couldn't play it professionally."

In addition to racing, the Copes own a small salon in Mooresville and an online clothing boutique, where they sell women's apparel and accessories. The twins spend their free time in the summer on their boat, although Amber also enjoys lounging by the pool with her dog and six chickens. Rewind: chickens? They're "loving and beautiful," she protests. Hey — no problem. It's not any more, let's say, unique than her other quirky interest: mortuary science. Yep, Amber wants to be a funeral director when she grows up.

"This is the first thing that she has ever done completely on her own," gushes sister Angela. "I am so very proud of her." When Amber graduates, she hopes to open a funeral home in Charlotte called "Heaven," where she'll also offer cremation services for pets in a separate but equal crematorium onsite.

Do these two women, who collectively like chickens and funeral homes, wear heels while racing and pose for Maxim magazine, believe that all racers are fearless? Well, as long as bugs aren't involved. Angela is terrified of bugs — "even caterpillars!"

For more information on this saucy twosome, visit @amberangelacope and www.thevanillasalon.com.

Born and raised in Las Vegas, Gaughan comes from a casino family that raced in the desert for entertainment. He recalls a childhood playing in the sand while watching his father race. At Georgetown University, where Gaughan graduated with a degree in Human Resource Management, he played football, basketball and produced a college sports television show called College Football Magazine. Married with an 18-month-old boy and second child on the way, Gaughan lives in the Charlotte area now, but says Vegas will always be home.

Gaughan's proudest moment was when he made his dad cry with pride. "He is a big and tough guy. When I saw that, I knew that I was doing something right," Gaughan says. He's also won four truck series in a row, a record. "Winning my home track back in Vegas was another big moment for me," he says.

Gaughan spends his leisure time teaching scuba diving at Lake Norman. He and the family also take the occasional trip to their home in Colorado.

So, what of those naysayers who claim racing is not a sport? "I played college sports, and racing is much more difficult than football or basketball," he says. "Racing is both physical and mental, and furthermore the physical ramifications of a mental mistake are much greater. In football, you get a penalty; in racing, you wreck 25 people and someone goes to the hospital."

Is he fearless? He's a reasonable guy whose biggest fear, he says, is "hitting the wall!" Racecar drivers are like anyone else, says Gaughan, but they have to have "healthy fears." OK, maybe one of his fears is a little unhealthy: Gaughan, it seems, is terrified of rodents.

"My son will never be allowed to have a hamster or a gerbil." Race a car? No problem.

For some racers, motocross is the gateway drug. Meet Blake Koch, born in another NASCAR haven, Daytona Beach, Fla., and raised in West Palm Beach. An avid dirt bike racer from 9 to 18, Koch was so busy racing competitively that he was homeschooled his senior year to accommodate his travel schedule. After earning his associate's degree in marketing from Northwood University, he stepped into a racecar, competing for about two years in Florida before moving on to the K&N West Series. He made his NASCAR debut in 2009 and in 2012 was up for rookie of the year, finishing 18th in overall points. Koch currently lives in Huntersville with his wife; the couple are expecting their first child, Carter, in August.

Koch is a straight shooter. Simple, a man of few words, he offers just enough insight into his day-to-day life to get a glimpse of the man behind the NASCAR persona. He's a hunter, he likes to wake surf in the summertime and also — interestingly — is wild about racing remote-control cars. He's particularly proud of the several races he's won in that arena. In keeping with his overall straight-shooter vibe, Koch says his favorite summer treat is "plain ol' vanilla ice cream," though he admits he'll walk on the wild side occasionally and order up a Reese's Peanut Butter Blizzard from Dairy Queen.

As for the notion that racing isn't a real sport, Koch doesn't get too emotional or reactive. "Everyone has their own opinion, but racing is my favorite sport," he deadpans.

So does this rock of a human being fear anything? Yes. Failure. "It is one of my worst traits because it sometimes prevents me from trying things right away," Koch says. "Some things take a little longer, but I find a way to get there."

Could there be a more Southern-sounding name than Jeremy Clements? And it's true: he's a Southern boy to the bone, born and raised in Spartanburg, S.C.

Clements started racing when he was 7 years old, first go-karts, then dirt bikes, then he worked his way up to bigger and badder toys. He currently races for his self-named, family-owned team, Jeremy Clements Racing. Much of his funding comes from community sponsorships, one of the benefits of keeping the team both in the family and in his home community. Clement's accomplishments include entering the Arca series in 2007 and working his way up to the NASCAR Nationwide series. He hasn't yet won any major races, but he's "workin' on it!"

On hot summer days, you'll find Clements spending his leisure time on the lake or at the beach. "I just love to be outdoors," he drawls. Of course, he loves motorized water sports, too: jet skis, boating, yada-yada. And his favorite summertime frozen treats? "Frozen alcoholic beverages, shaved ice, or strawberry ice cream."

Being one of the newer kids on the NASCAR block, you'd think Clements may have a few fears left. You'd think right. "I'm not real big on snakes," he chuckles. He is big on roller coasters, bungee-jumping, and hopes to soon go sky-diving.

We love these racer folks, and young Jeremy Clements personifies why. They're so damn authentic — no irony, no posturing, just downhome enthusiasm.

"I just love to race and appreciate the opportunity to have been able to do it for so long," Clements says, then asks me to make sure CL thanks "my Twitter fans for picking me up when I'm down. It means a lot."