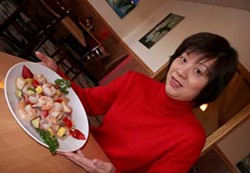 Chinese restaurant menus have always suffered from bloat: they're all over the place and filled with endless, perplexing choices. And then there's the other menu. My server at 88 China Bistro looked as if I had just unlocked the Da Vinci Code when I asked for that menu, the "secret" Chinese menu.

"We give that menu to our Asian customers, but Americans like this menu," he said pointing to the menu he had offered, yet beginning to sound more apologetic. He returned to the maitre d' station and talked to the owner. Soon, Kim Xiao excitedly arrived with the second menu. "This one is our Cantonese food," she offered proudly, then asked, "You know Chinese food?" I glanced at the new menu. The front was written in English and the back was in Chinese. The Chinese side was a bit longer -- it included the offal, I suspect.

The best food in a Chinese restaurant comes from this second menu. Having two menus is typical of most Chinese eateries, although some restaurants combine both menus to offer the choice to everyone. On the American menu were primarily Sichuan (Szechwan), Mandarin and Americanized Chinese dishes, such as General Tso and the likes. Sichuan cuisine offers two dozen distinct flavor combinations and more than 50 cooking techniques, hence the adage: "In Sichuan each dish has its own style and a hundred different dishes have a hundred different flavors." Sichuan dishes include the popular twice-cooked pork. Representing Mandarin cuisine are such dishes as Peking duck and sweet and sour soup.

As for Americanized Chinese, I never liked General Tso; he's too sweet for me. If you want to delve into the heart of Chinese cuisine, eschew the moo shu and order from the "secret" menu, in this case Cantonese.

Cantonese (aka Guangdong) cuisine is revered as the most sophisticated of all the regional cooking styles. For those who scoff at the frequently bland Cantonese food, remember that it was the original regal cuisine, a style of gentle healthy cooking. At times this cuisine may seem mellow, such as the lobster sauce, but when cooked properly the flavors remain distinct. After all, emperors didn't need stinky sauces and hot chilies to cover up the kitchen's pristine ingredients. The emperor's chef could showcase ingredients rather than obliterate them with too much heat and sauce.

It seems only natural that the Chinese menu in this establishment would be Cantonese. Owners Kim Xiao and her husband and chef Chung Lam are from Canton. Since arriving in Charlotte in 1989, the couple has worked in area Chinese restaurants. After years of putting in time for others, they opened the 60-seat 88 China Bistro in April 2005. This was the fulfillment of a dream and they named the restaurant after the Chinese lucky number 88.

Lam, who studied cooking in Canton, was the chef at Robert Lee's SouthPark restaurant Baoding for 11 years while Xiao was a server at another Lee establishment, Wan Fu. Xiao said the semi-retired Lee is now a frequent customer at 88 China Bistro.

The restaurant is in a strip center on Fourth Street near Presbyterian Hospital. The room, although tidy, was decorated on a shoestring budget: hard surfaces including booths, tables and tiled floor. A Japanese good-luck-cat figurine, the waving Maneki Nekos, greets customers, but the real warmth comes from the servers and owners.

Lam's competence is evident in the gossamer-like, almost translucent steamed shrimp dumplings, which were almost too delicate to dunk and eat. His simple, crispy sliced cucumber salad is much better than average with its super tangy glaze. The seductively seasoned watercress soup, a staple in the Chinese diet, is listed on the menu as serving 12, but you can order for two.

From the Chinese menu came the roasted duck, a sensational dish. With its exquisitely crispy skin and just the right amount of fat, the duck was hacked, bones included, into succulent finger food-sized morsels. Even better was the outstanding flounder. The meat is scooped out and stir-fried with vegetables, and then replaced in the fish's carcass, which has been deep fried. The heat of the deep fryer renders the slight fish bones softer and crunchy, almost the texture of a corn chip. This dish can handily feed three. On Xiao's insistence, we also tried stuffed cabbage leaves. This plate was beautifully presented with steamed baby bok choy surrounding the center of flavorful cabbage packages filled with chicken.

Chinese and domestic beers are available, as well as a few wines, by the bottle or glass. Most entrée prices are $9 to $14, including a choice of steamed or brown rice.

As people darted in to pick up their boxed-up orders of tangerine chicken, sesame shrimp and chicken lo mein, I wondered if they ever stopped to see what was on the other menu, the secret Cantonese menu. If they haven't, it's their loss.

Have a restaurant tip, compliment, complaint? Do you know of a restaurant that has opened, closed, or should be reviewed? Does your restaurant or shop have news, menu changes, new additions to staff or building, upcoming cuisine or wine events? Note: We need notice of events at least 12 days in advance. Fax information to Eaters' Digest: 704-944-3605, or leave voice mail: 704-522-8334, ext. 136. To contact Tricia via e-mail: tricia.childress@creativeloafing.com.