That burning sensation | Reviews | Creative Loafing Charlotte
Switch to the mobile version of this page. 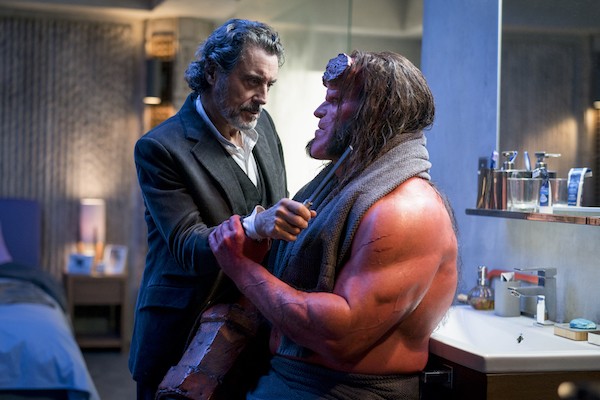 Refashioning this review as a church’s confessional booth, let me admit right off the bat that I wasn’t the biggest fan of Guillermo del Toro’s acclaimed Hellboy flicks. Bless me, Father, for I have taken the minority opinion: While I admired Ron Perlman’s irresistible performance in both 2004’s Hellboy and 2008’s Hellboy II: The Golden Army, the Hellboy-Liz Sherman relationship in the first film, and the cool critters in Part Deux, I found the storytelling clumsy rather than clever, the atmosphere oppressive rather than immersive, and, with a few exceptions, the characters colorless rather than captivating (even Abe Sapien didn’t exhibit much personality until he hired a new agent, changed his name to Amphibian Man, and reemerged in del Toro’s Oscar-winning The Shape of Water). Skimming my dusty review of the ’04 original, I even see where I wrote that its worst moments brought to mind the infamous 2003 screen version of The League of Extraordinary Gentlemen, a sentence that even I recognize as outright blasphemy.

With that off my chest — and with a couple of subsequent Hail Marys and a bout of self-flagellation, to boot — it’s time to admit that, in comparison to the new Hellboy (*1/2 out of four stars), those earlier incarnations of Mike Mignola’s popular comic series now seem positively heavenly. Functioning more as a reboot than as the originally planned sequel (axed once it became clear neither del Toro nor Perlman would be involved), this Hellboy represents less a hot night on the town and more a cold shower meant to douse excitable feelings that this flop has no intention of alleviating or even addressing.

As was the case with Spider-Man: Homecoming, the film’s creators were adamant about not creating yet another origin film. Yet unlike the Spidey saga, this picture is so awash in exposition (including, yes, a genesis sequence) that it would be safe to state that some fibbing was taking place. The picture actually opens even before — way before — Hellboy first climbs out of the bowels of Hell during World War II — it commences back in the time of King Arthur and Merlin, as they manage to defeat Nimue the Blood Queen (Milla Jovovich), hack her up into enough separate pieces to fit into an Evil Dead sequel, and bury the various body parts in separate locations so she can’t ever return. Of course, whereas a fool and his money are soon parted (e.g. those who paid a combined $162 million to see Grown Ups), the same can’t be said about a Blood Queen and her appendages, meaning that she finally returns in our present day to continue her reign of terror. It’s up to B.P.R.D. (Bureau for Paranormal Research and Defense) operative Hellboy to stop her, and he’s aided in his efforts by his adoptive father Trevor Bruttenholm (Ian McShane), a psychic teenager (Sasha Lane), and an agent (Daniel Dae Kim) who can turn into a jaguar when necessary (claws and effect, as it were).

Interestingly, I watched both Hellboy and The Kid Who Would Be King (now out on Blu-ray) on the same day – some sort of low-key cosmic alignment since both films deal heavily with the legend of King Arthur. The kid flick is by far the better bet, partly because none of its fantastical musings prove to be insulting like the liberties taken in this slog. And whereas The Kid/King is rated PG and del Toro’s Hellboy flicks were rated PG-13, this one is rated R. That in itself is no problemo, but the end result doesn’t resemble an R-rated film made by adults as much as an R-rated film made by teenagers who think it would be cool to pepper their project with as much profanity and as many gory interludes as possible. Hellboy goes even more overboard than Logan in adding naughty bits just for the, uh, hell of it — unlike, say, Deadpool, which did a great job of making its R rating feel like a natural fit, these other pictures bring to mind the adage, “Just because you can doesn’t mean you should.”

Neil Marshall, who kicked off his career with the terrific one-two punch of Dog Soldiers and The Descent (the latter making my 10 Best list for 2006), gets swallowed up by this dour and depressing undertaking, and it begs the question as to whether it was yet another case of an indie filmmaker turning drunk and irresponsible when handed a sizable budget or (as has been suggested) it was another sad instance of a studio not allowing a filmmaker to fully explore his own vision. In either case, it’s sad to see Marshall attached to this boondoggle, which admittedly does contain a few notable sequences (the entire interlude with the evil Baba Yaga is a high point) and committed turns by Harbour et al (only Jovovich fails to convince, coming across less like a formidable force of evil and more like Joan Crawford after discovering that her dressing room is too small).

As for the devil’s backbone, i.e. those wisecracks that often feel like Hellboy’s entire raison d’etre? The humorous quips in del Toro’s twofer weren’t always as funny as its makers intended, yet they come across as classic Richard Pryor when compared to the lame nyuks uttered by this film’s red-hued hero. “The only thing that hurts worse than being stabbed in the back is … being stabbed in the back.” Are those crickets I hear, or merely the theater auditorium’s a/c unit sputtering to life?