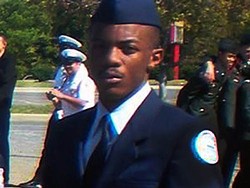 Aviation expert J. Joseph, owner of Charlotte-based Joseph Aviation Consulting, describes the inside of a plane's wheel well as having sufficient space for the teen to climb into. But once the landing gear retracted, it could've smashed him; that along with several other factors may have damaged his body.

"At the very best, it's risky," he said. "First of all, it is a very hostile environment, regardless of what the conditions are. The brakes are exceptionally hot — hundreds and hundreds of degrees as the aircraft taxies out. Once the wheels retract, that brake assembly would have been so hot. Then you're in an unpressurized environment with no oxygen in an airplane operating in the mid-30,000-foot range. Within a couple of seconds at that altitude, you become incapacitated. And then there are minus 30 to 40 degree temperatures at an altitude like that." (The broken plastic card found with Delvonte's body reportedly showed signs of exposure to extremely cold temperatures.)

Is that a risk Delvonte would've taken to get back to his mother in Baltimore?

According to his mother, as reported on Dec. 14 in the Boston Globe: "He was afraid of heights. He didn't even like going in a building that was high."

Chestnut added that Delvonte wouldn't have stowed away because his mother lives more than 35 minutes away from Baltimore Washington International Airport, and he just wasn't prepared for such a trip.

But in an interview with the Associated Press, Anthony Jr. said Delvonte's father "took away his cell phone. They were always arguing."

And another sibling told a similar story to the Globe on Nov. 21. According to the newspaper, a half-brother in Baltimore, Craig Tisdale, 18, said he thought Tisdale may have gotten in a car with two friends bound for Boston, hoping they would drop him off in Baltimore on their way north. But Craig's mother, Diane Turner, told the Globe that "we really don't know what happened" in the same report.

The Milton Police closed its investigation after Delvonte was identified, determining his death accidental. "You wouldn't believe it could happen in the year 2011. A 16-year-old kid, no money, no wallet, no ID — nothing," said Milton Police Chief Richard Wells. "He just gets on a commercial jetliner. If you've flown on a jet anywhere in the world post 9/11, you could understand why you wouldn't think that could happen. But clearly, as the investigation moved forward, one of the things that we discovered was that the window between the last time he was seen in Charlotte and found here in Milton was very small."

Meaning, Delvonte couldn't have traveled the nearly 900 miles between Charlotte and Boston by bus, train or automobile and arrived by 9 p.m. There was also airplane grease on his pants, and his handprint and fingerprints were found inside the left wheel well of the plane. And, when Milton Police traced the FAA flight patterns of the Boston-bound flight from Charlotte, it showed that the plane flew directly over the neighborhood where his body was found.

Though the case wrapped up in Massachusetts, putting together what happened during the last few days of Delvonte's life in Charlotte has been difficult for his family. Chestnut said access to Delvonte's friends has been tied up by Charlotte-Mecklenburg Schools.

"We think we can get a lot of questions answered if we talk to his friends. He was relatively new to Charlotte and he didn't have a whole lot of friends, but the ones he had, he hung out with a lot," he said. "From the way we understand it, we want to speak with the kids at school." CMS declined to speak to CL for this story.

Another source of contention for the family is the fact that after months of waiting, they've heard nothing from the airport.