Inside the wicked web of a Charlotte pimp

Rain was starting to fall when Carrie stumbled upon the abandoned, foot-thick bundles of Creative Loafing newspapers behind a garage on West Trade Street, across from the federal courthouse. Dozens of stacks were lying around, and Carrie pulled them together into a makeshift bed so she wouldn't have to sleep on the wet ground. She covered part of her body with a jacket and the rest with more pages of the paper.

Up until a few days before, she'd been sleeping in an empty house with running water, which worked out well because she could get up and take a shower before she went to school in the morning. But the owner of the house found out and had Carrie arrested. Somehow, all this fell through the cracks of social services. 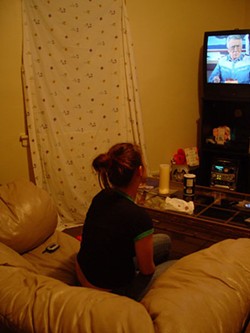 A few months earlier, Carrie's mom, an alcoholic, had managed to convince workers at family services that she'd beaten her drinking habit for good and was ready for Carrie to come home. So in December 2001, Carrie left Elon Homes for Children. The arrangement lasted a month, until Carrie's stepfather flew into a drunken rage, threatened the girl with a gun and hit her. Carrie pressed charges.

"We went to court and they said he had to leave," said Carrie, who was 15 at the time. "My mama chose to make me leave instead."

Sometimes friends' parents would feed Carrie and let her stay with them. Other times that just didn't work out. When she had nowhere else to go, Carrie slept outside.

Things went on this way for five months, until the day in May when Tracy Howard spotted Carrie waiting at the bus stop on North Tryon Street near Old Concord Road.

The girl he saw was white, petite and caught somewhere between childhood cute and full-blown pretty. She had the doll face of a Gerber baby nearly grown up, the kind of lips lipstick was made for and a grin and giggle that still spreads quickly across a roomful of people. Had she grown up in another family and made it past the ninth grade, Carrie would have blended in with any high school cheerleading squad in the county.

But most of her life had been a nightmare, and it was about to get worse. Carrie fit a profile that 20-year-old Tracy Howard had studied the way his peers in college studied for their final exams. He was methodical about it.

Carrie would be a bonanza. But first, Howard would have to break her down and turn her out. He'd studied how to do that, too, and he was good at it. With Carrie, it took him less than a week.

After more than two years of watching the way Howard operated, Charlotte-Mecklenburg Police Detective Scott Maxfield says he still doesn't understand the hold that Howard, now 24, had on these women. Even the women struggle to put it into words.

"I had nowhere to go and he was going to take care of me," said Carrie. "He'd say, 'I care about you and I love you,' and I believed that. I was young. I thought I loved him. I know that sounds silly now."

At Howard's trial in April, prosecutor Karen Marston repeatedly held up a worn florescent pink and silver paperback book found among Howard's property by investigators. The novel was Pimp, written by Iceberg Slim, the street name used by Robert Maupin, who spent 25 years prostituting women in the 1940s and '50s in Chicago. Though it was written as an autobiography aimed at turning young men away from the destructive path Slim chose, it has come to be used instead as the underground bible for those who want to master "the game."

Howard's game got him convicted of 21 counts, including conspiracy to coerce juveniles into prostitution and to distribute more than 50 grams of crack cocaine. The charges carry a minimum of 10 years in prison, but those close to the case think Howard will end up serving several decades behind bars after he is sentenced this summer.

Pop-culture experts say Howard's "game" is based on pulp writer Iceberg Slim's '60s- and '70s-era poems and novels, which depicted the pimp game as far back as the 1940s. Slim's work became the basis for some early West Coast rap and permeated all of hip-hop culture after the mainstream arrival of gangsta rap in the 1990s. Slim's slang, the very same street lingo he used in his 1969 fictionalized autobiography, Pimp: The Story of My Life, is now regularly used by hard-core rappers and wanna-be pimps like Tracy Howard. On the stand during Howard's trial, even the girls who worked for Howard used the slang Slim made famous.

According to court documents, Howard started reading books on pimping while he was incarcerated in 2001, and quizzed older pimps about the game during his various stints in jail. His brother Alex had flirted with pimping before, mostly using hardened drug addicts, but Tracy Howard was clearly determined to master it and go after slightly higher-caliber girls, much younger girls -- girls like Carrie.