The Newly Split Personality of littleSpoon

For a whole eight weeks, Myers Park residents and folks from all around the city had to go without their beloved littleSpoon, but the hip-hop brunch spot has returned, and it brought a friend.

In January, the restaurant's' owner Alesha Stegemeyer closed littleSpoon for renovations and transformed it into a two-in-one restaurant. Comida, an upscale Mexican restaurant, hadn't been doing as well in Plaza Midwood, where it had taken over the iconic Penguin building.

Plaza Midwood residents were apparently not feeling the Comida vibes, and since many littleSpoon fans were making the trip across town to support the restaurant, Stegemeyer figured she would bring it to them.

From 8 a.m. to 3 p.m., the space is still the cozy-but-modern brunch spot that regulars love. People hang out, drinking coffee from handleless mugs and eating the creations of chef Ryan Allen while listening to '90s hip-hop artists like NWA, Biggie and Tupac.

But when the sun sets, the area transforms into Comida. Lights dim, tables are dressed up and the music switches to Brazilian. The littleSpoon fans who never did make the trek to Plaza Midwood are now tasting Comida for the first time, after years of urging Stegmeyer to start serving dinner in that space.

The renovations included a new bar, which serves mimosas and Bloody Marys by day and "the best margaritas in town" by night. Like their food, the drinks are all housemade. 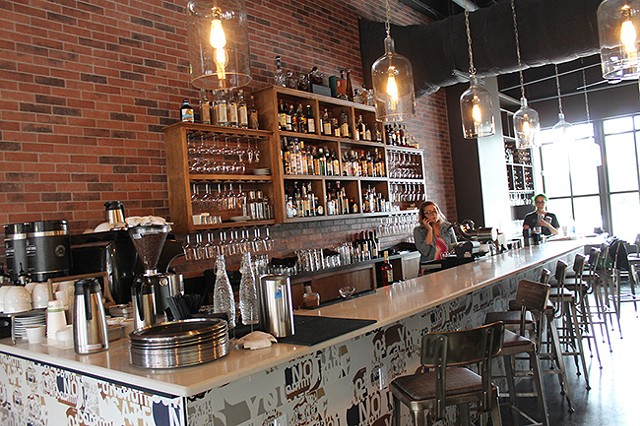 "If we can't squeeze it, then we don't pour it," Stegemeyer said. "You won't find a soda bar behind our bar. You won't find store bought orange juice. Everything is squeezed fresh."

They also made changes to the kitchen and dining room. The transition was simple and beneficial for the staff, especially to each restaurant's chef, who now work off each other for inspiration, Stegemeyer said. It's also a win for her, as she now only manages one space, just a bike ride from her house.

The temporary closing didn't mean the crew was off duty, however. Stegemeyer organized for her staff to travel the country and learn from different restaurants and bars, so they could bring the knowledge back and improve the restaurants.

"I think that experiencing great dining and food is the best way to be inspired," Stegemeyer said.

She spent 48 hours in Los Angeles taking Allen to specific restaurants she wanted him to experience.

"The style on the West Coast is very different than what's happening on the East Coast," she said. "I wanted him to be influenced by the changes in the movement that were happening there."

The staff takes occasional local field trips as well. On one upcoming day, the staff will work on the farms that they source their ingredients from.

"It's important to see where it comes from to appreciate and value the hard work and the man-hours that make up each individual either head of lettuce or the hydroponically grown tomatoes," she said.

Both littleSpoon and Comida try their best to support local farms and artisans. Sometimes the farmers grow unfamiliar foods, which Allen researches and experiments with.

"It helps you grow as a chef and it helps him grow as a farmer as well," he said.

You can find Allen in the kitchen, proudly sporting his Wu-Tang Clan hat. It's only his second hat in eight years. Stegemeyer gifted him a new one for his 30th birthday to replace the tattered one he'd worn since 2008.

Hip-hop is a passion Allen and Stegemeyer share. She grew up listening to artists like A Tribe Called Quest, Jurassic 5 and Digable Planets in school and still listens to it every day in her restaurant. Although you wouldn't expect it from a chic brunch spot, the music fits surprisingly well. However, there was initially some push back when she opened the restaurant.

Myers Park is the last place you'd expect to walk into a nice little brunch spot and hear a tune from Nas' Illmatic.

Stegemeyer was 15 when she first started working in the restaurant business. Before launching littleSpoon, she worked in television as a set decorator, food stylist and culinary producer, but after 10 years she wanted something new. Just in time, she met her husband and they dated long distance from California until she moved to Charlotte so they could be together. At the time, she was experimenting with recipes for a pie shop, but eventually the plans developed into what littleSpoon is today.

"We just wanted to build restaurants where we wanted to hang out," she said. "Charlotte is a really young, growing city. I'm from a larger market so I had different expectations of what I wanted breakfast to be and look like."

Some of their most popular dishes are the livermush, chicken biscuits and thick slabs of house-cured bacon. But the menu changes quarterly, as foods go in and out of season. For the reopening, they added crispy rice, breakfast tacos and avocado toast (adding Comida to the space has given Allen more ingredients to work with, like avocados).

Stegemeyer describes the chewy chips the restaurant serves as "crack." They're partially fried, making them crispy on the outside and chewy in the middle. They also serve tacos, tamales and different meats like duck and pork.

Comida opened two years ago in the old Penguin building, when littleSpoon was two years old. Stegemeyer said she missed Southern California Mexican food, where the cuisine is broken into regions and much different from the Tex-Mex that Charlotte is accustomed to.

"It was the one cuisine — I've been here five years now — where I just missed it," she said. "The restaurants that are here are great and they're wonderful but it wasn't hitting that spot for me."

At both restaurants, diners are encouraged to order a few different items to get a real taste of the flavorful, bright and ingredient-detailed menus. With every bite, you taste the hard work of a farmer, creativity of a chef and Los Angeles vibes of the owner. And if you enjoy the brunch, you can always come back for dinner. After all, it's a whole new restaurant.