When Green's Lunch first opened its doors, Calvin Coolidge was the president. Prohibition was in full effect. And women had won the right to vote less than a decade earlier.

Dating back to 1926, Green's Lunch is Charlotte's oldest restaurant. A lot has changed in the past 92 years, but this hot dog joint has stayed pretty much the same, besides a few different owners who all have brought their own tastes to the restaurant over the decades.

Philip Katopodis brought the slaw. An owner of multiple restaurants across town, he bought Green's Lunch in 1975. Originally, he wanted the land, buthe soon learned that keeping the restaurant might be worth his while.

"He realized that it was a little gold mine," said his daughter and current owner Joanna Sikiotis.

For her part, Joanna Sikiotis brought the french fries. With all the northerners moving to town, she also brought the sauerkraut and relish. She grew up in her father's restaurants and has been working at Green's since she was 10, which made it an easy decision to buy the restaurant from her father in 1989.

Today, the go-to meal at Green's Lunch is the all-the-way hot dog: Robert's mustard, ketchup and onion, with Mary's chili and Katopodis' slaw, served on a styrofoam plate with a side of Sikiotis' crinkle-cut fries. 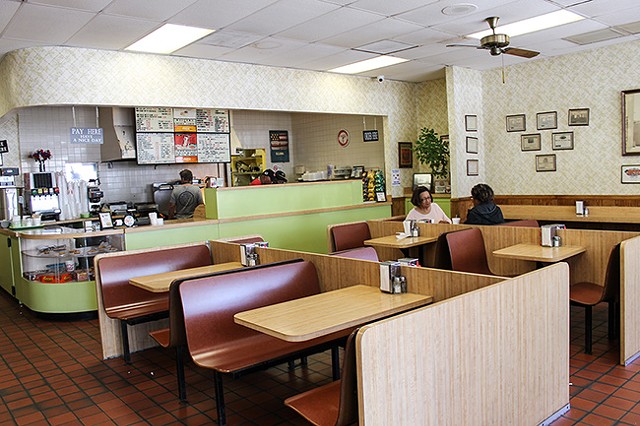 Customers order at the register and pick up almost immediately at the other end of the counter. They take a seat at an unflattering booth surrounded by outdated wallpaper, but that's just part of the charm. The walls are covered in awards, newspaper clippings and black-and-white photographs. A framed photo of a little boy ready to scarf down a hot dog hangs on the wall. In the photo, Sikiotis' son Nick is just a boy, but now he's the 27-year-old behind the counter.

If you look at the photo closely, you'll notice the personified hot dog toy that inspired the restaurant's logo on Nick's tray. The hot dog man is featured in a large, eye-catching mural on the side of the building. The colorful art is designed to catch the eye of potential customers, since the front sign on the building is so faded that it's barely readable.

"The business got to be so much that that little place didn't work anymore," Sikiotis said.

Water would flood the building every time it rained, making everyone's feet wet and cold. In a large framed photo on the wall you can see why: The doors were lower than the sidewalk.

The renovations did receive some backlash from the regulars. One man told Joanna's mother that the new building would "ruin the atmosphere."

"My mother was so mad that she said, 'Well, if you miss this atmosphere, I promise you in the new building every time you want your feet wet, I will take the water hose and wet your feet,'" Sikiotis said.

For most folks, however, the new building was a symbol of progression.

In the original building, Sikiotis' mother noticed one of their regulars, an African-American man named Mr. Brown, always passed the first door and went to the second. One day she asked him about it and he said he was used to going through that one.

In 1926, racial segregation was prevalent, but Robert would allow African Americans to go through a separate door, stand in the corner and wait for the white people to be served. Then he'd give them food that they could take to-go.

"My mom felt so bad," Sikiotis said. "She goes, 'Well Mr. Brown, now we're going to have one door and everybody's the same.'"

Eight white bricks from the old building are a part of the wall today. 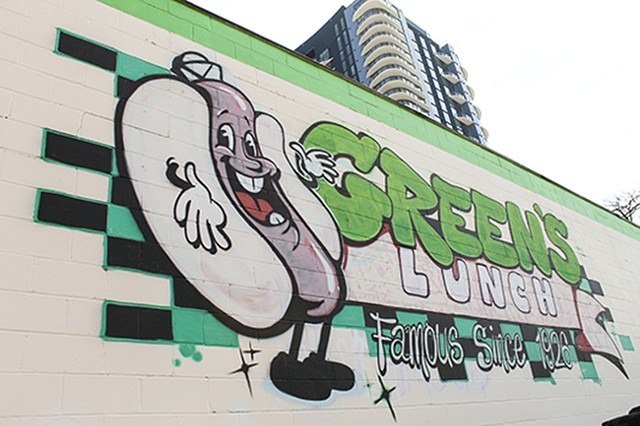 Some families have their own history at the restaurant that goes back generations. One regular that stands out in Sikiotis' mind is a woman whose mother brought her there as a baby.

"[The mother] just gave birth and she made her husband come over here and get hot dogs," Sikiotis said. "After she got out of the hospital, she came and got hot dogs with this baby. Now this little girl is 24 years old and she's in college and when she comes back from college, she comes and eats hot dogs."

While staff treats all their regulars like celebrities, memorizing their names and orders, they've also got their fair share of customers who truly are famous. Billy Graham, Anthony Hamilton and Cam Newton have ordered at the counter.

Green's Lunch, which used to never open on Sunday, started opening for Panthers home games after the team was established. Sometimes an opposing team's player will walk in and get ridicules from the crowd of blue.

Sikiotis believes the best way to celebrate their milestones is to give back to the community that supports them. "Without them, we wouldn't have been here 92 years," she said.

Partnering with local sports teams is one way to do that.

Two years ago, as the restaurant celebrated its 90th anniversary, the crew raffled off items donated by the Panthers, Hornets and Knights to raise money for The Make-A-Wish Foundation. They fundraised throughout the year with a hot dog eating contest and by selling $1 stars to customers. In the end, they were able to grant wishes for two local children. They also collected toys around Christmas for Levine Children's Hospital.

Sikiotis' gravitates to charities like Make-A-Wish and Levine Children's Hospital. She lost a four-year-old sister to leukemia.

"There's a deep thing in my heart for children, especially children that are sick," she said. "Because of Make-A-Wish, I feel like I'm giving, in her memory, some other child his wish."

Sikiotis and staff fundraise every five years and plan to do so again at the restaurant's 95th anniversary. Her goal is to organize a 5k this time, and plans to go even bigger for the centennial.

In a time of "the big guys trying to get rid of the little ones," as Sikiotis described it, she doesn't have plans to sell the restaurant anytime soon. She's gotten some offers, but what she really wants is for her son to continue the legacy.