The Nick Mackey you don't know 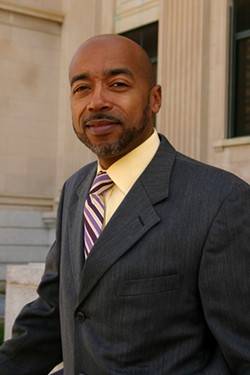 December 2007 is a month Nick Mackey will never forget; it's the month he became the sheriff, at least on paper, of Mecklenburg County. But he never took the office, and a firestorm of controversy swirled around him. Questions were raised about his education, his finances and his background with the Charlotte Mecklenburg Police Department, where he worked for more than a decade.

Everyone had a lot to say about Mackey, but he didn't say much -- especially to the media. The events that later unfolded blindsided a man who says he's always wanted to stand out in law enforcement and eventually head an agency.

"I went into law enforcement right out of college," says Mackey, 40, who runs his own law firm, Mackey and Associates. "I was 22 years old when I joined the Charlotte Police Department, which became the Charlotte-Mecklenburg Police Department. My undergraduate degree is criminal justice. I have a master's degree in criminal justice. I worked for 14 years as a police officer and a police sergeant. I teach criminal justice at the graduate level. I have a master's in public administration. That was my career path. I've always aspired to be an agency head."

When Mackey decided to run for sheriff, he says that he didn't expect the drubbing that he received in the media.

"I never imagined that any of that stuff would be relevant. Whether or not I'm married or if I have children; I just don't see where that is relevant. My wife's name? I mean, what's the purpose of that? I think the purpose was to say, 'Well, I asked him this, and he didn't tell me.'" Mackey contends that he doesn't know the name of any elected official's wife -- save for first lady Laura Bush.

He even claims to be in the dark about the spouses of well-known senators like John McCain. "I don't care what her name is," he says. "I never thought some of the things [the media] was talking about would be an issue. It was surprising."

It was surprising to some in the Democratic Party that Mackey defeated Sheriff Chipp Bailey last year on Dec. 6 in a vote where he earned 631 votes to Bailey's 390.

In a matter of days, however, the election process was questioned. Members of the local Democratic Party went to the state party alleging that Mackey broke the rules. It all started the day after Mackey was declared the first black sheriff in Mecklenburg County's history. Activist Jane Whitley filed a grievance with the state party, and all hell broke lose.

The county commissioners wouldn't confirm Mackey, and eventually, the December election was thrown out.

"Well, I'm not very thin-skinned," says Mackey. "I chalked it up as to this is just politics, this is just sour grapes, this is bias. This is what people do when the person they are supporting is not you. If they don't support you then they try to pull you down."

Another reason he kept quiet is because he made a promise to some elected officials who asked him to stay above the fray and not get caught up in the mudslinging.

"In politics, especially the negative campaigning, the rule of thumb is say whatever you want to say -- it doesn't have to be true -- and people will believe it," he says. "That's why I told people, 'If you want to know something about me, ask the people who know me or ask me. Don't just listen to what the media says. They're going to have their own agenda.'"

When Mackey heard reports saying that he wasn't qualified to be sheriff, he says he couldn't help but think: "Who's more qualified?"

"That also makes certain people angry," he says. "That you can have someone like me who has all of these credentials when they don't have them themselves."

And even though most of Mackey's opposition came from members of his own party, he still claims to be a loyal Democrat and even worked to help reorganize the districts following the election fallout.

"If it had not been for me and my effort in attempting to get the sheriff's appointment and educating people all around the county on the precinct politics, this party would not have the involvement and activity from the citizens that it has today.