They're a (funky) American band 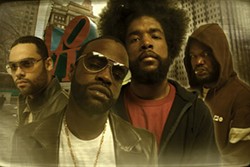 "What kind of music do they play?" a Def Jam receptionist innocently asked, when queried about the Roots. Although self-classified as a rap group, the Roots' sound has always gone beyond that because it's actually a band of accomplished musicians who mix R&B, soul and pop. Ironically, Philly's current flagship act is ambivalent about being sampled, but it's not above using samples with its music. It's no wonder that even someone from the Roots' label is confused.

Describing the groups's upcoming late summer disc, Game Theory, in a recent Billboard article, Roots drummer Ahmir "?uestlove" Thompson explained that it's "very mature, very serious, very dark." According to the band's own album guide, Game Theory will also be an impressive mix of styles filled with lots of funky punctuation -- and emblematic of the state of the progressive soul scene that the Roots fosters in the City of Brotherly Love.

After meeting at a local art school in the mid/late '80s, Thompson and MC Tariq Trotter quickly bonded. Thompson played drums while Trotter penned rhymes, transforming themselves into ?uestlove (aka Questlove) and Black Thought. Along with bassist Leon "Hub" Hubbard, rapper Malik B and, later, keysman Scott Storch, these friends became the Roots circa 1989, playing school gigs to start out. Unlike hip-hop pioneers Stetsasonic, the group didn't just have a backing band -- the Roots was the band.

Though Philadelphia previously had breakout rap stars, Schooly D's pre-gangsta bad boy persona soon wore thin and "Fresh Prince" Will Smith became a TV/movie star and put his music on the back burner. Also, the local scene sported a built-in inferiority complex, as Philly is so close to rap's New York birthplace.

Luckily, that didn't discourage Thompson or Trotter. Like any band, the Roots hit the clubs to build a reputation, leading up to the 1993 debut Organix. Think of it as the Roots' version of Nirvana's Bleach -- a raw blueprint for greater things to come. Critical momentum led the group to a major label release, 1995's sample-less Do You Want More?!!!??!, proving that, just like Thompson's stage name, this crew loved punctuation and knew how to use it. More showed off the group's jazz chops, featuring appearances by singer Cassandra Wilson and alto saxophonist Steve Coleman. As Gang Starr and A Tribe Called Quest were demonstrating around the same time, this was a style match whose time had come.

The Roots' next album, Illadelph Halflife (1996), showcased a more musically straightforward sound that was also more confident lyrically and attitude-wise. There were also personnel changes, with Kamal Gray on keys and vocal-beatboxers Scratch and Rahzel joining around this time. Though Illadelph and its single, the sweet, smooth "What They Do," made the Top 40 chart (helped also by its sterling video), an even bigger step forward was to come.

By the time of 1999's Things Fall Apart, the band showed that it was ready to take things to another level. Named after Chinua Achebe's landmark novel, which unsentimentally chronicled a pre- and post-colonial African world, the Roots was similarly striving for a socially conscious statement. While a smooth jazz element still infused the group's work, R&B and soul now became more prevalent. Rap luminaries like Erykah Badu and Mos Def guested on TFA, helping transform the band into a focal point for a scene that harbored an up-and-coming generation of nongangsta rappers who aspired to more than underground status.

In the disc's liner notes, the group expresses frustration not just with rap but also its audience, insisting that both the music and the listeners need to evolve and mature. While that's a heady demand for an album to make, the payoff was that TFA became the Roots' most high-profile and best-selling album up to that point, reaching number four on the charts. Of course, the CD's inclusion of the Grammy-winning hit "You Got Me" didn't hurt.

Not only was the band spacing out time between albums rather than cranking out yearly product, it was also taking control over its career by conceiving Okayplayer as an umbrella organization for creating, producing and releasing music.

Musically, the Roots was hardly complacent, and it was ready to take another giant leap with its next album, 2002's Phrenology. This was not only the Roots' most diverse album thus far, but also its most distinct statement of purpose. The cover images included a minstrel, Klansman, junkie and DJ along with Rosa Parks, Elvis and Malcolm X. Alongside a hardcore punk track ("!!!!!!!" -- note the great punctuation display again), an extended found-sound collage, and guest appearances from avant-jazz guitar god James "Blood" Ulmer and radical poet Amiri Baraka, ?uestlove & Co. crafted their most catchy R&B-pop masterpiece "The Seed (2.0)" with Cody ChesnuTT's help. With the possible exception of De La Soul in its prime, few rap acts had ever dared release such an ambitious record with such startling payoffs.

The band was also changing its sound, through the addition of percussionist Frankie Knuckles and guitarist "Captain" Kirk Douglass. (Malik B. was MIA for unclear reasons, and Scratch and Rahzel would soon go solo). In addition, ?uestlove built up an impressive reputation as a producer (D'Angelo, Common, Dave Chapelle's 2004 Block Party extravaganza) and session man (Jay-Z, Blackalicious etc.) -- not to mention a reputation as a cultural/style icon, with his huge afro adorned by a hair pick.

Again taking time until the vibe was just right for a new album, 2004's Tipping Point followed Phrenology. While not wholly as ambitious, Tipping Point was another satisfying piece of music from a tirelessly creative band. This album's name also derived from a book title, tellingly a sociological study about breaking into mainstream culture. As previous Roots recordings had, the album developed out of jam sessions that were edited down into raw essence. End result: another Top 10 album.

But the band was prepping for yet another change. There were complaints that Tipping Point was partially the result of previous label Geffen pushing the band to make a more commercial record, and that the group wanted to find a new home. Last fall, just after releasing the 2-CD Home Grown compilation, the Roots signed with Def Jam Records, a wise choice considering the label's rap heritage.

If ?uestlove's Billboard comments are accurate, expect the band's Charlotte show at Amos' Southend to limn just how the Roots' complex next stage will keep 'em in the game.