The Secret Chocolatier is not so secret anymore

Meet the family of chocolate 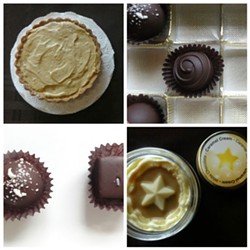 Five years ago, a coffee shop in Rock Hill, S.C., was selling handmade truffles to its customers from an unknown source. The menu noted that the truffles came from a "secret chocolatier" but offered no other information.

Bill Dietz was still working in downtown Charlotte with the Sonoma Group when Lell Trogdon commissioned him to make chocolates. It was a side job, one he wasn't yet comfortable marketing. Now, however, Dietz has come out of his chocolate closet.

His family's Secret Chocolatier is an inventive artisan chocolate shop at the corner of Providence and Sharon Amity roads. Lured by several fervent recommendations from fellow locavores, I decided to check it out and discovered the business is as much a family compound as it is a chocolate shop.

Walking into the place felt like walking into the home of an old friend. No formal welcome, just an acknowledgement of my entrance into the daily buzz of activity already in progress. Dietz's wife, Karen, smiles hello as she finishes with a customer. Their daughter, Robin Ciordia, is busy helping her father unpack from a trip to the Yorkmont Farmers Market, while Andy Ciordia, Robin's husband, puts the finishing touches to a batch of his signature toffee. I am greeted from the ground by a gummy smile from Logan, the "littlest chocolatier," who is on all fours and making his way around the chocolate case. It's business as usual, Robin tells me, and has been for the last four years. That's when the family got serious about chocolate.

Bill and Karen Dietz had moved to Charlotte from their home in Myrtle Beach, S.C., in 2005. Three years later, the family business was born. "We thought we were retiring," says Karen, who is now front and center at the shop most days.

The Secret Chocolatier began at area farmers markets, where the Dietzes and Ciordias would haul their handmade truffles. There, the family developed a loyal following for their "evil good" treats. With prodding from said followers, the family put down roots a year ago in their Providence Road storefront.

Bill Dietz is a self-taught pastry chef with more than three decades of experience. He spearheaded the chocolate-making process in the beginning, while Andy and Robin took care of business operations. Eventually, the whole family got in on creating the stuff.

Then there are the truffles, many of which are made with locally sourced ingredients.

"We aim for local first," says Robin, who is intent on giving back to the area that embraced the family's business from the beginning. "I think it's important to support your neighbors, particularly in this economy," she says.

The Secret Chocolatier sources fresh herbs and seasonal fruit from local farmers and gets a few of its ingredients straight from backyard gardens. Locally sourced favorites include the basil truffle, the lavender truffle, the spearmint truffle and Tres Incendios, a truffle made with local ancho and serrano peppers and guajillo chiles.

The success of the Secret Chocolatier is its mission to keep everything fresh. Each member of the family is encouraged to contribute to the brainstorming, and no idea is too far-fetched. The business even takes requests from its customers — that's how the cardamom truffle came to be.

The vibe in the store is warm, fueled by smiles and laughter, much of it induced by baby Logan. He's growing up in the chocolate shop, just like his grandfather grew up in the pastry shop his grandparents ran.

And so it continues, a sweet legacy made of chocolate and other heavenly delights.