The Shape Of Things 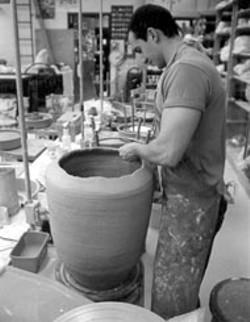 "The artist is the creator. It is the artist's responsibility to know what to create and what to destroy."

With this simple but forceful statement, Ahmad Sabha, whose ceramic vessels are part of the Post-Industrial Romanticism show at gallery W.D.O., acknowledges the power -- some may consider it godlike -- an artist wields. But it also implies a lot of responsibility for setting high standards and committing to those standards. "You ask yourself, is this something you want to be associated with?," reflects Sabha. "When the aliens land in 500 years and discover this thing you've made, will you be proud that it can be identified as your handiwork, or representative of your world? If no, then throw it away. If I make something I don't like or it gets damaged, I put it outside in my front yard, my pottery graveyard."

Which is to say that it's OK if things don't always turn out the way you expect.

"One reason I like clay is because it's part of the life cycle. It starts wet, moist. Then I shape it into a bowl that contains something -- water, maybe, or simply volume. I let it harden so that it firms up, put it into a kiln where fire touches it and it becomes harder. Time passes on, it ages, becomes broken. It gets thrown away and goes back to earth from where it came. This is good, because if you don't know where your beginning is, you won't have an end."

You wouldn't expect such profundities from a young man, but Sabha's packed a lot into his 28 years. He was born in Kuwait of Lebanese and Palestinian parents. His late father, a petroleum engineer, worked throughout the Middle East until conflicts there brought Sabha, his mother, brother and sisters to America in 1992. They will soon become citizens.

He first took art classes in high school here, and then at CPCC while earning a degree in chemistry. After graduating with a B.S. in civil engineering and philosophy from UNC-Charlotte, Sabha began potting in earnest. Although he acknowledges the connections between science and art -- pots, he agrees, are engineered to stand erect and not leak - he's really driven by the beliefs that give meaning to everything he does.

"I was raised a Sunni," he explains, "but I am now a Sufi. Sufiism is about finding the essence of things, of the self, and of life. For instance, I've been making pottery seriously for about five years, and I go through different phases. At one time, my pottery had faces and wings on it. But these last pieces are about purification and salvation. As we go through the cycle, we contaminate; it's a natural part of nature. But purification is possible. And it's not just literal contamination. We drink water from a dirty river and thus contaminate our bodies, and then somehow filter it clean, but the contamination here, in our hearts, does not come from any river. And by salvation I mean that these vessels, traditionally, hold things that save us from famine, like water or bread, the essentials of life."

With Sabha, conceptualization comes before sitting down to make a pot. "I have to create a concept first. If I create a vessel, for instance, will it be lidded or open? Will it say something obvious or will it be abstract, letting the viewer decide what it says? If it is a vessel, how much space will it occupy? What will it contain, and what will the aesthetic be on the outside?"

As inspiration, Sabha takes his camera all over the country, photographing the water towers and grain silos that typify the waning industrial era in America.

"This industrial theme is natural for me. In America, we're in a post-industrial age, but Kuwait is very industrial. The shapes that I photograph here, that I use for my containers, Kuwait is full of them. For that reason, I'm also interested in cement as a creative medium. I've put the clay pieces in the show on cement bases for contrast."

He then makes sketches from the photographs, making a lot of decisions and solving potential problems, so that when he finally sits down at the wheel he has a concrete idea of the result he wants. "That's how I work. Other people have different processes."

Besides knowing which of his products belong in the graveyard, Sabha also knows what else to let go of, like the frustration that comes with achieving perfection.

"The artist is the shaper," he says, "but clay doesn't respond the way you think it will. And sometimes, you can't center. So you step away. You drink some tea, take a walk. You also have to step away from your critical voice, your ego. An artist must get rid of the self, which can be done through meditation and contemplation."

While he is a devoted practitioner of meditation, he makes sure to balance the solitude required of artist with plenty of peer contact. "I love working at CPCC. There are people all around me, printmakers, jewelers, all ages, from all parts. Being in that river of energy is refreshing. They tell me it's time for me to move into my own studio, but it's isolating, like moving into a monastery. I don't want to leave academia.

"It's like that at Penland. You go there for two weeks in the summer, to an intimate environment where you make lifelong friends from all over the world. You work, sleep, eat, party with them. At six in the morning, before breakfast, you sit on a bench with someone you don't know and talk and get to know them."

At Penland, Sabha worked with fellow ceramicists Karen Karnes, "the grandmother of American ceramics," and Robert Archambeau, "the national treasure of Canada."

"They are coaches and mentors. Archambeau told me it's OK to just do what I have to do, that it's not going to hurt anybody."

When not taking on freelance engineering projects, Sabha works part-time at W.D.O. He credits gallery owner Rob Williams with pushing him to be comfortable "on the other side of the fence -- to execute a higher level of awareness into my work. Be more abstract, in other words. I learned there's nothing wrong with doing what other people don't get. Maybe they'll look at my work and, for one second, have some awareness -- maybe two seconds. And that's OK -- I'm not here to judge."

The exhibit Post-Industrial Romanticism: Clay/Glass/Metal will be on display through March 13 at gallery W.D.O., Hearst Plaza, Suite 1, 214 N. Tryon Street. Renowned post-industrialists Dan Anderson, Hoss Haley and John Goodheart are among those who will also be represented in the show. Gallery hours are 10am-6pm Tuesday-Saturday. For more info, call 704-333-9123.