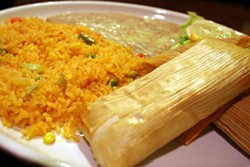 "Will that be the 16-ounce Margarita, the jumbo size?" our server asked. Hmm. This sounded promising until we figured that two 16-ounce jumbos at $7 each was the same price as getting the 60-ounce Margarita pitcher for $14. That explains why everyone has pitchers of margaritas on their tables and why the owners named this place Las Margaritas Mexican Restaurant

In late August 2004, co-owners and brothers Jose and Polo Serrano opened Las Margaritas in one of those unlucky spaces along Independence Boulevard, near Sharon Amity, where the road-widening project never seems to end. The spot had been a Mexican restaurant (El Valle), and the same neighborhood also has Odalis, a well established popular Mexican bakery. The Serranos' wives (and sisters), Jennet and Irma, manage the front of the house.

The family hoped to capture both American and native Mexican customers by gutting and opening up the interior. Jennet Serrano (wife of Jose) said the brothers wanted the main dining room to have a "clean and uncluttered" feel. To accomplish this, the place was refurnished with generous seating. The walls, not fettered with travelogue knickknacks, shine sun-god yellow, while the adobe-styled bar area is sequestered near the back center. Large group tables line the middle space while booths edge the room. Unfortunately, the erect booths do not have a relaxed recline. More comfortable are the hand-hewn, vibrant blue chairs.

The Serranos have spent enough time in Charlotte to know their market. In the '90s the brothers left a restaurant in Oregon for Charlotte. In 1996 they became cooks in Azteca's kitchen. The Serranos learned their craft the old-fashioned way: working their way up the kitchen line from dishwashers to cooks.

Spanglish thrives at Las Margaritas. Most of the efficient servers understand the menu's English, but not much more. Pointing is effective, and bilingual Jennet Serrano helps untangle any linguistic jams.

The menu of 50-plus entrées, which range from $8 to $11.25, may require a whole margarita pitcher to digest. With the menu arrives a basket of warm, thick, yellow corn chips served with the classic dipping choices of spunky salsa and chunky pico de gallo. Then you're handed a second menu. Las Margaritas has what Jennet Serrano calls "the picture menu." It offers traditional dishes from Jalisco, the Serranos' native coastal state located on the west side of Mexico. Guadalajara is the state's capital. The second menu also offers large platters for crowds. "Mexicans like to eat a lot of food," Jennet Serrano noted.

Then Mexicans must love Las Margaritas. Indeed, on one busy Friday night only about half the tables seemed to be non-Latinos. Entrées were presented on oversized white platters. Since Mexican foods are more often horizonal than vertical, the quantity seems to be even more than it is -- kind of a trompe l'oeil of the food world. The depth of the sides -- rice and refried beans -- is very thin.

When the sauce is ladled on the adjoining entrée, the plate melds together in a continuum. This is much of the appeal and dislike of Mexican food: the ooze factor. True, not all Mexican food oozes -- fajitas don't, and neither do grilled plates such as quail or steak. But Mexican cuisine, just as Italian cuisine, suffers from familiarity. Not all Italian is red and white, and not all Mexican seeps.

In the kitchen, the Serrano brothers pay attention to detail. An earthy tamale steamed in a corn husk reveals Mexico's heritage: pork from the Spaniards, corn from the Aztecs and cooking technique from an ancient indigenous people. The Mexican tamale is one of the world's great foods, and the tamale at Las Margaritas is perfection.

Even more of a delight is the chicken mole. A traditional Pueblan mole, as served here, is as complex as Indian curry, with 20-odd ingredients including a variety of chilies, such as mulato, ancho and chipotle; almonds, peanuts, cinnamon, cloves, anise seed, onion, garlic and, of course, Mexican dark chocolate. Into this lush, dense, smoldering sauce are dozens of tender chicken breast morsels. The mole shares the plate with strangely tasteless refried beans, a delightfully crunchy slaw, and aromatic Spanish rice with flecks of carrots, peas and corn. Not as exciting were the enchiladas de camaron, two large flour tortillas stuffed with extremely small shrimp and Mexican white cheese and then doused with a lugubrious white tomatillo sauce.

If you skipped the margaritas, which come in lime and other flavors, the drink list includes a dozen or so tequilas, beer and a few wines.

Desserts are chock-full and overdone. The Mexican apple pie is a sweet tortilla wrapped enchilada-style around chunks of apple pie filling then doused with piped whipped cream, topped with maraschino cherries and accompanied by two side guards -- scoops of vanilla and chocolate ice cream. The inert flan tasted heavy with more condensed milk than eggs.

What shines brightest and is at the heart of Las Margaritas is how the Serrano family treats each customer like family. There may be more spectacular-looking Mexican restaurants in town, but none as welcoming.

Have a restaurant tip, compliment, complaint? Do you know of a restaurant that has opened, closed, or should be reviewed? Does your restaurant or shop have news, menu changes, new additions to staff or building, upcoming cuisine or wine events? Note: We need notice of events at least 12 days in advance. Fax information to Eaters' Digest: 704-944-3605, or leave voice mail: 704-522-8334, ext. 136. To contact Tricia via e-mail: tricia.childress@creativeloafing.com.

Hours: Sunday through Thursday 11am to 10:30pm; Friday and Saturday until 11pm. Same menu all day.