A movement under the Oaks

Late on a humid Sunday afternoon, July 30, at Twin Oaks apartments on East 36th Street, about a dozen residents mingle under a large oak tree. Some sit on stoops, others pace. Some sit quietly, others discuss the conundrum they've found themselves in through no fault of their own.

"I just don't know what I'm supposed to do," one woman stammers between sobs.

The residents are young, old and in between. Some have lived here for nearly a decade, some moved in this year. One thing all of the neighbors share in common: they don't know where they'll be living on September 17.

Each resident living in the 18 remaining units in the complex — two other units were heavily damaged by fire in February — received a letter on July 13 stating the company they were leasing from, Beatty Investment Homes LLC (BIH), had sold the property and would be knocking it down. Local development firm The Drakeford Company (TDC) and builders Shea Homes plan to build more than 30 townhomes on the 1.4-acre plot where Twin Oaks now sits. Although TDC's intentions were first reported in April 2016, residents say that BIH never communicated to them that they would have to move, and most were blindsided by the letter, which originally gave them just 30 days to be out of their homes.

Many Twin Oaks residents are on subsidized rent and collect meager disability checks as their only income. With the Charlotte Housing Authority on a six-month waiting list for affordable housing, residents feared they'd be put out on the streets.

Since then, those residents have come together with the help of neighbors from surrounding homes in the NoDa area to demand better treatment, and the efforts have been working.

After an original group of Twin Oaks residents and neighbors first met under the large oak tree that stands in the center of the complex — some have taken to calling themselves the Oak Tree 30 — Shea Homes and TDC acquiesced to some of the groups' highest-priority demands, such as an extended move-out deadline and an increase in money to help residents relocate.

Molly Barker, who lives next to Twin Oaks in the Wesley Corner at NoDa complex, heard on the news that her neighbors were being forced out of their homes and decided to see what she could do. Barker didn't know anyone there, so she walked over and started knocking on doors.

"I've never been involved in this issue," says Barker. "I know nothing about gentrification, I know nothing at all. But I wave to these people and these are my neighbors, and there's something wrong if a group of people are being tossed out without adequate means."

On her first visit to Twin Oaks, she met Sharon Edwards and Caroline Cunningham. The two residents told Barker that the unsuspected eviction had them in a tough situation, but they knew others in the complex who were worse off than them. The two began introducing Barker to their fellow Twin Oaks residents. Eventually, three turned into 30, and the Twin Oaks Rehousing Project was born. 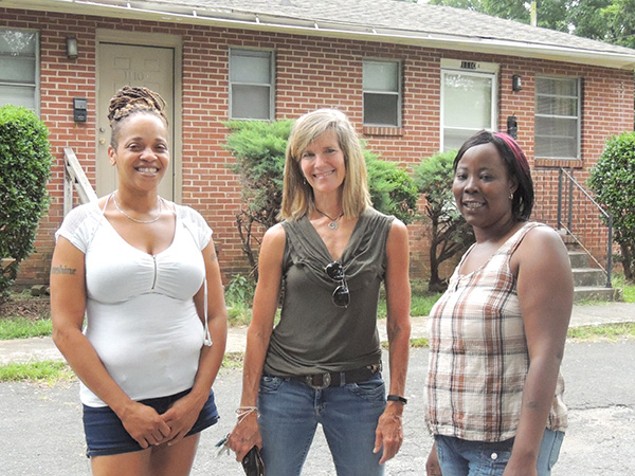 During their first meeting, the group discussed the priorities for residents.

"We talked about what we needed, and what we need is a community where people are treated with dignity," Barker says. "The specific needs were more money, more time and more respect."

Through Facebook, Barker contacted Shea Homes and was put in touch with Bobby Drakeford, head of TDC.

Within about a week of the first meeting, Drakeford informed them that the developers would extend the move-out deadline by a month, until September 17th, and that residents would receive $2,000 to help them relocate, four times the original offer of $500.

Since then, Barker and her friend Shannon Weatherly have been in the neighborhood almost daily, speaking with residents about what, exactly, they need.

Cunningham, known around the neighborhood as Sunshine, has lived in the NoDa area her entire life. She moved into Twin Oaks about 10 months ago, and planned to nurse her ill father there. Her father passed away just two weeks later, however, and Cunningham found herself living alone. Despite the loss, she felt as if she was finally striking out on her own for the first time in her 41 years.

Cunningham was heartbroken to learn that her apartment would be rubble in just a month's time. Nevertheless, she went to work trying to find a new place. She quickly learned that she wouldn't be able to afford an apartment elsewhere.

"Everywhere you go you have to make three times the amount of monthly rent to live there. It's not understandable," says Cunningham, an employee at Showmars Family Restaurant. "Why is that necessary when I know I make enough to pay the rent every month? I work just like everyone else. I get up and go to work. Whether you make more or not, work is work. If we go to work we should be able to get a place and live. It shouldn't be this hard."

Cunningham fears she will have to move away from the neighborhood she grew up in to find affordable housing, but says that even in her worst-case scenario, she has family she can stay with.

Others in Twin Oaks aren't so lucky.

Reginald Howard is 58 and has been living on disability since receiving a pacemaker last year. With no affordable housing available in the city, Howard seems resigned to the idea that he will be living in his car come September 18.

"I don't have nowhere," Howard says. "All this week I've been racking my brain, trying to go different places to try to find somewhere, and everything is booked up. They want you to have twice as much as your gross income a month, which is just impossible for me. My health is really bad. I called it success to be moving into this place last year, but now this has come up, and I have nowhere to go at this moment, I don't."

Barker remains optimistic that neither Howard nor any other Twin Oaks resident will be sleeping anywhere but in their new homes by the deadline.

After she and Edwards addressed Charlotte City Council at a recent meeting, Barker said she was frustrated by hearing from city leaders that their hands were tied. She has used the connections she built during her years running local nonprofit Girls on the Run to recruit realtors, social workers and a bevy of other Charlotteans to join the effort to get homes for the residents at Twin Oaks. She's been encouraged by the number of professionals who have stepped up and offered their personal time and professional expertise to help the Oak Tree 30.

"I'm excited most because there are genuine relationships developing here," Barker says, her eyes tearing up as she stands with Edwards and Cunningham. "This is not just about money, it's not about things, it's about connecting and building trust and dignity. I am looking forward to how that can re-engineer the system.

"The relationships that are happening here are outside of the system," she continues. "How can we build something new together? That includes the builders and economic people, and the people that live in these homes; it's all of us. It's liberating us all from the system that sees people as numbers."

There are hopes that the Oak Tree 30 could potentially turn into a larger network of people fighting for the rights of affordable housing tenants and victims of displacement throughout Charlotte, but Barker and Weatherly remain adamant that their only focus at this time is to help the Twin Oaks residents, whatever that takes.

"I'm not trying to figure out the housing problem in Charlotte right now, I'm trying to figure out what's going to happen with these 18 families, because that is why we showed up under this tree," Weatherly says. "It's really important that we keep our eye on this ball and help these families, and then hopefully we'll learn things and we'll be more educated by helping in this process. Then, come September 18, when they've all found homes, then maybe we'll talk policy and soccer fields and whatever people want to talk about. But right now we're talking about these people."

As for now, the Oak Tree 30 is still getting results.

At the July 30 gathering under the tree, Weatherly creates an impromptu GoFundMe account titled Twin Oaks Rehousing Project to help residents with deposit payments on new homes. She also announces that a 75-foot trailer will be placed in the parking lot of Missiongathering church on 15th Street to collect housing needs for Twin Oaks residents and their new homes.

At a meeting on July 31, Barker tells residents attending a meeting at NoDa Bodega that developers have agreed to pay up to $1,000 as a down payment directly to the owner of any new home a Twin Oaks resident is able to find, then pay the remaining $1,000 directly to the resident upon their leaving Twin Oaks. They had originally planned to only pay the $2,000 upon return of the apartment keys.

Still, the announcement doesn't sit well with some residents at the meeting, including Scott Stewart, a longtime maintenance man at Twin Oaks who lost his job and his home when BIH sold the buildings.

And so the process continues, as it does in so many similar situations happening throughout the city. The difference here is that Stewart has the Oak Tree 30 at his back, and that makes all the difference.