Where Have all the Ghettos Gone? 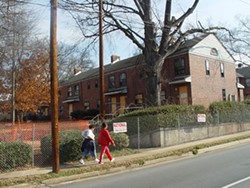 While no one was looking, the federal government stopped building slums. This is a good thing -- and a bad one, as city leaders across the country are beginning to find out. The Charlotte City Council last week learned that this city needs to build 12,530 new rental units by 2010 to accommodate even half the need for housing for the desperately poor. The council also learned that for the first time in decades, the city will have to shoulder this financial burden largely alone.

A study by Charles Lesser & Company found that Charlotte has a desperate need for housing for families making less than $16,000 a year, and in particular those who make less than $8,000 a year. The sticker price for this shocked the city council even more. It would cost about $800 million over 10 years, a figure that would likely climb to more than $1 billion if you figure in the interest on construction debt.

It's a problem that isn't unique to Charlotte.

For decades, the federal government warehoused the poor in public housing projects. Those projects went by the names of "slums," "ghettos" or just "projects." In Charlotte, like elsewhere, the projects were built on the least expensive, most undesirable land available at the time.

The slum-building boom picked up steam in the 1950s, when hundreds of billions of dollars were spent packing the poor into urban settings that were often cut off from the rest of the city. Clustering the poor together in an atmosphere in which people had difficulty escaping compounded the social problems that would quickly come to plague public housing projects such as Piedmont Courts off Siegle Avenue.

By the 1990s, local and national leaders acknowledged that concentrating the desperately poor in public housing developments was a bad idea. That's when the Republicans took over Congress and began slashing funds for public housing construction. If the Department of Housing and Urban Development built new affordable housing units at all, it would be to raze blighted areas and replace them with mixed-income developments. But adding market-priced units often meant that there would be fewer units for the poor. Meanwhile, housing agencies such as the Charlotte Housing Authority watched their stock of public housing units crumble from disrepair as federal funds dried up.

In the late 1990s, Congress spent $3.8 billion demolishing and replacing dilapidated housing units. By 2004, it had slashed the HOPE IV grant budget from $574 million a year to $149 million. In 2005, they slashed another $5 million off of that.

In the meantime, 123,000 public housing units have been reduced to rubble since 2001 and another 45,000 are scheduled to meet the same fate. Only 40,000 units have been approved by the federal government to replace them.

The new plan was to use Section 8 housing vouchers instead of building new units. That way, landlords, rather than the government, would be responsible for the upkeep of the property rented to Section 8 tenants.

But there was a problem with this plan. There weren't enough new Section 8 vouchers to meet the growing need for public housing. And the private market can't profitably produce housing for those who can only afford to pay $200 a month in rent.

"The federal government is getting out of project-based financing for that kind of housing," said Charlotte City Council member Pat Mumford. "The state doesn't have any money and (housing for the poor) lands to the city."

That system worked out OK over the last five years, when the city's housing trust fund used $45 million in bond money to leverage the creation of more than 2,000 units. Many of those units were for low-income people who could pay enough rent that developers and owners would make a profit if the city chipped in about a fourth of the cost of a project. This allowed the city to leverage its money and create far more units than it could build alone.

But with housing for people who make less than $16,000 a year, the equation changes, said Mumford, and the city would have to pay 100 percent of the cost of construction. Because the average unit costs at least $300 a month for upkeep, maintenance would have to be subsidized as well. And for the first time in decades, the city would have to go it alone, building and subsidizing those units with little federal or state help.

Even council member Susan Burgess, a long-time advocate of affordable housing and economic justice, was left shaking her head. There's no way the city can afford to spend nearly $80 million a year on housing for the desperately poor, she said.

Which will leave many of the city's poorest families essentially where they are right now -- struggling to get by. According to federal government standards, an economically stable family should spend no more than 30 percent of its income on housing costs.

"A lot of times what is happening now is people are paying 50, 60 or 70 percent of their income for rent, or what you'll have is two families and they'll live in one apartment to make the rent affordable," said Paul Woollard, executive director of the Affordable Housing Group of North Carolina and an advisory member of Charlotte's Housing Trust Fund. "They're here and they are paying more than they can afford in rent."

Exactly what will happen if the city's poor population continues to grow and new units aren't built is unknown. "It depends on the influx into Charlotte," said Woollard. "It hasn't gotten to that kind of crisis level yet. But if it gets to a crisis level, it is so much harder to get in front of it."

Mumford said part of the problem is that the affordable housing issue has no "traction" with the public. "I think there is probably some sentiment of, 'Well, why don't those people just get a job. There are jobs out there. They are just lazy,'" Mumford said. "Or there is some over-generalized rationalization for why there is a problem."

The issue is also not on the public radar like other issues that are easier to understand, he said.

"Housing is different," Mumford continued. "It is kind of the invisible issue and there is just not a lot of awareness of the impact of the lack of affordable housing, because it is very complicated. A lot of different agencies are trying to address it so it continues to confuse the general public."