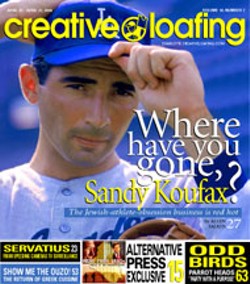 Why do Wallman and Moxson do it?

"People were always asking "is this guy Jewish, is that guy Jewish?'" Wallman replies, tersely. "We decided we would find out and that's what we've done for five and a half years. We find out and people who want to know, they subscribe to our magazine."

A lot do want to know. So many people visit the Michigan Jewish Sports Hall of Fame -- literally a hallway inside the Jewish Community Center of Metropolitan Detroit -- that the 56 plaques are being moved from a back area near the inline hockey center to a more prominent renovated hallway near a health club entrance. The new wall will also contain an interactive touch-screen where visitors can watch videos on the inductees. Among them: Julius Spielberg, who, when he was inducted in 1999 at age 98, was the predominant Senior Olympics speed walker in his age class; Hank Greenberg ("The best," says Steven Simmons who runs the hall); and Benny Friedman, an all-American at Michigan in the 1920s who is also in the NFL Hall of Fame.

The Philadelphia Jewish Sports Hall of Fame, founded with a $100,000 donation from the Rose and Adolph Levis family who continue to give about $10,000 a year, completed an expansion in 2003 from one room to two. The 5,000 annual visitors can now peruse 22 Plexiglas-sealed lockers displaying memorabilia like a basketball uniform from the 1930s-era South Philadelphia Hebrew Association. New inductees include "Dynamite" Dave Smukler, a college and pro football player in the 1930s, and Ed Lerner, a college basketball player in the 1940s.

But those are the minor leagues. The Jewish sports hall of fame that claims to be the National Jewish Sports Hall of Fame is in Commack, Long Island. It was, until recently, also just a hallway filled with plaques leading from the gymnasium to the pool in a Jewish community center. By early 2004, the hall of fame will have expanded into its own airy room where visiting Hebrew School groups will be able to view illustrated timelines of Jewish experiences in the Olympics and other sports. The new room was designed by the same guy who did the Yogi Berra museum in Montclair, New Jersey.

This effort is worth it, director Alan Freedman explains, because with so many Jewish kids pinning posters of Barry Bonds and LeBron James on their walls, we need to make sure they know that Jews can make it as big time athletes, too.

"When it comes down to it," he says. "We're showing that maybe there isn't as much difference between people as we all think and all the jokes about Jewish athletes and Polish scientists and Italian war heroes aren't true. I'm not making it out that Jews are better. All I'm trying to say is we've responded in sports just like everywhere else."

On the Jewish sports' Mt. Rushmore
Not all athletes whose faces are cast in bronze or whose names are uttered lovingly by the Freedmans and Wallmans of the world are playing along. When the spokesperson for Olympic ice skater Sasha Cohen, a gold medal favorite for 2006 who is profiled and pondered and piffed-over in nearly every publication devoted to Jewish athletes, is contacted for an interview request, the spokesperson declines with a pleasant e-mail explaining that Sasha "does not practice Judaism and would not want to lead people the wrong way."

Right now, the best the Tribe has got is Jay Fiedler, the starting quarterback for the Miami Dolphins. He's full-blooded -- no (M), (P) or (C) -- and took the time to show up in Commack, near his native Oceanside, for induction into the Jewish Sports Hall of Fame in 2002.

Dolphins' spokesman Neal Gulkis, however, doesn't sound very optimistic about setting up an interview with Fiedler, even after hearing an explanation that I do not want to talk to him about his faith or about being a Jewish quarterback but would like, instead, to talk about how he feels towards those preparing to engrave his image into some sort of Jewish Mt. Rushmore next to Koufax, Greenberg, and swimmer Mark Spitz -- if only Fiedler can win a Super Bowl.

Gulkis says he gets a lot of calls for interviews with Fiedler about being Jewish. It's unlikely he sees any distinction between the type of story popular in temple newsletters and on Jewish websites, which set out to prove the Airplane joke isn't true and then list Jewish athletes of note, versus a story pondering the world of people obsessed with Jewish athletes.