Where To Find the 5 Oldest MLB Stadiums 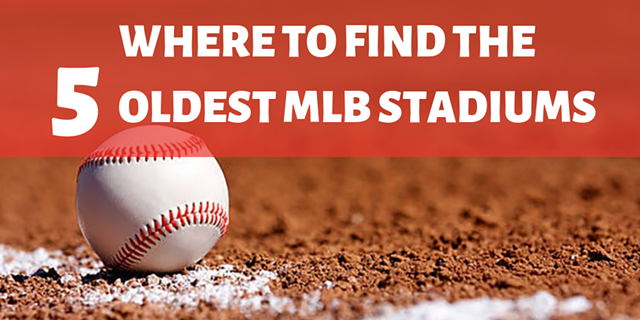 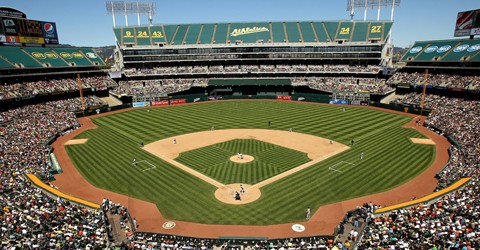 In 2006, the Athletics closed all sections of the upper deck at the Oakland Coliseum to limit the seating capacity and bringing fans closer to the game for a better fan experience. After 11 years of being tarped off, the upper deck reopened for the 2017 season. In March 2017 the Raiders announced plans to relocate to Las Vegas and will take home in a new stadium for the 2020 season. Following suit, the Athletics announced plans in November 2018 to build a new ballpark at Howard Terminal which is part of the Port of Oakland. 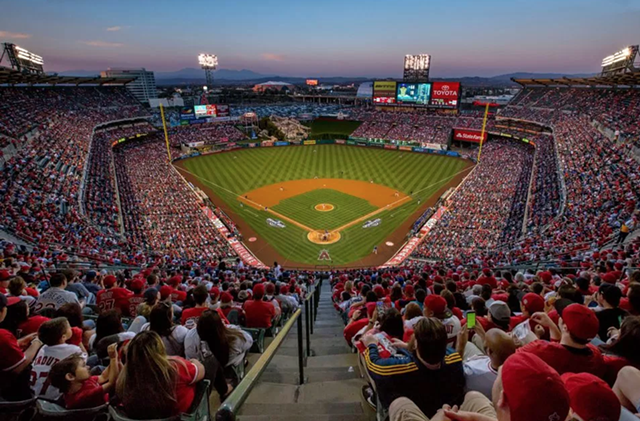 The Angel Stadium of Anaheim has served as the home ballpark of Angels Baseball for over five decades. The Stadium was also the home stadium to the Los Angeles Rams from 1980 to 1994. This ballpark was home to the very first MLB All-Star Game to be played on prime-time television. The Stadium is located just 3 miles from Disneyland. For some time, the team was under the ownership of The Walt Disney Company. In 1994, Walt Disney Pictures remade the 1951 film Angels in the Outfield with the California Angels as the team that receives heavenly assistance. Under Disney’s ownership and the leadership of team manager Mike Scioscia, the Angels won their first pennant and World Series championship in 2002.

In 2003 Arturo “Arte” Moreno, an American businessman purchased the Anaheim Angels baseball team from the Walt Disney Company. The team has gone through several name changes over the years. In 2005, the new owner added “Los Angeles” to the team’s name. The Angel Stadium of Anaheim will host baseball and softball at the 2028 Summer Olympics! 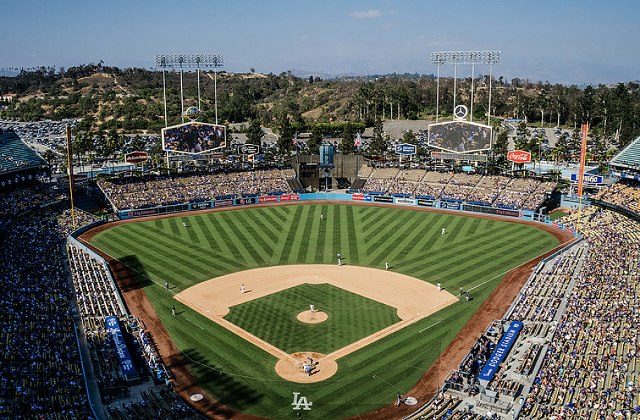 Situated in beautiful Los Angeles, Calfornia, less than 20 rainouts have occurred over 56 years at Dodger Stadium. This is the world’s largest baseball stadium by seat capacity. Often referred to as a “pitchers ballpark”, the stadium has seen 12 no-hitters, two of which were perfect games. Players have hit for the cycle just twice in Dodger Stadium, and only five home runs have been hit completely out of Dodger Stadium. The Dodgers devote significant resources to the ballpark’s maintenance, repainting it every year and employing a full-time crew of gardeners to maintain the site.

Prior to the start of the 2013 season $100 million was spent by Dodger ownership upgrading Dodger Stadium. Following the demolition of the Mets Shea Stadium in 2009, Dodger Stadium became the ONLY stadium with symmetrical outfield dimensions remaining in the National League. During the 2028 Summer Olympics, this stadium will also host Baseball and Softball. 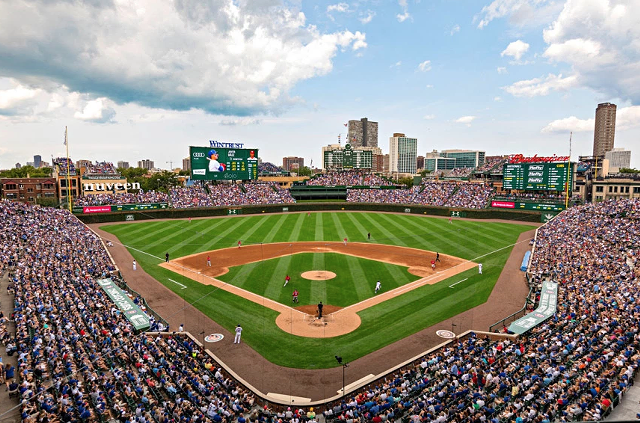 This ballpark is located on the North Side of Chicago, Illinois. Wrigley Field is now the exclusive home to the Chicago Cubs, however, this ballpark has hosted more professional football games than any other stadium in the nation. This field was home of the Chicago Bears from 1921-1970 and was also the home of the Chicago Cardinals (now Arizona Cardinals) from 1931-1938. Wrigley Field was the last Major League park to have lights installed for play after dark, in 1988.

This ballpark is famous for its ivy-covered outfield walls. MLB rules require all outfield walls to be padded, Wrigley Field has been grandfathered into the rules and it is the only MLB stadium without padded walls. The rule is simple: If a ball is lodged in the ivy — visible or not — the outfielder can throw his hands up and the batter is awarded a ground-rule double. However, once an outfielder reaches for the ball, it’s in play. In 2016, the Cubs captured their first World Series Championship since 1908.

Fenway Park is the oldest ballpark in` MLB and home of the reigning 2018 World Series Champions, the Boston Red Socks.

After being postponed three times due to rain, the Boston Red Socks played their first game in Fenway Park on April 20, 1912, against the New York Highlanders (New York Yankees). The Red Sox won the game 7-6 in 11 innings on its grand opening. Fenway Park is the fourth-smallest by seating capacity and second-smallest by total capacity among MLB ballparks. Fenway maintains many charming features, one being a 1934 hand-operated scoreboard. Similar to Wrigley, Fenway has a significant number of obstructed view seats, due to pillars supporting the upper deck. A lone red seat in the right field bleachers (Section 42, Row 37, Seat 21) signifies the longest home run ever hit at Fenway. Hit by Ted Williams in 1946, the distance officially measured at 502 feet. 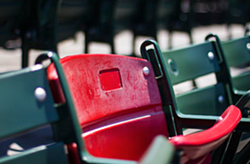 The right field foul line known as “Pesky’s Pole,” stands at 302 feet from home plate, the shortest outfield distance (left or right field) in MLB. (Some argue it’s even shorter than 302 ft.) Nicknamed, The Green Monster, the 37.167 ft left field wall is one of the best-known physical features of any major league ballpark. It’s location and short distance from home plate often benefits right-handers.

Neil Diamond’s “Sweet Caroline” has been played at Fenway Park games since at least 1997, and in the middle of the eighth inning at every game since 2002. Diamond performed the song live on the opening night of the 2010 season. Since its grand opening, Fenway Park has hosted the World Series 11 times, with the Boston RedSox winning six of them, most recently in 2018.

I hope you enjoyed learning about the rich history of MLB stadiums. Enhance your gameday experience and download the MLB Ballpark App to unlock offers and get exclusive in-game features. Available on the Apple AppStore and GooglePlay.