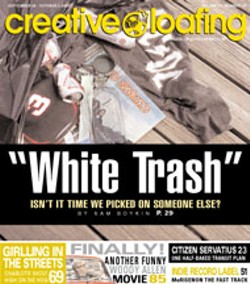 "It's not much, especially when you have a family of seven," Merry said. "We've got the biggest single-wide you can get, but it's still not big enough for us and five kids. We're hoping to move into a bigger double-wide.

"We have to budget our money, but we're not struggling," Merry continued. "If we made $40,000 a year, we might be able to afford a moderate house. But houses are just so expensive. With a mobile home you can get something new, and you don't have to have really good credit. But I could care less if I lived in a big two-story house. That stuff doesn't matter. I feel like our life is complete here."

Like the Haxwells, Merry and David's yard looks like a playground, with a slide, a little pool, various toys, balls and plastic bats strewn about. There are several dozen pairs of shoes - sneakers, boots, galoshes - piled up on the porch near the front door.

As managers of Twin Lakes Mobile Homes, they're in the unenviable position of having to sometimes evict their neighbors. Merry estimates that during their first year as property managers, they evicted over 15 people, mostly because of drugs. As a result, they've had obscenities spray-painted on the office, and all four tires on their "89 Aerostar Van slashed.

"It's been tough," Merry admits. "You have people who drink and do drugs, they don't want to work, and they have a million excuses why they can't pay their rent. It's a hard thing to deal with. My husband is a very merciful man, but when he took this job he had to toughen up. There are a lot of people here who don't like him."

Given all this, one might assume that if anybody would subscribe to the stereotype that poor whites are shiftless dullards, it would be Merry. However, she takes exception to those stereotypes, particularly those pertaining to folks who live in mobile homes. For one, Merry was born and raised in a working-class family in Columbia, SC, and takes pride in her roots. But at the same time, she readily admits that she grew up around folks who some would call rednecks or white trash. It's an ambiguous position that many folks share.

"There are people in any area who are not going to take care of their house or their yard," Merry said. "My dad is an alcoholic, so I know about all the junk associated with lower-income people, evictions, abuse -- all that stuff goes hand in hand. When you have money problems, all your other problems seem exaggerated and you want to escape them.

"Just living in this park has helped me not look at things in such a stereotypical way," Merry continued. "There's something decent in everyone. You can't discount a person's life based on their appearance or where they live."

Merry adds that she often faces prejudices herself -- albeit most of them discreet, which makes them all the more insidious -- and says it's been hard not to develop a bit of a complex.

"Our kids play soccer at Calvary Church," Merry said. "A lot of the other families there live in ritzy areas like Piper Glen, and I definitely feel a little self-conscious when people ask us where we live or what we do. I always say I manage a "mobile home community,' because when you hear "trailer park,' all these visions come into your head. They know we don't make a whole lot of money, and that kind of separates us from them. I don't even think they know they're doing it, but sometimes I can really sense that separation. I always wonder if we invited these people to our house would they be willing to come inside and have a glass of tea? And what would they think?"

As for terms like trailer trash and how the media portrays working class whites, Merry said, "It's frustrating and embarrassing. The media will always take something and exaggerate it and exploit it to the nth degree. The problem with the media -- and the world in general -- is that we fail to see the value of the human being as an individual. Whether they're a big, brawly New Yorker or a Southern redneck. Each person has value. But the media doesn't care about that."

The proposed CBS show The Real Beverly Hillbillies is now in limbo, although many in the industry feel it will eventually be produced when and if the criticisms have died down. CBS has played its card close to the vest and now states that the program's premise isn't to ridicule anyone, but "to question social mores." Casting director Marty Keener Cherrix, who visited the NC mountains last November, insisted she is "not looking to perpetuate the stereotypical mountain image," but instead hopes to find "mountain people with good mountain values." Others at CBS have characterized the series as "a great fish-out-of-water story," and says the show will have a loose structure similar to The Osbournes" Despite CBS brass' declared intentions for the show, given today's reality-TV climate, one can easily envision the show featuring the biggest rubes CBS could find -- or at least people willing to play the part -- blundering and aping their way around Beverly Hills in an open-mouthed, gap-toothed stupor. Moreover, you have to wonder about a show when network brass say its template is a program in which the main character is drug-addled, lumbering and barely intelligible. But then again, nearly eight million viewers tuned in each week to watch him during the show's heyday. In other words, move over Ozzy, here comes Jethro.