Who can take your wardrobe, and make it super-cool? 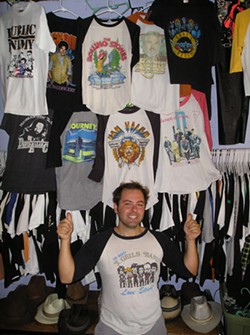 While drinking a cold oat soda at Thomas Street Tavern recently, I noticed a young hipster strutting down the sidewalk, his dark hair carefully disheveled, his well-worn jeans slung low with a chain dangling from the wallet in his back pocket. Completing the outfit was a black Ratt T-shirt from the band's 1985 album, Invasion of Your Privacy. Shoot, 1985 was probably the year that Young Turk in the T-shirt stopped wearing diapers.

I, on the other hand, actually attended a mid-'80s Ratt concert at what used to be the Charlotte Coliseum and is now Independence Arena. I have the ticket stub to prove it (which in 1985 cost $13.50!). It got me feeling a bit sentimental, and I decided to embark on a quest for all things vintage, retro and kitschy.

For a proud member of Generation X, Van Halen T-shirts represent the Holy Grail of vintage goods. So my quest was also a personal mission to find some authentic Van Halen gear (pre-Sammy Hagar, of course) from a time when the mullet was king and Michael Jackson hadn't yet morphed into a freakish alien with a thing for little boys.

The first stop on my trek was Hong Kong Vintage on Central Avenue, which carries an assortment of vintage clothes, furniture and old board games. Elizabeth Steinfels, 29, opened the funky little shop about two years ago.

"Most of my customers are high school and college kids looking for something unique," she said. "Places like Target and Sears are selling Pink Floyd and AC/DC shirts now, but there's still something special about having the original with all the rips and holes."

Next, I scooted over to the Rat's Nest, a vintage shop in a purple building over in NoDa. As soon as I walked through the front door, I knew I'd hit pay dirt. Along one wall was a treasure trove of old T-shirts, including Rare Earth, John Denver (with a picture of a plane on the front, no less), Wolfman Jack, Peter Frampton, Huey Lewis and Eddie Money (autographed!). There also were several Charlotte-centric T-shirts, including an "I Survived Hugo and the Jim Bakker Trial," with a picture of the fallen PTL televangelist (and ex-hubby of lovely Tammy) curled into a fetal position.

Owner Brian Wilson (no really, that's his real name) is a long-time collector of vintage country and rock T-shirts. The 36-year-old Wilson opened Rat's Nest in September, and so far, it's been a lucrative venture. He recently sold a 1978 AC/DC T-shirt for a whopping $95. Moreover, about a month ago, a wardrobe coordinator for the upcoming Will Ferrell NASCAR movie bought a bunch of cowboy shirts, polyester short-sleeve button-up shirts and mesh tops. The wardrobe director's assistant, who had worked on the Billy Bob Thornton movie Friday Night Lights, purchased a 1983 Willie Nelson shirt to give Thornton for his upcoming 50th birthday.

Wilson has a seriously cool personal collection, too, including a 1981 Rolling Stones concert T-shirt. His favorite, though, is the David Allan Coe shirt he found for $2.50 at Goodwill.

Yet even among such a bounty of vintage rock gear, there was no Van Halen stuff. When the girl behind the counter heard me mention my object of desire to Brian, she perked up. Turned out she's Brian's 24-year-old sister, Sheila, who excitedly told me about her 1982 Van Halen baseball shirt from the band's Diver Down tour, my very first rock concert!

"Hmm, probably not for anything," she said. "It's one of my favorites. Every time I wear it, somebody tries to buy it. I even had a guy offer me $100 for it but I turned him down."

"Ha," I half-laughed back, not too convincingly. "Yeah, that's funny."

I shuffled out of the Rat's Nest, bowed, but not broken. The search for my beloved Van Halen T-shirt will continue. And as Diamond David Lee Roth is my witness, I will find you!