As the economy continues to slide into the crapper, some Charlotte residents, community leaders and entrepreneurs are working to keep the businesses in their communities afloat by initiating "shop local" campaigns.

The hope behind these initiatives is that neighbors will choose to spend cash close to home and buy what they can from shops in their own neighborhoods.

James Mathis, Historic South End director for Center City Partners, said it was about last fall when things started to get tight.

"Anyone who was paying attention knew that the economy was declining," said Mathis. "I started to hear from my retailers down in South End that things were a little tight and there was less traffic. They were really looking to Thanksgiving and Christmas as being really vital to their year. That's when we leaped into action."

Mathis leapt and helped to launch the Web site www.discover-southend.com, which was designed to direct more people to South End-based businesses. The site hit the Internet a week before Thanksgiving in an effort to help shops in the neighborhood during the holiday shopping season.

"We created it in two weeks and [South End business owners] put their information on there," he said. Take a visit to the Web destination now and you'll see South End shops -- including restaurants, clothing shops and art galleries -- listed, along with the businesses hours of operation and directions.

Once it was constructed, www.discover-southend.com was promoted via ads in local magazines, banners on buildings in South End and through Center City Partners' marketing department.

"In this economy, it was important. It's one of those deals where in tight times you sort of tighten your straps and do what you have to do to survive and make through this bad economy," said Mathis. "The feedback that I've received is that [residents and business owners] feel a camaraderie when they go and shop locally. They feel like if they are going to spend money that they would like to spend money with people who are going through the same things that they are." 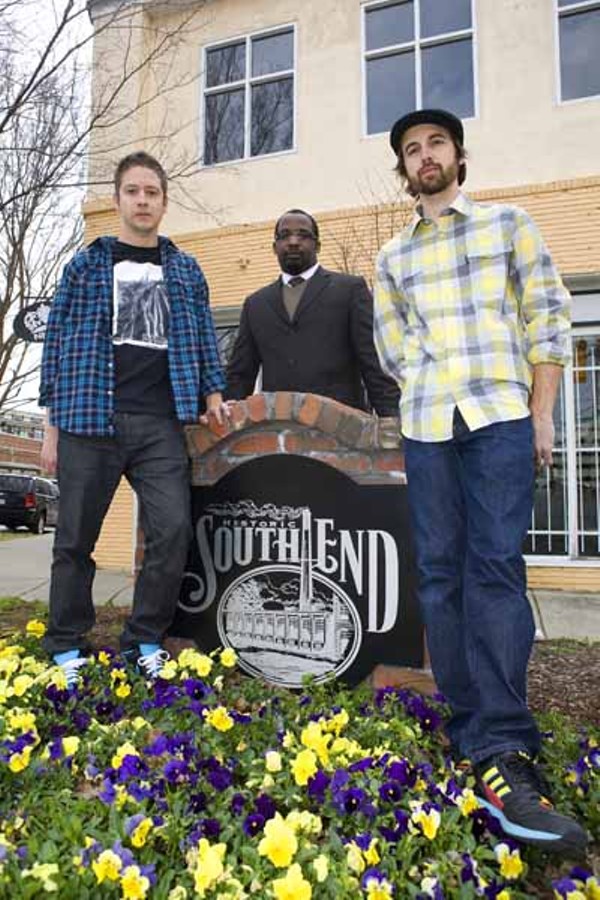 South End retailer Bobby Webster, one of the owners of the street-wear boutique Niche (which is listed on Discover-Southend), said that he doesn't know where most of his customers live; however, he's recently joined forces with other businesses on his street to host events and build excitement about the shops on his block.

"We teamed up with Apostrophe [Lounge] across the street a few Fridays ago ... we did an in-store event here, and afterwards, we took the party across the street," said Webster. Niche and Apostrophe, along with skate/clothing shop Black Sheep, will combine resources again in April to host a sneaker fashion show -- with more to come in the future. "That's going to be an ongoing thing here. Every third Friday either myself or Black Sheep might take turns doing an in-store [event] and then the after party at Apostrophe."

Josh Frazier, owner of Black Sheep, said he's seeing more people in his store and a renewed interest in South End. That interest, he said, has already begun to help the businesses in the area and has drawn new businesses to his slice of the Queen City.

A few miles away, the members of Elizabeth's neighborhood association are hoping to have that sort of success with their own shop local initiative.

The Elizabeth Community Association recently launched the "Liz Biz Promotional Card," a program that gives residents of Elizabeth a discount at neighborhood businesses that have partnered with the community association.

The program has been in development for about three months and kicked off in March.

Terry Lett, Elizabeth Community business liaison, said, "The main reason we decided to do this was to drive our membership -- so that there would be a benefit to joining the ECA. We talked to some businesses to see if they would offer some incentives for the neighborhood."

So far, Lett said, businesses like Carpe Diem, NOFO and Nothing But Noodles have signed up to offer discounts to community members.

Ultimately, Lett and other community association members hope that people will realize what businesses are available to them in the community.

"We want to promote our local businesses because they are what make our neighborhood so unique," said Lett.

So far, Lett hasn't seen any Elizabeth-area businesses close their doors. "But I do know of some businesses that have cut back hours and had to lay off staff, and that's been very hard for them."

And although you have to live in Elizabeth to be a card-carrying member of the Liz Biz campaign, Lett said the neighborhood would love it if people from all over the Queen City supported the Elizabeth businesses.

But, all that said, for people who have more city-wide business interests -- ones not targeting consumers in specific neighborhoods -- can community-shopping campaigns actually do more harm than good?

Kit Cramer, executive director of member value for the Charlotte Chamber, argues that partnerships like these won't have a negative effect on the business community as a whole.

"Anything that stimulates the economy right now is a good thing," said Cramer. "I think businesses need to be partnering and reaching out as much as they can. Starting out local is a great way to do that."

Mathis concurred, adding that though there is a push in South End for residents to support the retail and restaurants there, it doesn't mean that people shouldn't shop elsewhere.

"Obviously, you cannot find every single thing -- and nor do you want to live your entire life -- in South End. That's not the point of this. The point is when you find yourself in an opportunity to go to lunch somewhere or buy something that isn't specifically found in other places, why not support your neighbor?"

« Styling and profiling at Pop Life  |  Sale of the Day: Wednesday »