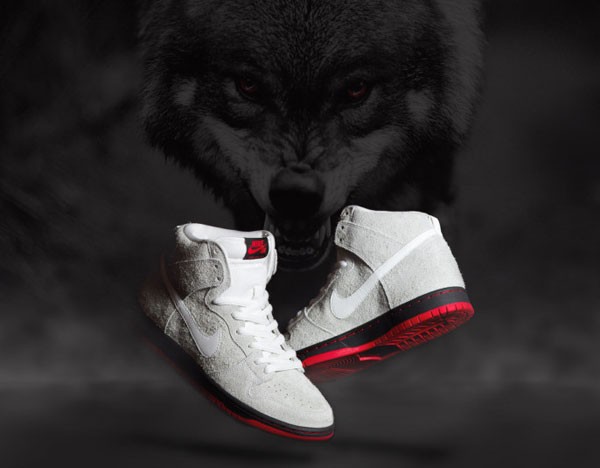 Snow and ice couldn't stop over 100 people from showing up at Black Sheep Skate Shop in Plaza Midwood on Saturday morning to sell the store out of the “Wolf in Sheep’s Clothing” sneakers, the store’s newest collaboration with Nike SB, so it’s no surprise that today’s nationwide release saw the shoes disappearing from Nike’s site and independent shops around the country within minutes.

“I’m struggling to even describe it,” said Black Sheep founder Josh Frazier of the national reaction to the shoe’s release.

Not only did Black Sheep sell out of nearly 150 pairs of the Dunk High Traditional sneakers, — then go through an undisclosed amount of pairs available online in three minutes — on Saturday, but the Nike website also sold out of the shoes within a matter of minutes this morning.

“I was shocked by how quickly it sold out. It’s sort of unprecedented for it to sell out that quickly on Nike,” Frazier said. “I’m kind of reeling from the whole thing right now.”

seemingly simple design. The shoe’s “Summit White” vintage suede along with white tongue and white Nike swoosh give the appearance and feel of a “sheep,” but sinister designs lurk below.

The white swoosh is susceptible to wear, and once its worn down or taken off scratch-off style, the shoe bears fangs once hidden within the iconic checkmark. The soles also depict a wolf's face in a symmetrically drawn graphic.

The “Wolf” is Black Sheep’s second collabo with Nike SB. The 2014 “Paid in Full” Dunk High sneakers featuring a Gucci print were hugely popular, and became even moreso after a legal snafu led to a recall, but even those can’t compare to the reaction the new “Wolf in Sheep’s Clothing” got.

What Frazier believes put things over the top for Black Sheep in terms of local sales was the exclusive packaging he put together with the help of some partners that drove collectors to the newly relocated shop on Saturday. A purchase at Black Sheep included a specially designed box, an exclusive “Wolf in Sheep’s Clothing” dust bag and other accessories — namely the exclusive shoe laces designed by San Francisco-based company Fully Laced that feature a pattern of blood spatter to go along with the shoe’s theme.

“We created the box to give us a point of differentiation. There are a lot of collectors out there, we wanted to give them a reason to want to purchase it from us,” Frazier said. He also shared the special packaging with some other independent shops around the country — “our friends,” as Fraziers puts it — as a way to support local ventures.

As could be seen in retweets on Black Sheep’s Twitter account throughout the day today, local shops throughout the country sold out on Thursday just as quick as he did on Saturday, and by afternoon, the only pairs available online were size 6 or lower, for the most part.

In fact, except for the tight-knit sneakerhead community here in Charlotte, the release came and went with little fanfare locally, while national and international sneaker blogs hailed the release.

“I feel like we’ve gotten a lot more national coverage than we have locally,” Frazier said. “We’re kind of wondering, does anyone here even know?”

Unfortunately, if you’re just now finding out, it’s too late. The nature of the “quick strike” release, as Nike calls it, is to create buzz around a very limited release. Once their gone, there’s not much of a chance you’ll find them in stock anywhere again.

“I’m hoping that we might see a small restock, but I’m not certain,” Frazier said. “We sold through our allotment. Everyone is sold out at this point. It’s sort of the nature of these types of products. It’s sort of evaporated.”

Available today in store until 11:15am. After that online at 12 Noon EST pic.twitter.com/sHusgr9XHd

They’ll certainly reappear online as resellers look to turn quick profit on the quick strike, as they’re wont to do, but as far as finding a decently priced pair with all the packaging, the odds are against you.

A release like this only comes around so often, and like the breath of a wolf hunting on a snowy day, the shoes will disappear into thin air as quickly as they appeared.