Just another night at Common Market... | QC After Dark
Switch to the mobile version of this page.

Out For The Night Just another night at Common Market... 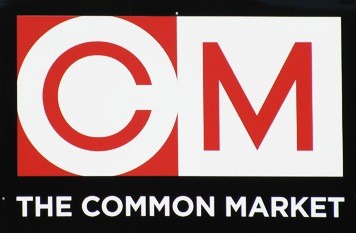 So, I'm, at first, mostly ignoring - and slightly chuckling at - the two late-30s former frat boys (by the looks of them) singing "Dock of the Bay" to each other. It's almost kind of cute, except that they don't have a tone-hearing ear between them.

But then it's time to go, and when they are told this they aren't happy. One of them says, "Fuck you," to the Common Market employee who has just told them to leave.

"Fuck me?!? Did you say fuck me?" He tries to play it off, denies it, says, "Okay, okay, okay" a bunch of times while attempting to stand, as the Common Market employee produces a small flashlight from his pocket and shines it in the drunk's face.

Finally they get up to leave, stumbling, as one of them eyes the rather newly installed lights on the brick and cement column separating the patio from the sidewalk.

He takes his big, meaty paw and slaps the first light. BAM! It snaps off its plastic base and hangs sideways by the wires like a crooked tooth. BAM! He hits the next one. BAM! The next one.

By now, the initial stunned silence from the fellow customers and the couple of employees transforms into yells of "Whoa!" "What the fuck?!" and good, old-fashioned boos.

He takes a swing at one last light, hitting it but not breaking it, and then takes off running. Next thing I know, there's a crowd chasing after him, led by three Pinky's employees, still wearing their matching work shirts.

They disappear around the corner and those of us left talk among ourselves at the ridiculousness of what we just witnessed. But the night's ridiculousness isn't over yet. Alcohol is a hell of a drug.

An obviously intoxicated woman appears seemingly out of nowhere and starts screaming at what, from the context of her yelling, seems to be an ex-boyfriend. She is in a tight fitting top and cutoff jean shorts, front pockets poking out at the bottom.

Another, now thoroughly exasperated, Common Market employee tells her, "Hey, take it off the property."

The guy she was screaming at tries to grab her and remove her from the property, but this only angers her more. This begins a series of actions whereby it looks like she will let herself be taken away, but then claws her way back to the patio, screaming obscenities while people openly laugh at her.

Finally she's taken around the same corner the light smasher disappeared to, and we catch wind of a house show. Adam and I finish our beers and leave to finish the night off listening to a new local favorite, Cop Graves, play.

When we turn the infamous corner, there is the drunk girl, still screaming at the CM employee. We've had enough, Adam and I, so we start yelling obscenities at her, for some reason in British accents (it's classier that way?).

"You stupid bloody bitch, no one likes you, go home. You're a vile piece of trash. Go away!" and so on. Two wrongs don't make a right, but screw it.

This gets the following reaction: Laughter from onlookers, a confused look on the drunk girl's face - where did these guys come from and why are they yelling at me in bad British accents? - and a cop we didn't see until just then, yelling at us to, "Keep it moving!"

The drunk girl seems to snap out of her unjustified anger by the absurdity of our insults - or maybe she just now saw that cop too - and finally walks away. I half yell something stupid about my constitutional right to the freedom of disturbing the peace, and Adam, drunker than I but with, apparently, a better sense, grabs me by the arm and leads me in the direction of the car before I end up getting arrested.

I caught up with one of the Pinky's employees later and he tells me the light smasher got arrested. Good. Don't fuck with Common Market. You will lose.

Also, don't fuck with Cop Graves. They played a great set, covered in red paint and surrounded by cigarette smoke.

Just another Saturday night in the Queen City.