Spot Shots | QC After Dark | Creative Loafing Charlotte
Switch to the mobile version of this page.

Knocturnal is the embodiment of hip-hop. On any Monday night at Snug Harbor, you'll find a b-boy cypher (breakdancing) in front of the stage backed by hip-hop and funky breaks played by Knocturnal creator, Justin Aswell and resident DJ A-Minor (Andre Barden).

Every first Monday of the month, cyphers battle it out for prizes which range from cash to concert tickets. After midnight, the b-boy dance floor moves to the back of the room to make way for a dance party that lasts until the club closes at 2 a.m. There's also an emcee cypher and, like the B-boys, be prepared to get called out if you want to participate, though in the end, it's all love. At 1 a.m., resident DJ Collectr (Will Gilreath) plays a range of dance music from house to techno to close out the night.

If that's not enough, Knocturnal has also brought in its share of hip-hop's finest — Geto Boys, Kool Keith, Slick Rick, Gift of Gab and Homeboy Sandman are just some of the artists who have graced the stage.

What continues to draw people to Knocturnal is the format — incorporating a variety of elements into one night so that no one gets bored. While any true hip hop head enjoys hearing good freestyle and battle rap, people also want to dance and keeping those people happy is what could be the difference in a thriving hip hop night and a slowly flopping one. 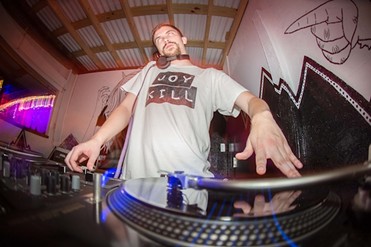