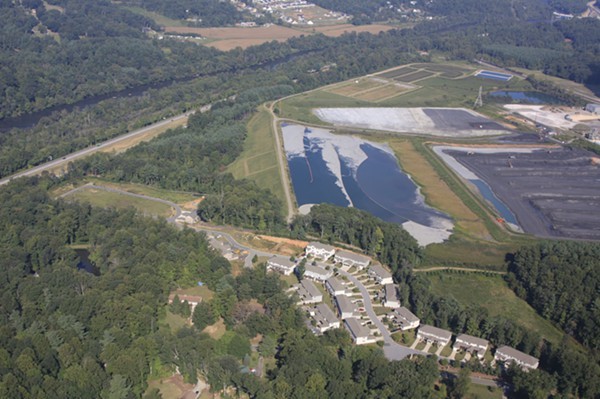 Today is the last day to comment on the settlement that's been proposed between North Carolina's Department of Environment and Natural Resources and Duke Energy that could end the state's lawsuit over coal ash contamination in state waterways. To comment, all you have to do is email your remarks to lisa.palmer@ncdenr.gov.

Without getting too deep into the litigious weeds, Duke Energy has been sued several times by different entities in recent months over coal ash contamination polluting North Carolina waterways, including Mountain Island Lake, which is the main drinking water source for the Charlotte-metro area.

There are lawsuits pending in Mecklenburg and Wake counties and in federal court, but the aim of the litigants is the same in all cases: force Duke Energy to clean up coal ash impoundments that are contaminating state waterways.

In regard to the state's lawsuits against Duke Energy, the two entities have come up with a "settlement" (it's actually called a proposed consent order) that's pending in state court regarding the Department of Environment and Natural Resources' lawsuit against Duke Energy. In that lawsuit, the state alleges that the power company is contaminating water near both Asheville and Charlotte and that contaminated water is bad for humans and the environment.

It's the settlement for this lawsuit that the public has been invited to comment on, but today is the last day to do so. In great news, and as we pointed out before, the comment process is as easy as sending an email to lisa.palmer@ncdenr.gov. Seriously. That is all you have to do to have a say-so in one of the pending coal ash lawsuits against Duke Energy.

Review the state's documentation for this lawsuit here.

Susan Massengale of the N.C. Department of Environment and Natural Resources wrote in an email, "We encourage all interested groups and individuals to send us whatever documentation, data and additional materials they feel should be included that is related to this issue. It will all become part of the public record."

Massengale went on to explain how the public comments will be factored into the state's and the judge's decision-making process:

The public comment period lasts 30 days, until August 14. After that, staff will take 30 days to review the comments received and make recommendations for any appropriate changes to the document. A summary of the comments and the final proposed agreement will be given to the Superior Court judge presiding over civil actions. The judge can take whatever time he or she feels is appropriate to review the materials before making a decision.

Per the N.C. Department of Environment and Natural Resources, the settlement that the public is being encouraged to comment on includes fines that Duke Energy will be responsible for paying.

The proposed consent order imposes a total initial monetary fine of $99,111.72. In addition, if the companies fail to comply in a timely manner with any provision of the consent order (including the timely submission of any document or plan and the completion of any activity), they would be subject to fines of $1,000 per day for the first 30 days, and $5,000 per day thereafter for each violation.

Know that since the company negotiated the current settlement, it is good with it as-is. "Duke Energy believes this is a mutually agreeable resolution," wrote company spokeswoman Erin Culbert in an email.

Culbert also explained that the company is not yet clear on how much it will cost to permanently close the coal ash impoundments in Asheville or near Charlotte, due in large part to all of the pending lawsuits and both state and federal regulations that are in flux.

While the state didn't discourage this action, it didn't encourage the judge either, according to attorney Frank Holleman from the Southern Environmental Law Center in an email. "[North Carolina's Department of Environment and Natural Resources] could have consented to our intervention, or have supported our intervention and asked the Court to allow us to participate. Instead, DENR said it was taking no position while making points at the argument that were harmful to our intervention motion," wrote Holleman.

Here's a snippet from a press release about that court-win:


The Southern Environmental Law Center represents the Sierra Cub, the Waterkeeper Alliance, and the Western North Carolina Alliance in the Asheville suit and the Catawba Riverkeeper in Mountain Island Lake suit.
Duke Energy had sought to keep the conservation groups out of both suits.

"Independent citizen groups must be at the table to ensure that the region's drinking water is protected," said Frank Holleman, senior attorney at the Southern Environmental Law Center, representing the Catawba Riverkeeper Foundation in the Mountain Island Lake suit. "Now, we can work in the state suits to clean up Duke Energy's coal ash pollution."

Mountain Island Lake on the Catawba River in Gaston County is the drinking water reservoir for 860,000 people in Charlotte, Mecklenburg County, Gastonia and Mount Holly. Duke Energy stores 2.7 million tons of coal ash in lagoons on the banks of the Lake that leak into the drinking water reservoir, contaminate groundwater, and discharge pollutants including arsenic, cobalt, manganese, and iron.

Read the entire press release from the Southern Environmental Law Center here, and Duke Energy's motion to prevent the environmental groups from participating in the judicial process here (PDF).