The Oddball Comedy & Curiosity Festival delivered in surprisingly non-tedious fashion, for a six-hour-long show. Of course, the parking lot of the PNC Music Pavilion was an unattended zoo, full of lawn jockeys pregaming 12-packs to avoid the $15-dollar beers inside. And if the sound of metal on metal is any indication, a number of people overdid that little tradition. But another tradition, show-stealing, made it all worthwhile.

That’s right — there was a lot of stealing going on at Oddball, beyond the $5-dollar cups of tap water. The biggest was Aziz Ansari’s total theft of Louis C.K.’s thunder, but there were other instances, too. Jeff Ross hosted the show, opening with his own particular brand of racist, sexist, fat-phobic humor that he tries to excuse by pointing out he’s Jewish and fat. His attacks on audience members have softened some over the years, but I really thought the oppositional defiant disorder-as-comedy schtick went out with the ‘90s.

Brent Morin promptly grabbed the spotlight and saved the mood with a genuinely funny, vulnerable act. The star of Undateable talked about his secret guilty pleasure: watching British X-Factor while drunk and crying over the back stories of the plucky, talented waifs. He even showed off his own talents with a singing bit that showcased his considerable pipes. It was a tough act to follow for veteran Marc Maron, who looked rather dazed to be the third-biggest name on the bill but second in the lineup. Maron’s been sober 15 years, limiting much of his act to expounding on his newest addiction: ice cream.

The funniest bits were when the comics drew from a point of view that only comes with age. Maron refreshed his neurotic stage persona with a joke about being a 50-year-old, twice-divorced guy with no kids — “I’m starting to think I won,” in light of stories from friends who love their spouses and kids, but wish they could simply die in peace. Louis C.K. shined when talking about sex and the boys in his daughters’ neighborhood. “I’d tell them if you get the green light from a girl, don’t take it the first time. If she meant it, you’ll get it again. Sometimes no means no, and sometimes yes means I think I’m gonna have to fuck you to get outta here.”

Reggie Watts brought some variety to the show. The fuzzy-froed weirdo set up a sampler, looping beats as he rambled like a snake oil-motivational speaker, doling out non-sequitur gems like “If nobody you ever met loved you more than anybody you’ve ever known, why, you’ve got a chance,” and “If you don’t believe in yourself, you don’t exist.” Watts’ big finish, a musical performance combining impersonations of Loretta Lynn, Bonnie Raitt, Hank Williams and Fatboy Slim, was inspired, judging from the crowd’s reaction. Given my unfamiliarity with those influences, I couldn’t truly say.

Another comedian to score with a musical performance, Hannibal Buress, closed his set yelling nonsensical rhymes in a shiny silver suit, to a backdrop of dancing ballerinas. The parody of hip-hop obsession with status and lyrical incoherence was spot-on. Chris Hardwick (The Nerdist) was less successful, with a stale round of seniors-on-Twitter and vulgar dad jokes. 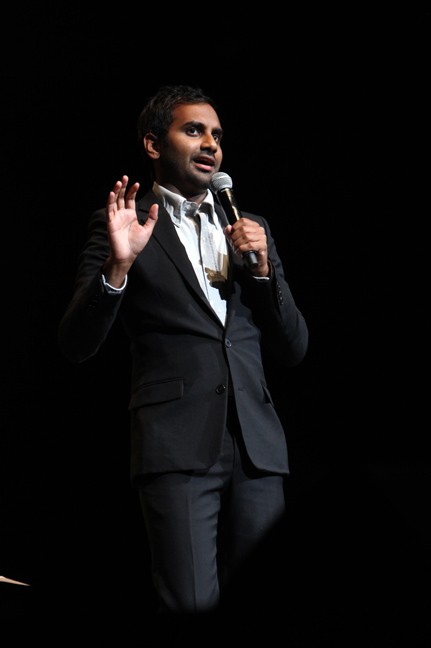 But the night belonged to Aziz. From the start of his set, the Carolinas homeboy (he grew up in Bennetsville, S.C.) connected with the crowd, talking about the region in a way that showed he didn’t consider the state alien rube country. (Louis C.K. opened his set saying he would never visit Charlotte except on tour, and reminisced about a “shitty club” he’d played here years ago). Ansari even shouted out Zaxby’s in his warm-up.

His father’s story, of overcoming adversity and racism in small-town South Carolina - then killing the racist and taking his job - contrasted with the tale of his mom’s first day in America, the perfect set-up for the rest of Ansari’s act, which focused on the differences between men and women. From Twitter to city blocks, the world is not a safe space for women, Aziz sympathizes.

Aziz’s continued stand-up work between TV and film gigs shows in his performances. His timing and characterizations are pitch-perfect; he glides between poignant and stupid with ease and knows just how to tread the line in his persona between absurdity and unbelievability. His crowd control in insane.

Louis C.K., on the other hand, recently may have spent too much time scripting stand-up lines for Louie and not enough time on actual stages slinging jokes. Ansari’s energetic performance delivered the tour headliner a fired-up crowd, but he proceeded to put on a lazy and uninspired show. Given, comparing the two is like comparing puppies and panda bears, but C.K. sounded bored telling his own jokes, about such non-starters as abortion (“I’m glad our moms didn’t”) and babies (“They cry on planes because gays are getting married”). His joke about Stupid, a character he plays for his daughters who is so dumb, he thinks he’s a black character from a racist 1930s film, bombed so badly even he had to acknowledge it.

Ansari had gifted him with a crowd that was literally cheering for anything, but C.K. squandered it by trying his hand at conservative irony and failing. Every great comedian takes risks that don’t always pan out, and in that hyper-competetive field there’s always someone younger hungry to steal your shine, but he better watch out, or his comedy crown may go missing next.