We'll start by saying that lists like the ones below aren’t the type of thing you’ll regularly see in Creative Loafing, but following the publication of a click bait listicle titled “The Top 10 Reasons to Hate the Carolina Panthers” by an unnamed alt weekly in Phoenix leading up to the NFC Championship game, we felt the need to stand by our boys.

Now, we could have stooped to that level and tried some similar nonsense tearing apart the Denver Broncos team or Arizona Cardinals fans (although we’re pretty sure there are none left after only two fans showed up to meet them in Phoenix following the loss) but we’d rather stay positive and share the 10 reasons we couldn’t be more excited for February 7.

10. Michael Oher…The Blind Side guy is finally having his come-uppance

Michael Oher was certainly a big name coming out of the draft; an Oscar-nominated film depicting his life as a troubled black youth adopted by a well-to-do white woman played by Sandra Bullock certainly made him one of the most visible players in the 2009 draft.

He never panned out as the great player fans of the movie hoped he could be, and after being signed by the Panthers in 2015, he made it known to reporters that he was sick of talking about The Blind Side and believes the movie, which he didn't even like, hurt his career.

On Wednesday, Cam Newton said he made an extra effort to recruit Oher to the Panthers, mainly with texts like one saying, “I fucking need you.” He ended up being very right. While Oher has still struggled to be effective as a run blocker this year, he has been a huge help in pass protection on Newton’s blind side (We know, we know). 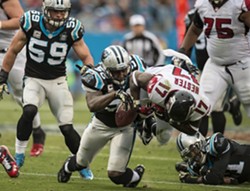 9. Best uniforms in the NFL

This is not just us talking; the Panthers’ all-black jerseys were literally voted the best NFL uniforms of all time by fans in an NFL.com poll two years ago.

They chose not to go with the all-blacks, however, and will be rocking the black jerseys with silver pants and helmets at Super Bowl 50 in San Francisco on February 7.

The only uniform combination out of the question for the Panthers at the Super Bowl was the all-white pairing they’ve been donning in both playoff wins thus far. As the home team, the Denver Broncos had first pick for unis and went with their own white road outfits, with owner John Elway stating that the Broncos’ 0-4 Super Bowl record while wearing orange played a part in the decision.

With a team like this year’s Panthers, though, who needs superstition?

When star wide receiver Kelvin Benjamin went down in the preseason with a season-ending knee injury, it looked like the jig was up for any serious playoff hopes this year. An already laughed-at receiving corps had just become decimated in the eyes of many, and the team was largely brushed off by national media.

Perhaps inspired by Benjamin’s injury – and Newton’s continually improving play throughout the season – the rest of the team stepped up and filled in any gaps efficiently enough to end the season as the league’s leading scorers; they've put up more than 32 points per game, including the playoffs.

Save for an embarrassing loss to the rival Falcons on December 27 – which arguably served a purpose as a wake-up call that convinced them of their mortality – the Panthers have proved the naysayers wrong and been nearly perfect on the season.

They never made it easy, though, did they?

The Panthers earned the moniker "Cardiac Cats" during their last Super Bowl run in 2003, when they had a propensity for squeaking out of close games with wins. They're back at it this year, and that sounds all well and good until you realize how many of those games this season shouldn’t have been close at all.

Four times this season alone the Panthers have blown big leads before skating out with a win, causing fans like ourselves to then have to apologize to nearby family members for the expletive-ridden tirades and breakable objects now shattered against the walls.

Perhaps the toughest one to watch was the Dec. 20 game against the New York Giants, in which the Panthers gave up a 28-point lead, tying the record for the largest regular season comeback in NFL history, and leaving Panthers fans exhausted in front of their television screens once again following a game-winning field goal from Graham Gano in the final seconds.

We’ve all seen the meme: two-thirds of the Earth is covered by water and the other third is covered by Luke Kuechly. Attending a home game at Bank of America Stadium (and even watching from home sometimes) the feeling one gets when Kuechly gets that first tackle and the entire crowd rolls into its first simultaneous “Luuuuuukkkeeee” chant is beat only by the bliss of a touchdown scored.

Kuechly immediately got down to business as a rookie in 2012, earning the AP Defensive Rookie of the year title, and has only continued to rack up accomplishments in his three years since. In 2015, Luke was named the 14th best player in the NFL by fellow players in an NFL.com vote and was also named to his third Pro Bowl in a four-year career.

He’s enough of a fan favorite to send guys flying out of the stands and onto the field in attempts to celebrate with him, as was seen in the NFC Championship following his pick-6, but let’s just admire him from afar from now on, alright?

Sure, every time they show him on national television he looks like he just found out his granddaughter is dating Greg Hardy, but not enough can be said about all the things Panthers founder and owner Jerry Richardson has done for the Charlotte community over the years.

He even seems to be loosening up with all of this year's success, as Cam Newton got him to dab this year after the Panthers clinched the NFC South for a third straight year. The Big (Grumpy) Cat’s goodwill has made it into the headlines this week, as word has gotten around that Richardson has offered to pay the way for every member of the Panthers organization to see the Super Bowl next Sunday.

Richardson will reportedly pay for every staff member (even interns) to travel to San Francisco, just as he did in 2004 when the Panthers went to Houston to face the Patriots in the big game. A guy like that doesn’t have to smile to be alright in our books.

It’s hard not to include the fans or the coaching staff in this short list, but it’s important not to understate the importance of a coach who also happens to be the team’s biggest fan, and we think he can represent on this list for everyone we left off.

Six-year-old Braylon Beam was being treated for a tumor on his optic nerve when he was named an honorary coach of the Panthers at Fan Fest in August. In September, he announced to the team that his cancer was in regression, and he’s continued to be right alongside the Panthers throughout the season. He’s even appeared on Ellen, more concerned with convincing the host to switch her loyalties from the Saints to the Panthers than with the gifts being bestowed upon him.

Also, if you haven’t watched Braylon’s #JustKeepDancing chemo dance parties, do yourself a favor.

Giving the ball to kids wearing Panthers gear in the stands has been Cam Newton’s signature move since his rookie season in 2011, and this year he’s brought that to the next level.

A few facts explain how the “Sunday Giveaway,” as it’s become known, has now begun to gain national recognition. The Panthers are scoring at a higher rate than ever before, other teammates are now following suit and the near-perfect regular season followed by a playoff run has flexed the Panthers into regular nationally televised games during the last couple months.

A few Grinches have tried to put an end to the gift-giving this season – former Panther Julius Peppers snatched the ball away after a score and threw it away during the Packers game and a New Orleans ball boy played an ill-fated game of keep-away with the quarterback following an early December touchdown – but Cam always finds a way.

The two words were taken from a fiery speech from coach and former Panthers linebacker Sam Mills to the team before a playoff game against Dallas in 2003. Mills was demanding that the team prove they were fighters, the way he felt in his fight against intestinal cancer.

Two years later, Mills passed away, but his words stayed alive and turned into a mantra that is now painted on the walls of the team’s weight room and this year became a chant done back and forth between thousands of fans at Panthers home games, as can be heard clearly in this video.

The mantra has now turned into an attitude that seeps into every aspect of the Panthers organization. This attitude is perhaps best embodied by another Panthers linebacker who will go down in history, Thomas Davis Sr.

Davis has fought back from an unheard-of three ACL surgeries in three years and remained one of the Panthers best players, earning his way to his first Pro Bowl selection this year.

Now, as the Panthers get ready to head to San Francisco, Davis has one more trick up his bloodied sleeve. Davis broke his arm in the first half of the Panthers NFC Championship win against the Arizona Cardinals, and within hours he was already in surgery having plates and screws put into the bones of his arm. Now, all reports point to Davis playing in Super Bowl 50 with that broken arm, but we wouldn’t have expected anything less.

What is there left to say that sour-ass fans writing from Green Bay or Seattle haven’t already said for us in the Charlotte Observer editorial pages?

Cam is the MVP, and that’s all there is to it.

His dabbing, his Sunday Giveaways (see above), his community work off the field, his ridiculous talent for slipping out of pressure to make big plays on it…there’s nothing we would change about our quarterback.

That also goes for his unapologetic attitude for having fun while he’s in between the lines. It puts things into perspective that we’re watching a bunch of guys play a game at the end of the day. You just do you, Cam, because right now, we know we’re watching the best player who’s ever done it in a Panthers jersey.