QC After Dark / News The Common Market after dark...

When my friend told me she wanted to go to the Common Market for a girls night out I asked her if she was on crack.

“You’ve never been?” she asked.

“Yeah, in the afternoon to get lunch or stock up on my hippie snacks,” associating the Common Market with a cool convenience store-slash-deli... but as it turns out, it’s also a -slash bar — CM After Dark, if you will.

I walked into the Common Market at 10 p.m. on a weekend night to a DJ playing Boys II Men, a bartender serving wine, a cooler reading, “cold and cheap beer” and an entire cooler of Sparks (which excited me by the way).

Meanwhile, you can go and select your own beer out of the cooler from $2 Tecate to the rarest of imports, pay the cashier and sit down at the bar — Swig and drink it. It’s like the Willy Wonka Hop Factory — there’s even chocolate beer...

I mean, God bless America, and God bless J.D. Lewis for coming to Charlotte, starting the Actor’s Lab and creating the play Amerwrecka that avowed what war is good for... absolutely nothing (cue the Edwin Starr song as used in the play).

The play begins with the historic killing of the four unarmed American students at Kent State University, shot by the National Guard at a peace rally on May 4, 1970. Thirty-five years later, they return to earth on a mission to peacefully shake up the current political climate in the states.

Speaking of war, remember “Operation Shock and Awe”? Well, this play shocks and awes. That, and makes you want to go start a revolution. Like my tickets to RENT indicated in big, bold letters: “ADULT LANGUAGE”... The sign on the door gave a disclaimer for ADULT CONTENT. And boy was there. I’m talking full frontal nudity.

T.I. says you can have whatever you like... well, how would you like two free tickets to go see T.I. and Young Jeezy when they come to Bojangles Coliseum on Thursday, Feb. 26?

The first person to e-mail me at Brittney.cason@creativeloafing.com that tells me T.I’s real name wins them. And chances are if you don't e-mail early on Wednesday afternoon, you won't win... No need to flood my e-mail. :)

But for all your slow pokes, the concert isn’t sold out… and this is your last chance to see T.I. before he goes to Yale, I mean, jail. You can get tickets here.

My friend, Vittoria, from Chicago was in town this past weekend, so I took her to Bartender’s Ball... and in describing it to her I said, “Remember the scene in Willy Wonka and the Chocolate Factory when they walk into the factory to a magical chocolate wonderland? Well, kinda like that, but with alcohol.”

Because a ticket to Bartender’s Ball is the golden ticket. Just about every bar in Charlotte sets up a bar booth in the Blake for a nightlife convention that is one massive adult prom where all the punch is spiked.

I ended up in a dinosaur costume — for some reason Loft 1523 had a dinosaur mascot. That is just one example of the shenanigans that goes down at Charlotte’s biggest party.

Valentine’s Day, other wise known as the “Hallmark and other fine retailers make a profit day,” is more of a holiday for the economy than anything else. For couples, it’s an excuse to go out to eat, exchange presents and have sex. But for single people, it’s the best night to go out — especially for guys looking to get laid. What?... I’m just being honest. It weeds out all those in a relationship so it’s a free-for-all — and a solid opportunity to meet other single people.

If you don’t want a prefix three course meal at an expensive steak house when you don’t even eat meat, well don’t worry because there is plenty to do otherwise.

I present to you the “Fuck Valentine’s Day” party menu...

QC After Dark / News Break out the Bikinis!

When I first heard about Bikinis in University opening my first thought was: “That sounds like a place I want to go”... if we were in Myrtle Beach for Spring Break or something. But since we’re not, I sent my intern, Sarah from UNCC, to check out the booby bar, breast-eraunt.

Living the life of a college student means spending my week with dead poets and ex-world leaders. Beginning to feel a little dead myself, I was relieved for the weekend to roll around so I could breathe a little life into my nights. So, I opted to check out the new Bikinis I’d been hearing about on campus. 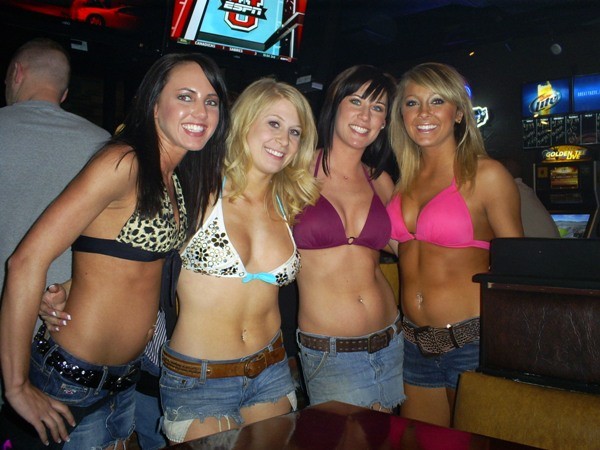 After-all, anything has to be better than Bar Charlotte, a place known for its barely legal booty and the guys trying to get it. Well, the guys were still trying to get at the booty at Bikinis.

With all these home foreclosures goes HOM – causing Liv, Play and Feast to close.

But was it the economy, Hurricane Funderfurk, the EpiCentre opening... or is that location just cursed? That whole block seems to be capitalistically cursed. I’ve only lived in Charlotte for three years and the various venues have been several different things. Twist... Daddy’s... Menage... HOM.

I’m telling you, someone needs to put a late night diner in that location. If only Feast were a Waffle House and served shittier food, as in greasy diner food that people want to at 2 a.m.

Stay tuned because I’m putting together an Economic Stimulus Nightlife Package…. we’re all ballin’ on a budget these days.

QC After Dark / News Checking out bars without checking in

According to Jay-Z, “after the party it’s the hotel lobby” ... or, you can just have the party at the hotel bar. Because you don’t have to be checked-in to check out the nightlife within hotels.

There’s Café Sienna at the Holiday Inn, Chambers in the Crowne Plaza, Champions and Cutter’s Cigar Bar in Marriot Center City, Bar 10 at the Westin, Coastal Bar at Hilton Center City and the more appropriately titled Lakefront Lounge at the University Hilton ... and if you’re staying at the Days Inn on Woodlawn you can go to the Azteca restaurant for a little fiesta fiesta.

But a new hotel just opened that might house the most eclectically modern bar in Charlotte... the WXYZ at the Aloft — a hotel, as opposed to a loft, located above the EpiCentre. 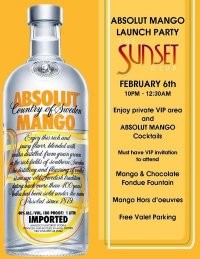 You remember the character Mango from SNL? Yeah, that guy was funny… but he has absolutely nothing to do with what the launch of the new Absolut Mango vodka this Friday night at Sunset Club starting at 10 p.m. Before we know it there is going to be more flavors of vodka than there are ice cream.

I got to try Absolut Mango at Sundance Film Festival where the bartender, who claimed to be a founding member of the Coyotes, mixed it with pomegranate juice and ice tea... and it was absolutely delicious. And if the new mango flavor of vodka isn’t enough – they’re having a chocolate fountain. More than likely that’s where you’ll find me.

Well, I have V.I.P tickets for the open bar from 10 p.m. – 12:30 a.m.…. and I want to share them. I have two pair of passes and they go to the first two people to e-mail me at brittney.cason@creativeloafing.com