Normally I would complain about having to spend Valentine’s Day in Austin, Texas, with the likes of Tucker Max. But considering he's helping me prepare my book for publishing, it's the best Valentine's ever.

Friday night I was sitting alone at a coffee shop/bar in downtown Austin, drinking a spiked coffee while entrenched in the edits Tucker assigned me, when a guy plopped down in the extra chair at my table. In a deep English accent he introduced himself, “I'm Eddie, what’s your name?”

I peered over my computer screen, “Ummmm … Brittney.”

"What are you working on?" he asked.

My train of thought was completely ruined, and I was irritated that he'd so boldly interrupted me. What do you want, dude? I'm just working on the biggest project of my life and have five minutes to finish it. I'm not busy or anything.

But I tried to be friendly and threw some closed-ended answers at him: “Some writings.”

He sat there for five minutes asking random questions that I responded to with one-word answers. Soon, a buzzer goes off — I assumed it was coming from the noisy downtown streets beyond the open doors 10 feet from me.

“OK, nice to meet you,” he said, getting up from the chair he invited himself to sit down in.

“Oooo… K then, you too,” I responded, rolling my eyes at him as he turns around to sit at another table where another girl sat alone. Maybe she'll want to talk to you — weirdo.

The chair still warm from Eddie's ass, another guy moseyed on up and copped a squat. What is up with the guys in Austin? Is this standard procedure down here? The place is packed so maybe he just needs a seat. But he didn't even have ask. Chivalry is an endangered species, I swear.

“So … tell me about yourself.”

“I’m a writer. Currently working ... as we speak. But feel free to use that chair."

I put my head down and just keep writing, ignoring his existence all together.

“So what are you working on?"

Beyond frustrated at that point, I just quip, “Homework,” and proceed to keep typing.

“So I guess you’re busy.” Perceptive one you are.

After a few minutes of Jim just sitting there staring at me type, that same buzzing noise goes off again and he got up without saying a word. Good riddance.

Now completely distracted and stress level increased, I went to refill my coffee. When I come back, ANOTHER guy is sitting at my table. Tucker must be playing a prank on me or something, I conclude.

“What, just walked up and sit at some strange girl's table while she’s working?” 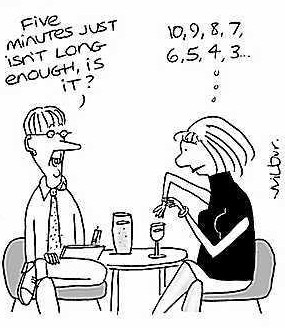 Now he was the one confused. “Yes, this is Austin’s Single Mingle Valentine’s speed dating!” he explained.

“Oh … well, I didn’t get the memo.” Or see the sign on the door apparently. Or realize that was what the buzzer was. Makes sense now though.

I shut my laptop and sped the hell out of there. If I knew I was going to be speed dating, I at least would have worn makeup!

Speaking of Valentine’s Day in Austin, I got a Groupon for a $5 Vejazzle with a Brazilian Wax. I made an appointment … to be continued.

In the meantime, if you want to go Speed Dating in Charlotte (on purpose) here's how ... warning to anyone that hangs out at Crave Dessert Bar and Fox and the Hound in Birkdale.