Interviews The stages of Lisa Ann 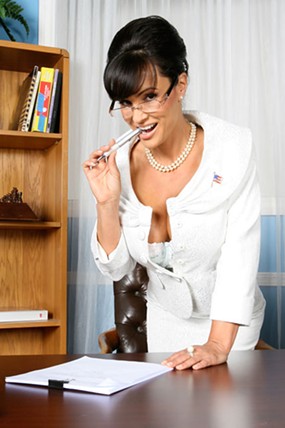 You started stripping in Pennsylvania at 16-years-old with a fake ID. At that age, what did you spend all your tips on?
Just living. I was on my own at a young age so it was really just survival.

Did you hook up with any Amish guys with huge neck beards?
No. They didn't come into the club.


At 18, you started dancing at Al's Diamond Cabaret in Reading Pennsylvania - a frequent stop on the feature dancing circuit. Which if any of the adult stars who appeared at your club had the biggest influence on your career?
All the girls back then were really helpful and took time to answer my questions, like Teri Weigel. But Leena (La Bianca) really helped me the most. She was very popular in the 1990s. She gave me some really good contacts. She wrote to me through the mail and kept in touch. She introduced me to a wonderful man in LA named Peter Davy who helped girls get into the business. He picked me up at the airport and drove me around to meet everyone. He was really a great, great help.

You're writing a book based on journals you've kept since starting in the industry. Have you noticed a difference in your attitudes, or your goals, from when you started to now?
No. The industry has changed so much that I have changed with it. Years ago we would shoot one movie a month on film. It took four months to come out on VHS. You took that one movie with that one poster on the road with you. The volume wasn't there. Now you have to be thinking about things like: Who still buys DVDs? Who is an internet-based consumer? Who might be just a Naughty America subscriber? You can no longer shoot just one movie a month to keep a strong brand.

It has changed so much for me, but it has been a very interesting path. I find that my base was always dancing because that's how I got into the business. Now, not as many of the girls are on the road dancing like I am. I think when you meet your fans in person you develop a bond with them for life. We also have so many more opportunities to meet fans, especially with all the trade shows like the AVNs, Exxxotica and NightMoves.

Being on the road 40 to 45 weekends a year, how much of your income comes from feature appearances as opposed to shooting scenes? Do you think shooting scenes has become more of a way to advertise to get fans to come to your shows?
I do well shooting because my brand is strong. Producers tell me really flattering things like, if they put me on a box cover of a movie, the movie does really well. But, I just do what I do because I like it. Believe it or not, I would make more money if I wasn't on the road all the time.

Do you think you'll ever tire of feature dancing as Sarah Palin or to Eminem's, "We Made You"?
I don't think I will because it is such a big memory to me. Every time I hear that song I think of A.) How incredible it was that I played Sarah Palin and it got such a huge response, and B.) How much of an honor it was to be on set and do a music video with someone as incredible as Eminem.

Do you have a lot of overzealous fans that try to get too close?
Yeah. That's one of the reasons I have security with me wherever I go. People feel very comfortable with me, which I understand. These guys have had a very unique experience with us even though they've never met us. So I understand why, when they meet me, they feel like they know me so well. I have to remind them that I don't know them, and that they are kind of freaking me out.

What I've noticed more with the new generation of fans is that if you don't do what they want you to do, they can get very nasty. I was just in the middle of having my contacts transferred to my new phone in a T-Mobile store and this guy wanted a photo. I was like, "Dude, I'm busy right now. Let me just do this first." He went nuts on me. He was like, "Fuck you, you fucking cunt. I don't want a fucking picture of you anyway." They had to remove him from the store. Then everyone in the store was just staring at me. I left with half of my contacts transferred because it was too awkward. I don't remember things like that ever happening 10 years ago.

Is it true you bring extra toothbrushes to set for your co-stars?
I don't have to anymore because everyone knows now.

After you received the media storm of attention for Who's Nailin' Paylin, did you have to actively keep up with current events in order to give an educated response to all the political questions you were receiving?
I just watch the news every day. I read the paper. I am one of those people who knows what's going on.

To read more of Shawn Alff's writing, visit CL's sister paper in Tampa. You can also reach him on Twitter, Facebook and Instagram, or email him here.