Tavern on Park After Dark | Brittney Cason After Dark
Switch to the mobile version of this page.

I went to Tavern on Park for lunch the other day and the first thing the hostess said as she walked us to our patio table was, “you should come back at night, it’s so pretty out here.” And by out here she was referring to Park Town Village Shopping Center where lights drape atop two stories of patios where bands, such as The Dempsey Gibson Band play (and will be playing again on May 1 and 2, might I add).

Tavern on Park is a restaurant fancier than the price. When I walked in, it felt as though I had entered a fancy restaurant in South Park, even the patio has fans and wooden benches cushioned with decorative pillows. I had a delectable little sandwich and salad with a fancy plate presentation and friendly service ... for the same price as the Market Fresh chicken salad I got from Arby’s last week.

Between Tavern on Park, Duckworth’s Cheese Steakery, Hef’s, Marble Slab, Jason’s Deli and WAM (what Mama Fu’s mysteriously transformed into overnight), Parktown Village Shopping Center is like the EpiCentre of Dilworth and Myer’s Park ... for food. But at night, Tavern on Park turns into Tavern on Park After Dark. While I was in Boston, I sent my newest intern, Tiffany, there to see Simplified. So, everyone meet Tiffany ... Tiffany, Everyone – Everyone, Tiffany. (But don’t worry, Sarah’s not going anywhere)

Old men dirty dancing to Reggae and cougars on the prowl were among the many at Tavern on Park After Dark, last Friday.

I went there to see Simplified, whom I’d heard so much about — great band, by the way — but I was disappointed when, in the first five minutes, a fuse was blown ... but that didn’t blow the night. 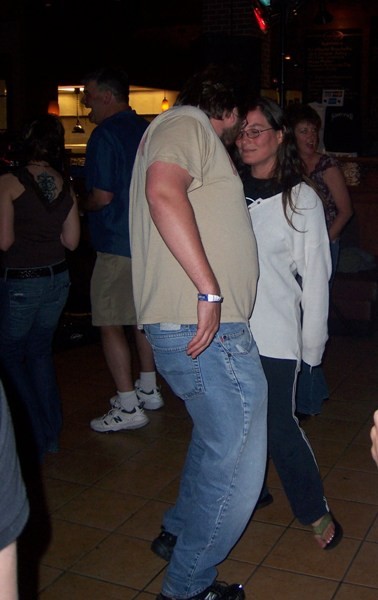 Tavern on Park After Dark could use some work preparing for bigger crowds — granted, Simplified draws a big crowd, but drinks were served in 20-minute increments while guitars and drums motivated dancers to take the floor. As the night went on, the once empty dance floor filled up. A drunken girl couldn’t stop swooshing her hair back and forth. I was sure she would soon get sick from all the swaying, but surprisingly, she held her own.

I have to say, Simplified did a great job at distracting me from the slow service. Another thing that helped was the fact the server did not keep track of my consumption and I was charged for only three of my five drinks. Now that’s what I call a special.

Speaking of specials, the Tavern had a $2 special on bottled Miller and Bud Lite and my three (wink, wink) cranberry and vodkas were only $4.75 a piece. They also have Taverntinis, everything from chocolate to sweet tea to blue cheese martinis.

While outside smoking, a friend of mine met a couple who drove from Columbia, S.C., to see the local band perform. These Simplified fans trucked about an hour-and-a-half to see them, but were not allowed to enter. Due to the lack of advertising an age limit, they were not aware you had to be 21 in order to be admitted into the restaurant. Despite the mandatory wrist band dress code, they couldn’t opt out and be labeled as under age. That sucks ...

I would definitely go back to Tavern on Park as it’s a great alternative to Uptown, and May 9 would be a great time because R&B singer Chris Cook will be performing. If I make it to the show, I hope I get the same server — I like the way he counts.

Also, for the underage couple who was prohibited to go to the Simplified show at Tavern on Park, on May 13 at 6:30 p.m on the corner of Mint and 3rd, Simplified with be opening up for O.A.R. Not only is it an all ages show, but it’s free, bitches!

Latest in Brittney Cason After Dark