12 of the region's hottest music festivals 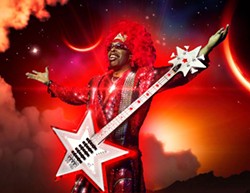 Ah, warmer weather. Everyone's ready to get out of the house, soak up some rays and listen to good music. These days, it looks like there's nearly a festival every weekend and each year, the lineups continue to get stronger. From local one-day events to four-day fests that require camping out, you can easily find something worth traveling to — whether it's the bluegrass of MerleFest or the variety of Bonnaroo. Here's a guide to the region's best events:

OUR THOUGHTS: Shakori Hills' billing as a grassroots festival is accurate, in as much as the acts spread across four days and four stages are specialists in one form of roots music or another. Yet, "roots" here is far more contemporary than traditional, encompassing the lush, folk-inflected confessionals of Indigo Girls; the high, lonesome, gospel-haunted bluegrass of the Del McCoury Band; the zydeco-reggae-Cajun-country mish-mash of Donna the Buffalo; and the Crescent City funk 'n swing of The Dirty Dozen Brass Band. Look past the established acts, and keep your ears pricked for up-and-comers like the mountain hoe-down-by-way-of-West Africa sister act Rising Appalachia. (Pat Moran)

OUR THOUGHTS: The second annual festival celebrates the outdoor lifestyle through a bunch of events and music. Outdoorsy types can get their fill of competing before relaxing along the rapids and soaking in the variety of music. From the acousti-funk of G. Love, the soulful style of Sister Sparrow and plenty of jam-filled bluegrass, it's a laid-back variety that will make for a fantastic (close-by) weekend outdoors. (Jeff Hahne)

ALSO: Conferences during the day

OUR THOUGHTS: Whatever ugliness went on behind the scenes that resulted in Moogfest parting ways with AC Entertainment, host to the first three late-fall events, the festival in honor of Bob Moog has re-emerged in the spring with an aesthetic and lineup more in keeping with the innovator's vision. Iconic synth acts from across the spectrum and various eras — the Pet Shop Boys, Kraftwerk, Flying Lotus, Dan Deacon, M.I.A. and Moderat among them — highlight the evenings' entertainments, while a heavyweight roster of daytime panelists and presenters include the Warp Records brain trust, Laurie Anderson, Deerhunter's Bradford Cox, Futurama creator David X. Cohen, members of Google's creative team, TONTO creator Malcolm Cecil (who won a Grammy working on Stevie Wonder's '70s LPs), Black Rock Coalition co-founder Greg Tate and dozens of other key names in the electronic music world and environs. Having taken a turn toward more pedestrian festivals, Moogfest's focus is back squarely on the innovators, where it should be. (John Schacht)

OUR THOUGHTS: Raleigh's Hopscotch and Asheville's Moogfest have grabbed national attention in recent years, but MerleFest — held annually on the campus of Wilkes Community College — has long dazzled Tar Heels and interlopers alike with a litany of folk and rock luminaries. Modern country megastar Allen Jackson, banjo master Ralph Stanley, old-time ambassadors Carolina Chocolate Drops, and mainstream bluegrass champions Steep Canyon Rangers highlight the 2014 lineup, which has the goods to please seemingly any roots music itch. But don't sleep on the acts further down the bill: Carrboro's Mandolin Orange, for instance, is as nuanced and potent as any folk outfit you'll find in this state. (Jordan Lawrence)

OUR THOUGHTS: Let's assume the weather will be nice and organizers will avoid the frustration of last year's rained-out Sunday clusterfuck. If you like your rock heavy, manly and with lots of chugging riffs, this would be the place for you — there'll be plenty of it for two days. There's not one female in the lineup, so this dude-fest will feature plenty of testosterone-fueled aggression on the stage and in the pits. Motörhead has dropped off the lineup (replaced by Anthrax) and people are still scratching their heads at the inclusion of 311, but live performances by Rob Zombie and Kid Rock are worth checking out. Even if their music isn't your cup of tea, those guys put on a hell of a show. (Hahne)

OUR THOUGHTS: If you're anything like me, you, uh, don't make a lot of money. So summer festivals, then, become matters of economics — the higher the sunk cost, the richer the return on investment must be. The three-day Shaky Knees Festival in Atlanta offers such rewards: It's relatively inexpensive — a full three-day pass runs just $169 (early-bird festival passes are even cheaper at $99) — and its daily lineups are packed from head to toe with marquee names you'd be paying a premium to see anyway. Between Spoon, The National, Charles Bradley and Foals, you're making your money's worth on Friday alone. Throw in big-name reunion acts The Violent Femmes and The Replacements and you're playing with house money. (Patrick Wall)

OUR THOUGHTS: The region's reigning rhythmic fundraiser for cancer-fighting organizations gets a shake-up as it enters its eighth year. Jam-banders like Railroad Earth are still on hand, and a continuous drum circle remains at the heart of the Weddington festival. Yet this year, Drumstrong rocks up the joint while retaining its acoustic Americana and bluegrass cred. Dylan and The Band's spiritual descendants The Felice Brothers share stages with ramshackle roots 'n rollers American Aquarium, horn-and-strings-infused popsters Kopecky Family Band and Carolina Chocolate Drops founder Dom Flemons. The wider musical net had also pulled in alt rockers like HRVRD – further proof that this ain't your daddy's Drumstrong. (Moran)

OUR THOUGHTS: Making its debut in 2014, the Blackstock Music Festival seems to be seeking some of that Bonnaroo magic in the heart of the S.C. Midlands. The top-line acts — Galactic, Papadosio, Leftover Salmon — drift in directions that range from folk-y to psychedelic, but they all specialize in exhaustive displays that should delight jam-band devotees looking for one more spot to pitch their tent. But there's some diversity here, as well: Folk-pop lifer Mason Jennings brings his wry and witty hooks to bear, and Durham's Hiss Golden Messenger pose probing spiritual questions while dissolving influences from raga to bluegrass into one blissfully confused melting pot. (Lawrence)

OUR THOUGHTS: This is continually one of the nation's best festivals. Four days of music featuring some of the biggest and brightest bands around, playing full sets until the wee hours of the morning. The superjams alone provide for once-in-a-lifetime musical experiences, but the camaraderie and talent abound on stage and off. If you were going to go to one big festival in your lifetime, this is about as good as it gets. (Hahne)

OUR THOUGHTS: A quarter-century in, Chapel Hill's little indie label that could stands as both a model of Net-conscious savvy today and a throwback to what record labels were meant to be — home to a couple of popular money makers that bankroll a roster of lesser-known eclectic artists, regional heroes and promising up-and-coming acts. Naturally, the four-day festival's stellar lineup mirrors the label's sonic diversity, highlighted by Lambchop performing Nixon at Duke University Wednesday; label founders Superchunk, the Rock*A*Teens and pastoral Brit rockers the Clientele Thursday at Cat's Cradle; Destroyer, Wye Oak and The Mountain Goats Friday at Cat's Cradle, and a big outdoor Carrboro shindig Saturday featuring a full-band reunion of Neutral Milk Hotel, a resurgent Bob Mould, Caribou, Ex Hex and the Love Language. If Merge 20 was any yardstick, there'll be transcendent moments aplenty here. (Schacht)

OUR THOUGHTS: The unpleasant part of camping at festivals — OK, one of them — is often the view. At Burning Man, all you see is desert. At Bonnaroo, all you see is a teeming mass of humanity, or, worse, Tennessee. FloydFest, at least, carries the fringe benefit of being nestled in the gorgeous Blue Ridge Mountains in Virginia, so you'll have a pretty great view while you decompress between festival days. Then again, you're not going for the camping, you're going for the music, right? FloydFest offers plenty in that regard, too: The lineup, not surprisingly, leans toward roots and mountain music — Ben Harper! Underhill Rose! Carolina Chocolate Drops! — but rolls in plenty of funk (Lettuce), reggae (Ziggy Marley), electronic music (Thievery Corporation, Conspirator) and world flavors (Incendio, Groundation) to carry an incredibly broad appeal. Oh, and the divine Lauryn Hill is headlining. Lauryn Hill in the Blue Ridge? Yes, please. (Wall)