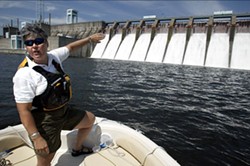 Donna Lisenby is smack in the middle of her 15 minutes of fame. ABC's Nightline is on route to her South Charlotte office, local TV and print journalists are scrambling for interviews, and Lisenby's voice is already hoarse from re-telling her struggle with Wal-Mart, featured in Robert Greenwald's new documentary, Wal-Mart: The High Cost of Low Prices.

UNC Charlotte will hold a screening of the film Wednesday, Nov. 16, at 6pm in Storrs Building, room 110. It will be followed by a discussion among professors and others. Seven more screenings were scheduled for other spots in the Charlotte area this week.

One will be held by a private citizen, Melvin Jewitt, who stumbled onto the documentary while angrily Googling "Wal-Mart Sucks" one day. Jewitt developed a disdain for the company after hearing his father complain that the South Carolina textile mill he works for was laying off employees because Wal-Mart had stopped ordering from the mill. "It's frustrating," Jewitt says. "People in my father's community shop at Wal-Mart even though they are responsible for all the jobs being lost in the town."

Greenwald's film follows a pattern: First it gives Wal-Mart's public positions, taken from commercials or speeches, on issues such as employee welfare, the company's impact on local economies and its dedication to the environment. Then, the film counters the company's claims by presenting personal testimonies from people who have been negatively affected by Wal-Mart. Each segment concludes with facts or statistics running across the screen.

In Lisenby's segment, she tells of Wal-Mart's environmental neglect, recounting her efforts as Catawba Riverkeeper to try and get the company to remove bags of lawn products containing toxic chemicals from its parking lots. Many of the bags were broken, and when it rained the chemicals leaked into the Catawba River -- the drinking-water source for two million people.

Wal-Mart, of course, gave Lisenby the brush-off until she contacted a local TV news station. The day after the story aired, all seven Catawba-area stores removed the lawn products from their parking lots. That's all the national news will probably care about. But to Lisenby, a real-life Lorax, it was just one battle in a long history of environmental fights.

At 25, Lisenby began managing a 200-year-old farm in Chester County, South Carolina. Before long, she realized the traditional farming system she had learned in college needed an overhaul. Seeking a more holistic approach, she turned to organic produce, hormone-free beef and free-range chickens. She even created a bed-and-breakfast that encouraged patrons to help with the farming so they could better connect with the land.

Then the fights began. A tire-burning company tried to buy an old school in Lisenby's hometown of Lando, SC, to store its incinerated rubber. Lisenby held cakewalks and barbecues, and raised enough money to convert the school into a senior center and head-start program. In Chester County, Lisenby stopped an oil company from running toxic waste beneath local buildings, and kept a chicken farm factory from setting up shop. In 1998, she landed her job as riverkeeper of the Catawba. It would take several pages to list her accomplishments of the past seven years. Most recently, she stopped Duke Power from developing valued riverfront land into property for private mansions.

Big corporations like Duke and Wal-Mart, Lisenby says, "usually do whatever is in their best interest and won't stop until someone stands in their way." Before seeing Greenwald's film, Lisenby says, she still shopped at Wal-Mart. In her mind, she was rewarding the local managers of the superstore who complied with her request to clean up the parking lots. But after seeing how the corporation robs its employees and cripples local businesses, Lisenby has bought her last roll of Charmin at Wal-Mart.

In fact, Lisenby spearheaded the campaign to show Wal-Mart: The High Cost of Low Prices to as many Charlotteans as possible. Greenwald has adopted a grassroots method of distributing the film. Anyone can purchase it from his web site for $12.95 and all are encouraged to register screenings so others can see it. Lisenby understands the challenges she faces reaching a diverse audience in Charlotte. "This is a conservative, business-friendly city," she says. "Many people will probably turn a cold shoulder."