A place not usually in the business of giving bad news left some visitors in tears Wednesday morning.

Between about 11:30 a.m. and noon, three local same-sex couples — Scott Bishop and his partner Ron Sperry, the Revs. Robin Tanner and Ann Marie Alderman, and Joey Hewell and Scott Lindsley — requested marriage licenses from the Mecklenburg County Register of Deeds. All three requests were denied. 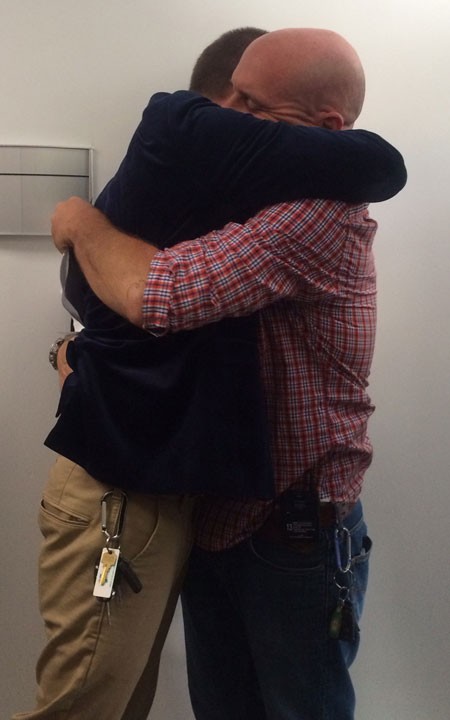 Not many of the couples, nor their family and friends who came in support, anticipated different results. But the outcome wasn't really the point. The couples were protesting a constitutional amendment that prohibits North Carolina from recognizing or performing same-sex marriages or civil unions. Same-sex marriage hadn't been recognized before Amendment One passed last May. Writing the law into the constitution just made it that much more difficult to overturn in the future.

Organized by the Asheville-based Campaign for Southern Equality, the protest follows similar demonstrations at marriage-license granters across the country, some of whom have granted licenses to gay couples despite anti-same sex marriage laws in their states. Using the U.S. Supreme Court's recent ruling that struck down several provisions of the Defense of Marriage Act as a loophole, a register of wills in Pennsylvania began issuing marriage licenses to same-sex couples in July. But Bruce Hanes, an attorney, was afforded some flexibility; the Pennsylvania Marriage Act isn't written into the state's constitution.

The couples in Charlotte were hoping they'd find an equally creative government employee.

As news cameras clicked away, Tanner and Alderman approached the Mecklenburg County clerk and requested a license. The clerk asked for their IDs and then told them that because the state doesn't recognize same-sex unions, she was not able to grant them a license.

"We understand that this is the law as it is today, and we hope that someday people like yourself will be able to be in a position to either resist that unjust law or see a day when we're able to return when you're able to sign this application for us," Tanner told the clerk.

The Campaign for Southern Equality's executive director the Rev. Jasmine Beach-Ferrara led the couples in prayer before the protest, led them into the Mecklenburg County government building, and then gave them hugs as they were turned away. In the past two years the group has encouraged 90 couples across the South — from Mississippi to North Carolina — to stage similar protests in their hometowns. They kicked off North Carolina protests Aug. 21 in Madison County and have since gone to Forsyth, Guilford and Henderson. None have granted same-sex couples marriage licenses. After Mecklenburg, the group will visit Buncombe, Transylvania, Cabarrus and Rowan counties. 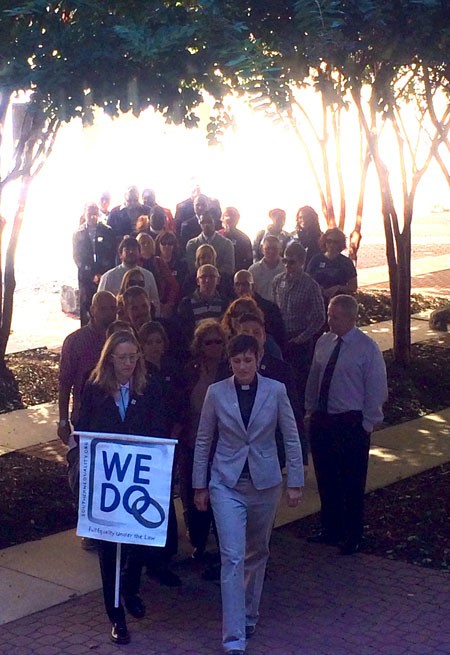 City Councilmembers John Autry and LaWana Mayfield trailed behind the group as it made its way into the government building. Autry said he was there to support his daughter, who lives in California and had struggled with Proposition 8, the state constitutional amendment that banned same-sex marriage until this year. She and her partner have a 17-year-old son.

"We must be persistent, consistent and concise with our message, and change will come," Autry said.

He was empathetic toward the clerk who denied the couples licenses.

"When someone has a livelihood they're dependent on ... there's no telling what the ramifications might be," of granting a license to same-sex couples, he said. But he wasn't as forgiving toward the law that prohibited her from signing the forms. "This speaks to the duplicity that we're faced with in North Carolina: Come to North Carolina, fulfill your dreams here, have a family — unless."

Many of the couples said they'd continue to request a marriage license until they were given one, legally or not.

"We want all the rights and benefits everyone else can have," Beach-Ferrara said.

Tanner and Alderman speak to the clerk after she denied them a license. "When someone has a livelihood they're dependent on ... there's no telling what the ramifications might be," of granting a license to same-sex couples, Autry said.
(Video by Ana McKenzie)