A Blueprint For Cooking 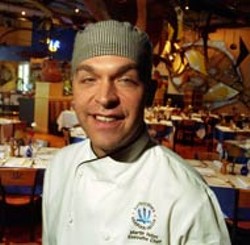 Long hours in the kitchen and at the restaurant can leave a chef with little time to think about his own meals.

Take, for example, Martin Heller, Executive Chef and General Manager of LaVecchia's Seafood Grille. Heller begins every day with a bowl of cereal. "I usually mix two or three cereals together," he reveals. "That is definitely the chef coming out in me."

That's not exactly a recipe one would find in The Joy of Cooking, the cuisine book that Heller insists should be owned by everyone who is "an aspiring chef, in the cooking industry, or just likes to cook, because it has all the basics." Still, the cereal concoction is the first of many meals he prepares in a day.

Originally from Asheville, Heller's interest in the restaurant business began at 19 while working with his uncle. Because his uncle specifically focused on the layout and design of restaurants, Heller thought this may be the route for him, but he learned that his passion was in the kitchen, not at a desk.

"I went with him on one of his routes to all of the restaurants, and in the process of doing that, I came to the conclusion that I didn't like sitting down and doing the drafting," explains Heller. "But I wanted to do something with it. I saw the artistic part of the culinary field, and it seemed exciting. Plus, I knew I could move around from place to place."

Heller's conclusion led him to culinary school at Buncombe Community College in Asheville, where he spent the next three years honing his craft. During that time, he completed two internships, including in the Lake Toxaway area and The Market Place. After graduating from culinary school, Heller continued on at the Market Place for almost two years learning different aspects of the kitchen.

"I started out doing prep work for the night shift, helping with the vegetable station, appetizers, soups, on the grill and with desserts."

After feeling like he had learned all he could at The Market Place, Heller decided to take a position in Marietta, Georgia, at the fine dining establishment 1848 House.

"I worked my way through that restaurant the same way I had worked at the Market Place, until it got to the point where I didn't have anything else to do but be one of the sous chefs or the head chef. So I decided to go ahead and move on, because that wasn't going to happen there at the time."

Heller then moved back to Asheville and instead of going back into fine dining, opted this time for the management side of the business. Through a friend, he got into management training through the Outback Steakhouse Corporation and spent over the next two years managing and opening Outback Steakhouses and Carrabba's.

"In the corporate environment, the structure is a lot different. You have to be consistent and abide by the corporate manual, but it was a good experience. But as far as the food part of it, it wasn't quite as challenging."

Through this venture, Heller met Nick LaVecchia. "He caught wind that I had gone into culinary school, and at that time he knew that he was going to be opening up a restaurant in the future and said he would contact me."

Six years later, Heller's management skills coupled with his culinary talent have helped him be successful. And as advice to aspiring young chefs, he offers, "Mostly, I would say just always be open to suggestions, try not to burn any bridges, and learn something from everybody."