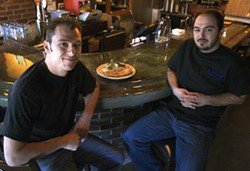 In Charlotte, we talk about neighborhood, districts and subdivisions the same way some cities refer to their zip codes. Real estate developers are creating new "neighborhoods" at the far edges of the city, even into the adjoining counties, complete with shopping centers with the prerequisite chain coffee shop, chain bookstore, chain restaurants and chain drugstore. The neighborhoods that ring the center city, however, have developed organically and with character, albeit quirky. These neighborhoods sport establishments that become part of their definition.

One such low-lit kind of eatery patrons immediately warm to is the 49-seat Intermezzo Pizzeria and Café at five points on the cusp of Plaza Midwood. Intermezzo, which opened in July 2007, is anything but another neighborhood corner bar, even if it is on a corner. Local designer Boris Tomic deftly exorcised former inhabitants, most recently Honest Pat's, and integrated exposed brick walls and overhead beams into a décor that is unexpectedly restful and more comfortable than expected. The bar arches away from a wall lined with booths, and an elevated dining alcove provides drama. The patio, soon to have heat lamps, offers a spectacular view of the Charlotte skyline.

Intermezzo is the result of an extensive 18-month renovation by co-owners and brothers Djordje and Branko Avramovic, natives of Valjevo, Serbia. They came to Charlotte a decade ago and worked for family friends and fellow Serbians Vlado and Sladjana Novakovic at Nova's Bakery, then located in South End. Soon thereafter, they both worked at Cosmos Café downtown.

With the opening of Intermezzo, and with Nova's Bakery and the Bosnian Market just up the street, Charlotte has given center to the Balkan community in Plaza Midwood.

At first glance, the clientele at Intermezzo suggests a watering hole, but the kitchen is serious about food and so are the patrons, once platters swing through the smoke-free dining room. Happily, Intermezzo is so much more than the pizzeria proclaimed in its name. In fact, what makes this charming eatery such an exceptional place is the combination of Serbian specialties with the dishes demanded by Charlotteans' preference for Italian mainstays. The menu was created, in part, from the brothers' grandmother's recipes -- she owned a café in Valjevo. The kitchen and these dishes come to life through the capable hands of Dobrila Avramovic, the owners' mother, whose focused Serbian comfort foods erupt with intense flavors.

Sure, you could have pasta dishes or lasagna or a grilled chicken breast sandwich. But why would you when you could have pljeskavica, which tastes so much better than it sounds. This is one of Serbia's national dishes: a gigantic wood-grilled hamburger, flavored like gyro meat, dotted with grilled onions and nestled into a just baked somun, a marvelous pitaesque type flat bread with a chewy texture. The sandwich is slathered with ajvar, a boisterous roasted red peppers, eggplant and chile mixture. Ajvar also makes a clever foil to the cevapi: small, wood-grilled minced beef and lamb sausages pressed into another house-made flat bread. Among the salads, the simplest is the best: a heap of cubed cucumbers, refreshingly ripe tomatoes, bell peppers and onions scattered with grated feta cheese in a tangy vinaigrette. But the table fell into a silent harmony with the kitchen's strongest note, the lusty burek, similar to a Turkish Börek, a crusty coil of minced beef stuffed phyllo. This house-made phyllo is more pliable than the crispy Greek phyllo associated with baklava and found in the freezer section of local grocery stores.

If the notion of Balkan treats send you scurrying for pizza, there are the predictable pizzas, available in 10 and 16 inches, on the menu. You will find a four cheese and Margherita, even a breakfast pizza with bacon, ham, eggs, mushrooms and house-made mozzarella. These pizzas, though, taste anything but predictable. Each has a wondrously tender, supple crust with top-notch ingredients, such as the Spinach Supreme, which walks the traditional line in elegant simplicity and balance.

The wine list at Intermezzo is short and affordable, some offered by the glass, while the beer list includes Nikšicko, a Serbian beer and the Croatian beer Karlovacko. Unfortunately none of the renowned Serbian brandies made the list. Djordje Avramovic said that North Carolina ABC has not approved the small artisanal brandies -- those made in small batches and aged in wooden barrels. Instead, the Serbian brandies available are the less appealing commercial brands.

The menu is served all day; however, lunch attracts a distinctly different clientele: uniformed national guardsmen, business lunchers, neighborhood workers. The pace of the meal may be slow, which might be somewhat annoying at lunch when an hour really is an hour. Then again, the bread is being baked to order and quality takes time. And that's the beauty of Intermezzo, a perfect fit for the neighborhood.

Have a restaurant tip, compliment, complaint? Do you know of a restaurant that has opened, closed, or should be reviewed? Does your restaurant or shop have news, menu changes, new additions to staff or building, upcoming cuisine or wine events? Note: We need events at least 12 days in advance. Fax information to Eaters' Digest: 704-944-3605, or leave voice mail: 704-522-8334, ext. 136.

Speaking of 3.00000, Intermezzo Pizzeria And Cafe