A Look Back at the Never-Ending Battle and its Heroes

I write this as a man who has traveled through time, and I'm feeling a little jet-lagged for someone who didn't leave his desk the entire trip.

I've spent the last three weeks poring over Creative Loafing's archives, from that godawful first cover with the unrecognizable skyline to the early aughts, when our Best of Charlotte issue coincided with news of the 9/11 attacks, souring the mood a bit.

The process has been exhaustive, staying late after finishing my normal slate of work or coming in on weekends and combing through old issues, digging for fun finds and appreciating the reporting that's long been forgotten by most of the local population. 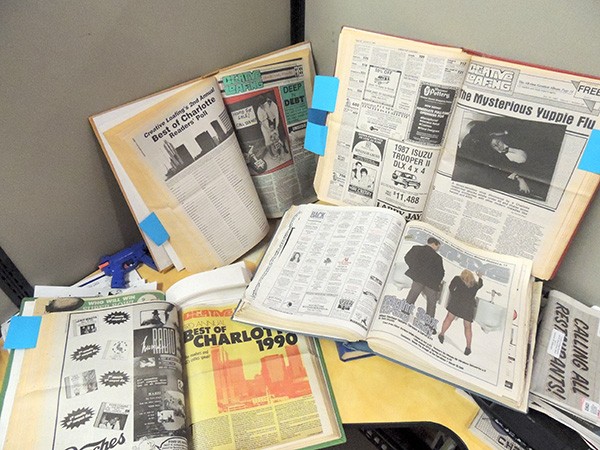 I've learned more about our city over the last month than in my first two years as news editor at the Loaf. I have half a mind to dump all these old books on the lap of any new intern and tell them to spend their first week reading through them. In an age of clickbait and headline skimming on social media, an assignment like this could serve as an invaluable lesson in the importance of context.

My curiosity has pulled me into rabbit holes regularly, oftentimes getting me lost in spaces like the Crossed Paths section of the Loafing Exchange. I still think regularly of the man who ran a personal ad through much of 1993. He had met a woman at Waffle House and said he was tired of going back there to eat in hopes of seeing her again. I truly hope she called before obesity took hold of him.

My two more-intellectual takeaways from this project involve both pride and discouragement. First off, I am more proud than ever to work with Creative Loafing after digging through the crates, becoming familiar with the voices that built this paper. Some I had worked with (Kim Lawson, Ana McKenzie, Jeff Hahne), some I had been aware of but never met (Sam Boykin, Tara Servatius, John Grooms) and some came from before my time in Charlotte. These are the folks I'm now embarrassed to say I hadn't read. Acquainting myself with their work makes me all the more thankful for this little research project. These are writers who left everything on the page for years — Jerry Klein, Vance Cariaga and Lynn Farris — and, although this column, and even this issue, wasn't big enough to fit them all in, they will always be appreciated in the Loafing annals.

I went into this issue expecting to see a progressive but antiquated point of view that would be considered as problematic now. While there was some cringe-worthy material (a music writer in the late '80s called LL Cool J "the best black rapper out right now," as if there were non-black rappers that could compare), but for the most part, I was impressed by the Loafing staff's ever-present penchant for covering issues that are only today (and only sometimes) getting attention from other outlets: trans issues, gentrification, lack of economic mobility, etc.

Grooms' coverage of homeless issues was tireless from before he even became editor, and once he did, his staff's coverage of the AIDS epidemic was heroic at a time when other media treated the issue like so many others treated the patients.

A related but more-depressing observation involved my gnawing realization that I wasn't really reading the past. The reality that history repeats itself had never been so clear. I sat at my desk feeling like Rustin Cohle riding along in a pickup truck going nowhere. Time is a flat circle. No battle is new.

I'm not so naïve as to have assumed that both sides in debates like abortion and gun control haven't been arguing circles for decades — the same points, accusations and half-truths being flung back and forth over a wall that nobody even bothers to look over anymore.

The recent return of a mainstreamed white nationalism in response to a progressive, black president put things in perspective for me, but now, reading a 1992 column blasting Jesse Helms that could have been copied and pasted into a 2015 issue blasting Pat McCrory gave me the sinking feeling that nothing will ever truly change.

Don't get me wrong, this work is still as important as ever. When I look at a 1993 "Local Zero" entry in our Best of Charlotte issue, I'm encouraged that some staff member, almost certainly Grooms, tried to warn everyone about the storm named McCrory that was building on the horizon. Alas, nobody listened, and now we're standing in the debris of HB2, waving that now prophetical issue at the clouds, cursing.

But we'll be here helping pick up the pieces and continuing to punch up, as long as people like Trump, McCrory or whatever crawls out of the swamp to replace them exist. That's my promise. For two years I've been dedicating all my time to it, and I plan to continue to do so for the foreseeable future.

As for any free time I can snag in between, you'll find me at the Waffle House, waiting. . .

More Letter From An Editor »