A Million Ways to Die in the West: How The West Was Wan | Reviews | Creative Loafing Charlotte
Switch to the mobile version of this page.

A Million Ways to Die in the West: How The West Was Wan 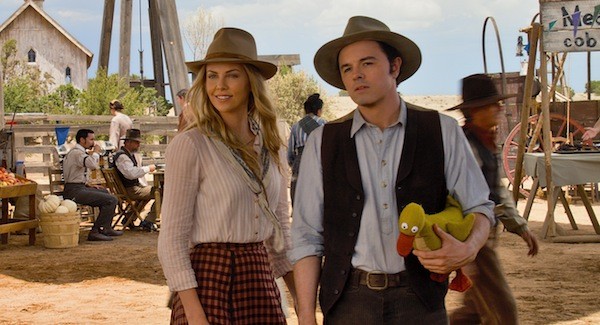 Writer-director Seth MacFarlane, he of Family Guy infamy, provided a million ways to laugh in the multiplex with the release of the hilarious 2012 blockbuster Ted, a film so popular that a sequel is inevitably heading our way next year. It's hard to imagine A Million Ways to Die in the West earning enough bank to similarly ensure a follow-up, as this fledgling franchise barely has enough worthy gags to fill out even one movie.

That's not to say MacFarlane doesn't try mighty hard in his attempts to wallop the funny bone. The filmmaker clearly hopes that his comic Western will be this generation's companion piece to Mel Brooks' 1974 classic Blazing Saddles, a picture so revered that it rests in the number 6 slot on the American Film Institute's list of the 100 funniest American movies of all time (the highest ranked of three Brooks flicks, with The Producers at number 11 and Young Frankenstein at number 13). Stay through Million Ways' end credits and you'll even witness a direct swipe of Blazing Saddles' funniest line. But while both works are packed end to end with nonstop gags, the hit-to-miss ratio is at opposite points of the spectrum, with the new picture only scoring, on average, once every 10 or so minutes.

In addition to serving as director, producer, co-scripter and co-lyricist, MacFarlane also handed himself the leading role, a disastrous decision that all but guaranteed the film had little chance of succeeding. Ted worked largely because MacFarlane stayed off-screen and only provided the voice of the talking teddy bear, leaving the heavy acting to Mark Wahlberg. By casting himself as the star in this film, MacFarlane reveals his limitations in spectacular style: A lightweight presence, he provides only stand-up shtick when a real characterization is required. As Albert, a sheep farmer who hates everything about the gritty, dangerous West, the part could have been interesting in the hands of, say, Bradley Cooper or Paul Rudd. In MacFarlane's mitts, he's nothing but a vapid quip generator, and the auteur's miscasting is only accentuated by the presence of such notable talents as Charlize Theron (natural and relaxed as a sympathetic sharpshooter) and Liam Neeson (a rare turn as a scowling villain).

As expected, the movie is crammed with crudity — no problem; so was Ted (and Blazing Saddles, for that matter). But Ted smartly allowed the raunchy material to emanate from its furry protagonist's predilections: Recall, for instance, his initial wooing of his cute co-worker at the supermarket. With Million Ways, MacFarlane is content to act like a monkey flinging its own poop at everyone in close proximity, and most of the material, unshackled from anything of import, is either stretched beyond the breaking point (the explosive diarrhea suffered by Neil Patrick Harris' supercilious dandy) or witless in the first place (a sheep urinating on Albert's face).

This isn't to say A Million Ways to Die in the West is completely devoid of working-order humor. Casting Gilbert Gottfried in the small role of Abraham Lincoln is pure demented genius — why didn't Steven Spielberg think of it? — and a pair of surprise cameos by actors revisiting former roles really do delight. And Albert's contention that the West offers nothing but death results in a few funny and/or shocking moments (ice, anyone?). But genuine laughs are few and far between; the only way this movie could work is in an edited version running 15 minutes, tops.