A tale of two vintage costume shops in Charlotte

I spot her as soon as I park my car in the dirt lot next to the run-down building housing Tommy's Pub and Backstage Vintage. She's a small woman about my mom's height, sitting on the front porch of her costume rental shop, watching the cars zip down Central Avenue. She welcomes me inside, raving about the beautiful weather this April morning.

Later, when I leave, I'll end up giving Judith Craycraft a hug — something I don't usually do after an interview.

Craycraft's costume rental shop is located on a plot of land that's slated to be developed, should DPJ Residential get its way. The local developer would like to build a 97-unit apartment complex, with commercial space on the first level, on the 1.9 acres located on Central Avenue between Landis Avenue and Nadina Street. Doing so would require Backstage Vintage and Tommy's Pub, a longtime neighborhood favorite, to either move or close altogether.

City Council will hear public comments on the rezoning petition on May 18. An online petition asking Council to reject the rezoning request had garnered almost 500 signatures by press time.

Inside Backstage Vintage — the former home of Hong Kong Vintage — I find myself dazzled by shiny things. The shopaholic within me yearns to run my hands over the sequined flapper dresses and costume jewelry, but I restrain myself as Craycraft gives me a tour. 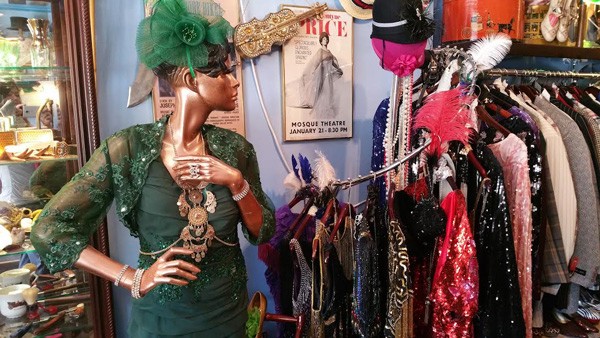 "One of our specialties is roaring '20s. We do a lot of Gatsby Gala parties and events. And then we [also] rent to theater people." Clothes are hanging on a long rack along the wall, and Craycraft and I shuffle down the aisle as she points to some pieces and pulls out others for a closer look. She gestures to some funky top hats on a high shelf. "These are my original steampunk designs." Continuing on down the aisle, "We do disco and '80s and crazy newscasters; little Pee Wee Herman, zuit suits. Here's a '70s three-piece. The age of polyester. Over here are some glamour gowns. We rent a lot of these to fashion shows and photographers."

She takes a sparkly gown off the rack and hands it to me. "You feel how heavy this is?" My arm dips a little; I didn't expect the weight. "Because it's all glass beads and metal, not acrylic, sequins."

When we get to the back room — and after she waves to the "fashion mistakes of the '80s" — Craycraft pushes a rolling rack to the side to show me her private collection. Some of the garments are from the turn of the century — hand-sewn, hand-rolled. Many have been given a second life thanks to her skill for restoration.

After the tour, after I've mentally played dress-up in several of her pieces, I ask Craycraft what she plans to do next. Even if City Council doesn't approve this rezoning petition, the land is prime real estate that, according to some, is under-utilized.

"We're going home to historic Monroe," says Craycraft. Backstage Vintage was started in "a hole in the wall" there, and now the city of Monroe and other organizations have offered her grants to revitalize a historic building in downtown. "I'm not going to sit here and wait for the wrecking ball to come through the window."

LAST MONTH, I became aware of the demise of another vintage costume rental shop because of Facebook. A photo of the glaring hole between two historic homes on East Boulevard where Magic Maze once stood had appeared on my social media feed. I didn't even know the 30-year-old business, overflowing with costumes ranging from Tweedle Dee and Tweedle Dum to 1920s chic, had closed.

Maybe it was the playlist I'd chosen — sad violin instrumentals — as I researched what had happened to Magic Maze, but I couldn't help but feel like I'd stumbled upon an autopsy report when I found the property's Certificate of Appropriateness issued by the Historic Landmarks Commission. The two-story home was built in 1928 and, due to structural problems and the dire need for repairs, was recommended for demolition.

Meeting minutes from October offer more details: "Staff has contacted the owner, who has expressed a firm intent to demolish the house and not to consider selling it at an appraised price. The house is zoned for commercial use. The house has been condemned as unsafe and is not occupied."

Jill Walker is the chair of the Dilworth Community Association Land Use Committee and a commissioner on the Historic Landmarks Commission. "We had someone go over to the building and inspect the building and what its condition was, in terms of restoration needs. It was so far gone that the cost to renovate and rehabilitate it was just prohibitive."

Magic Maze was started 30 years ago by Robyn Query. When she died in 2005, her husband, Stash, kept up the business until 2013, even as the house was deteriorating. After some disputes with the company managing the property, which included a rent increase but no repairs, he was ushered out.

Stash believes the property management group wanted him out of the building so they could charge another tenant more in rent. Before April 2013, he was only paying $500 a month for the 2.5 story bungalow.

A couple of weeks ago, he returned to Dilworth to see the house he spent more than 25 years living in with his wife — they'd even gotten married in the front yard — gone. He says the sight of the empty lot brought him to tears. 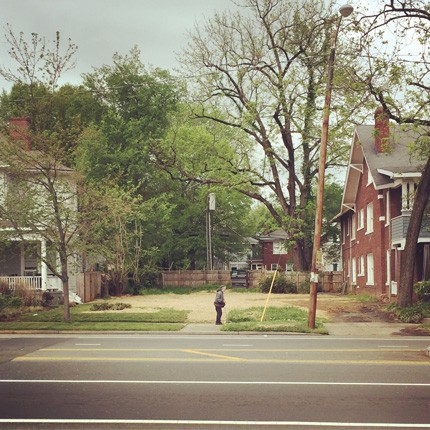 "I'm real sorry about the house," he continues, "but it was greed that took the house. Nothing but greed."

Stash still has most of the costumes that packed the Dilworth home, and he'd like to reopen Magic Maze. But with the high cost of rent, Charlotte is not so kind to small business owners without deep pockets nowadays.

"Who knows what's going to go there," says Walker, a Dilworth resident for 30 years. "Sure, I'm concerned. That's just one more piece of property you have to worry about what's someone going to do with it."

BACKSTAGE VINTAGE'S NEW home, come July, will be in a 2,000-square-foot courthouse built in 1875. It's twice the square footage she has now in Plaza Midwood.

Craycraft says although she's looking forward to the new location, she does not want to leave Charlotte.

This isn't the first time Craycraft has had to find a new home for "her babies" — the costumes she's scoured all over for when not at rehearsal. (She plays violon/viola in the Charlotte and Asheville symphonies.)

"We were in Asheville for four years, and the same thing happened to us. I'm standing in the store one day, and the owner comes in with a smile. 'Guess what? I sold the building for $2 million. You got seven days to move.' I had to see an attorney to fight for 30 days. We moved here, and it's happening again. It's just very upsetting."

Besides the pressure of having to close for a month or more for the move and oversee the new space's renovations, Craycraft also wonders if her regular customers will travel to Monroe to see her. There's a tentative hopefulness in her voice when she admits the launch of a website did triple her business. "Maybe we'll be OK."

As we wrap up our chat, Craycraft sees me eyeing what appears to me is an old record player sitting on the counter.

"Look. This is an authentic grammaphone." She points to a paper clipping taped to the side. "There's the original ad in Sears-Roebuck in 1910. It works. It's a little dusty, and it only plays these quarter-of-an-inch Edison records. You crank it up, it still works.

"They built things to last. Not today, it's a disposable society."