Abduction: Escape as quickly as possible | Reviews | Creative Loafing Charlotte
Switch to the mobile version of this page.

Abduction: Escape as quickly as possible 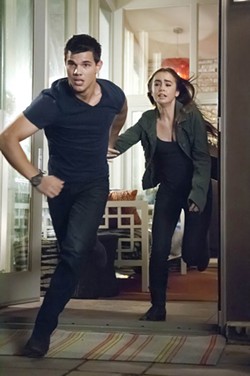 Sure, it's easy to pick on the Twilight guy. Because who's gonna rush to his defense other than smitten Team Jacob fans?

Make no mistake about it: Abduction (*1/2 out of four), in which Taylor Lautner is handed his first starring role in a motion picture, will never, ever, ever be mistaken for a good movie. But the declarations (from critics and Twilight bashers alike) that it's the worst picture of the year strike me as armchair grandstanding — hey, it may star a wooden werewolf, but at least it's thankfully free of any zoo animals who talk like Sylvester Stallone and Adam Sandler.

John Singleton, whose Boyz N The Hood remains continents removed from most of his subsequent work, slides further into irrelevance with a Junior G-Men-type tale that features a stellar supporting cast, some decent action sequences, and a leading man who reacts to every dire situation as if he's just been asked to clean his room. Lautner plays Nathan, a high school kid who has Ellen Ripley (Sigourney Weaver) for a psychiatrist and Lucius Malfoy (Jason Isaacs) and the Coyote Ugly bar owner (Mario Bello) for parents. When he and his classmate Karen (Lily Collins, whose performance is about as monotonous as most of daddy Phil's music) embark on a school assignment that inexplicably leads them to do research on a missing persons web page, they discover an old photo of a little boy who looks like a pre-Taylor Lautner Taylor Lautner. IMs are swapped, Euro-trash baddies arrive to blow up the house, and suddenly Nathan and Karen find themselves on the run. As these crazy kids try to discover why Nathan is being pursued by grown men who are clearly not Stephenie Meyer devotees, they must also decide whether or not to trust Doctor Octopus (Alfred Molina), the CIA agent assigned to the case.

Fifteen years later, I still fondly recall the priceless Siskel & Ebert moment when Roger Ebert dismisses the action flick Fled by stating, "I guess it sort of holds your attention while it's happening. I mean, something is moving on the screen, so you look to see what it is." (To which a laughing Gene Siskel retorts, "What a compliment!") Abduction inspires the same level of commitment: You look at the screen mainly because it beats staring at the auditorium walls.